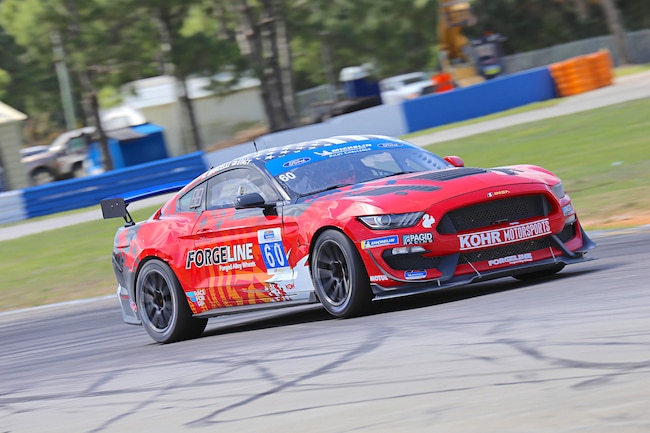 They scrapped and clawed, and one even lost a rear bumper cover, but time ran out on an incident-filled race before any pony pilots could ascend to the podium in a tight two-hour race around the 3.74-mile track in sunny Florida. Instead it was a pack of Euro entries filling up the top positions in the Grand Sport category.

A whopping six Ford Performance Mustang GT4s and 12 drivers, including some familiar names from the NASCAR Gander Outdoors Truck Series entered the fray for the IMSA Michelin Pilot Challenge race at Sebring International Raceway, dubbed the Alan Jay Automotive Network 120, on Friday March 15, 2019. However, only two of the entries would finish in the Top 10, with the highest finisher being the KohR Motorsports duo Kyle Marcelli and Nate Stacy in the Forgeline-backed #60 machine.

If you aren’t familiar with the Mustang GT4 it continues in the footsteps of the Shelby GT350-C as Ford Performance’s global GT4-spec road racer. Developed by Multimatic Motorsports for Ford Performance, this turn-key Mustang has proven quite successful in the IMSA ranks, but early in this season the cars have faced strong competition, with only one Mustang GT4 finishing in the top five at the IMSA season opener at Daytona International Raceway.

During qualifying on the famous but notoriously uneven Sebring surface, the top qualifiers turned 2-minute, 10-second laps, while Kyle Marcelli and Nate Stacy’s KohR Motorsports machine was just off the pace with a best lap of 2:11.51, which earned the sixth qualified spot. The duo was hopeful they could continue their good fortune in Sebring.

“It was a really big deal for us,” Stacy said. “It was our first race of the season and after that we proceeded to go for three more podiums in a row with two more of those being wins. We came back for the Encore in 2018 and were fortunate enough to win that one by a pretty decent margin. We have a big notebook to work off here, especially with the Michelins and just really glad we’re able come back and try for a three-peat this year.”

The only other Mustang GT4 qualifier in the Top 10 was the Multimatic Motorsports entry driven by Myatt Snider and Ben Rhodes, who placed 10th heading into the race, followed by Matt Crafton and Grant Enfinger in 13th; DJ Randall and Alec Udell in 14th; Rod Randall and Kenny Wilden in 18th; and James Pesek and Jade Buford in 22nd.

On race day in Sebring the competition was fierce with half of the Mustang moving up in the ranks during the race, while the other half fell behind their qualifying rank when the green flag waved. In the end, there was no three-peat to be had, but Stacy and Marcelli have the strongest finish of the Mustang GT4 entries, moving up to a fifth-place finish from their sixth qualified position.

The most impressive run, however, was by another KohR Motorsports entry driven by Kenny Wilden and Rod Randall, which had qualified at 18th, but moved up through the field to finish right behind Marcelli and Stacy.

“Had great race today finished sixth. Rod drove a great first stint going from 19th to 15th. I picked up a few more spots then on the last pit stop we went with only two tires, which got us up to fourth. But that put us at a disadvantage near the end as the tires where shot,” Wilden explained. “Caught some big slides over the bumps but hung on. Very hot cockpit today causing a painfully hot right foot. Had to keep moving my foot around on the throttle so my shoe would not melt; our other team car driver had his shoe melt. All part of racing most people don't see. Great team effort.”

In the end, the remaining Mustang GT4s finished well outside the top spots, with Alec Udell and DJ Randall in 11th; Grant Enfinger and Matt Crafton in 15th; Jade Buford and James Pesek in 22nd; and Myatt Snider and Ben Rhodes in 25th. “Not exactly how I thought it would go but a P5 finish nonetheless,” Stacy added. “Thanks to KohR Motorsports and Kyle Marcelli for a good run!”

Stacy and the rest of the Mustang GT4 drivers hope to improve their positioning on race day and in the points chase as the IMSA Michelin Pilot Challenge returns to action during the Acura Sports Car Challenge At Mid-Ohio on May 3, 2019.

Clearly the class of the Mustang GT4 field in Sebring, drivers Nate Stacy and Kyle Marcelli kept their KohR Motorsports machine in the mix for the entire race, moving up one slot from their qualified spot to finish fifth behind a pack of European machines that dominated the Alan Jay 120.
Fellow KohR Motorsports drivers Kenny Wilden and Rod Randall drove the wheels off their Mustang GT4 to move up 12 spots on the course to finish in the sixth spot.
Drivers Alec Udell and DJ Randall battled till the end against the competition and the fuel gauge to stay maintain an 11th place finish as their car wrapped the race on fumes.
Grant Enfinger and Matt Crafton, ThorSport Racing drivers in the NASCAR Gander Outdoors Truck Series, found the race challenging in Multimatic Motorsports retro-Motorcraft-liveried Mustang GT4, which qualified 13th and finished in 15th.
You couldn’t miss Jade Buford and James Pesek’s PF Racing Ford Mustang GT4 and its bright-pink paint scheme out on the course. Unfortunately, the duo couldn’t make up any ground during the race, as they finished right where they qualified in the 22nd spot.
The other ThorSport Racing NASCAR truck drivers, Myatt Snider and Ben Rhodes had a tough go in their Multimatic Motorsports Ford Mustang GT4, which qualified 10th, but finished in 25th. After and on-track dust-up, their ride lost some time and finished out the race with taped-up bodywork.