Battle in the Badger State 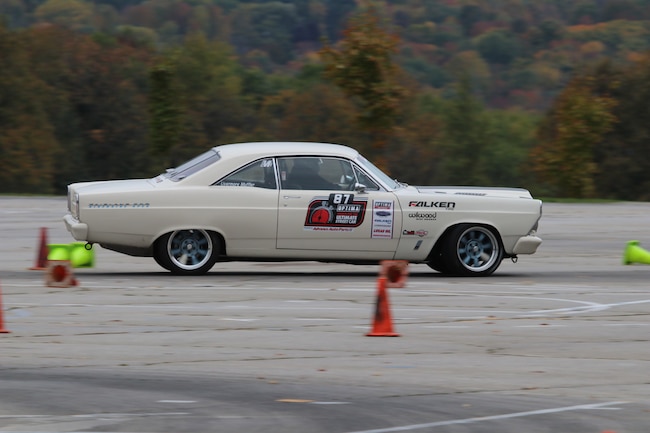 It was a banner year for Mustangs in OPTIMA's Search for the Ultimate Street Car Series, presented by Advance Auto Parts. A total of 35 out of 93 competitors in the Franklin Road Apparel GT class carried the Blue Oval emblem, but it was Jonathan Blevins' 2008 Shelby GT500 that led the way. De-tuned to just under 1,000 horsepower, he came into Road America with an eight-point lead and high hopes of taking home the first class championship for a Ford in series history.

Unfortunately, things didn't work out in his favor, as Eric Sheely's Camaro had it's best weekend of the year and Jonathan's Mustang answered with it's worst outing. The eight-point edge he once had turned into a 14-point deficit, but still well ahead of the rest of the pack. In an unusual development, Blevins' Mustang was the only one to compete at Road America that weekend. Why the low turnout? There were probably several contributing factors.

The Road America event sold out for competitors very early, so many who wanted to run may not have been able to get in. The forecast also called for rain all weekend and while it held off for Saturday, it did finally arrive on Sunday afternoon. Road America is a serious race track when it is dry and since this series runs rain or shine, some may have opted not to push their luck on a track with known treacherous areas like “The Kink” and “The Carousel.”

It all came down to the final event for Jonathan Blevins and his 2008 Shelby GT500. He gave it his all, but came up just short for the Franklin Road Apparel GT Class championship. However, it was a very solid year for Mustangs, capturing three of the top-six spots.

However, one big reason many Mustangs may have stayed home, is because eight of them had already qualified for the OPTIMA Ultimate Street Car Invitational (OUSCI) and the turnaround between this event and Las Vegas is relatively short. The only significant points battle remaining was at the top of the class and while the Schoch brothers could've brought their Mustangs out to challenge for a top-10 finish in points, they both knew they had invitations to Las Vegas sewn up.

Mike Gallagher took a different approach with his 2016 Focus RS. Gallagher knew prior commitments would prevent him from making it to Vegas, even though he knew he had the points in the bag. That turned Road America into his Superbowl and he aimed to be the only Ford to finish in the top-10 in the brutally-tough RECARO GTS Class. Gallagher had his best performance of the season, but came up just five points outside the top-10, although he did net a top-five finish in class on the weekend.

It was another standout season for Mike Gallagher's 2016 Focus RS. Of the five that run in the series, none came close and the list of cars that finished behind him in the standings include Corvettes, Vipers and Porsches.

In a cruel turn of events, Pat Sheely, who has (at least) two Focus RS parked in his garage, ran two different cars during the season, easily accumulating enough points between them to qualify for Las Vegas. However, series points follow the driver/car combination, so his totals were split between the two cars. However, his son Eric, not only made the cut, but won the Franklin Road Apparel GT Class and his teammate, Wes Drelleshak, also qualified, so Pat will be there to support them both.

It may look subtle and understated, but there's a lot going on with Pat Sheely's 2017 Focus RS. Look for it to move up significantly in the standings in 2019 and make a run all the way to Las Vegas.
The next generation is hard at work, honing their skills in this series. Logan Kepler's dad, Steve campaigns a Nissan GT-R in the series but on this weekend, he was there to support his son. The RECARO GTS Class is an absolute grind at every track, but Logan uses the competition to sharpen his blade.

If you can't make it to the SEMA Show or the OUSCI, you can catch it all on the TV series, which airs every weekend on MAVTV, starting Friday nights at 8PM Eastern & Pacific. If you'd like to get in on the action for 2019, head over to www.DriveOPTIMA.com where the rules and schedule will be posted.

Never let it be said that the LucasOilRacing.tv Road Rally isn't a difference maker in this series. That segment, like all the others is worth up to 100 points. John McKissack's 1966 Fairlane battled various mechanical issues in his first two events this season, which prevented him from grabbing those valuable points. Had he been able to complete those rallys, he'd be preparing for a trip to Las Vegas. His car is certainly capable and we look forward to seeing his return to full strength in 2019.
The wildest entry in the entire series might just be Henry Crawn's 1968 F100. It's rare to see trucks competing, but especially unusual to see one that has a Powerstroke swap. It debuted in mid-season, so it didn't really have a chance to show what it can do yet, but we expect Henry will further refine it in the off-season and bring an absolute beast out in 2019.
This Mercury Cyclone just emerged from a nearly two year build at D&Z Customs and ran in the exhibition class at Road America for shakedown purposes. The builder, Randy Johnson, knows his way around the series and right out of the box, the 3,600-pound Cyclone was laying down times on the Detroit Speed Autocross that were among the leaders. Look for more of this car at SEMA and beyond.