Racing the Hurricane on Drag Week! The weather has been a bit of a pain in the butt on this year’s Drag Week, as Hurricane Florence edges ever closer to the East Coast, but they are getting some racing in before it gets wet, and Day 2 saw brief action at Darlington Dragway in Darlington, SC.

In typical Drag Week fashion, the first long-haul drive would prove to “make it or break" it for a number of racers. That's really where one finds out how well the car can handle both racing and the challenges of the street. The route from Atlanta to Darlington was also plagued with rain pretty much the entire route, adding to the stress. Roadside repairs in the rain are never fun!

The next day, everyone was greeted to sunshine and a few clouds, something that was very much welcomed despite the heat index hovering around 116 degrees! All participants were able to get in their one required run—and then some—and the event was able to run the entire scheduled time.

One of the big changes for Day 2 was the cancellation of the required route. With Florence barrelling down on us, evacuations were started around noon. To help ease any confusion or possible issues along the route due to this, the Hot Rod staff decided to let all participants head directly to Concord, NC, bypassing the previously required checkpoints (a first in Drag Week history).

Let's see what Day 3 at xMAX Dragway in Concord has in store!

While not technically a Mustang, it’s still cool to see a Cougar kicking ass on Drag Week. This is Scott Miller’s ’68 cat which is atop the Street Race Big Block NA (naturally aspirated) class with a 9.15 at 146. The Street Race class is called the “8.50 class” due to its rollcage restrictions.
In the power adder (PA) segment of Street Race, the most hotly contested class on this year’s Drag Week, Alex Corella’s ’93 LX coupe is in the hunt with a Bullseye turbocharged 308ci engine. 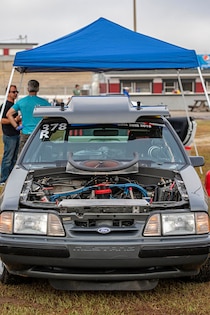 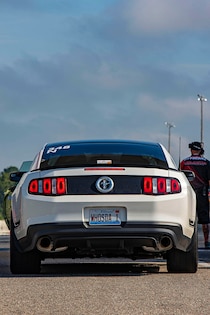 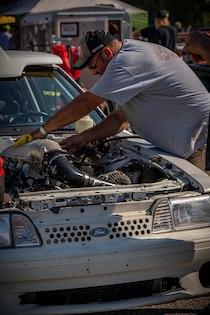