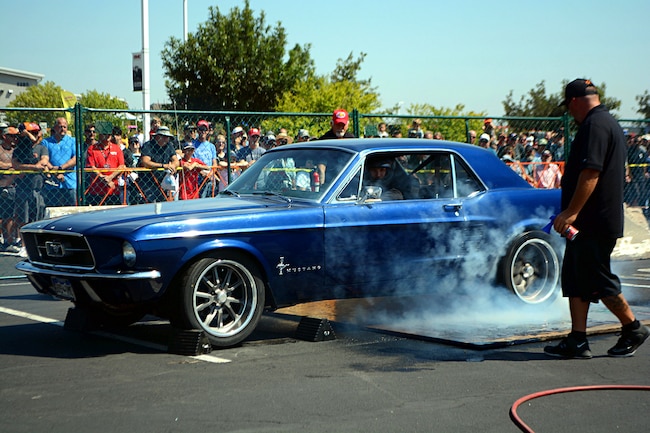 Colorado may not be the first place you think of when talking about world-renowned, extremely rare, or top-notch performance Mustangs, but at the 2018 Goodguys Colorado Nationals just a couple weeks back, that's exactly what we found, and then some! Take a peek below for some of the highlights and don't forget to scroll all the way down to the bottom for an extensive photo gallery from the show!

While well known for their hot rods and customs, the Goodguys Rod & Custom Association has also made a name for itself in the muscle car world. With any American-made or powered vehicle from 1987 or before being allowed to show on Fridays and Saturdays, and anything classified as American being allowed to show on Sundays at the organization's events, muscle car staples, including the beloved Mustang, have become a regular thing at their 20+ national shows. And we're not just talking about your “regular” Mustangs here.

While there were certainly Mustangs of all conditions, model-years and performance levels in Colorado, the community was done proud with the immense showing of fastbacks, coupes, and convertibles superior in one way or another to the norm. Among them were a '68 “Real Deal Shelby” 302ci, 4-speed car; an autocrossing '67 GT S-code 390ci 4-speed car; a 2016 Richard Petty car; a brand-spanking-new GT350; and even Gary Fish's '67 with a supercharged Coyote under the hood, which made its debut at the 2017 SEMA Show in Las Vegas. Whether it was vintage classics, total customs, or modern muscle enthusiasts were after, Colorado didn't disappoint!

Looking around the show, which boasted about 2,000 entries this year, Mustangs made up a good chunk of the show cars Friday and Saturday. Unfortunately, we only saw two Mustangs take on the autocross course those days (a lime-green Fox Body and that custom '67 390ci V8-toting car we mentioned earlier), but that quickly changed come Sunday morning. Once the coveted awards had been decided and the more modern American cars were let through the gates, the autocross course was brimming with Fox, SN-95, S-197, and S-550 varieties. And boy, did they put on a show.

We certainly enjoyed taking in all the unique Mustangs that made appearances at the 2018 Goodguys Colorado Nationals and we can't wait to return next year! Don't forget to check out the photo gallery of some of our favorites below.