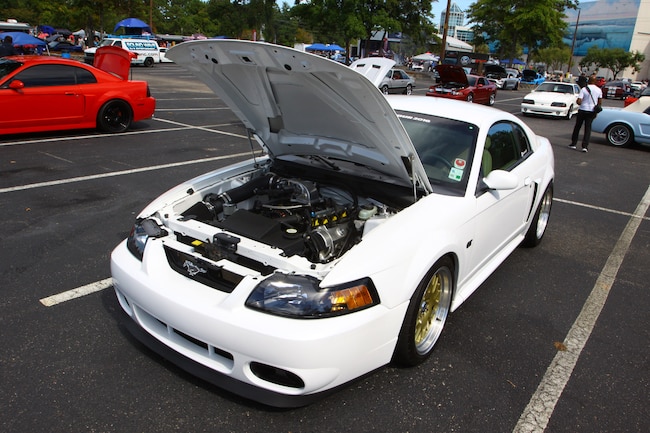 We editors are regular car nuts like those of you reading this, which means we of course have our own opinions on what’s cool, and what really gets our tires burning, if you will. So while walking around the CJ Pony Parts Mustang Week Car Show at the Myrtle Beach Convention Center, we were talking about which cars we each liked, so we put together this story on our favorites from the show.

The editors are Rob Kinnan, Mark Houlahan, and Michael Johnson, along with Mike’s son Drew Johnson, who we pressed into service throwing a camera at him and putting him to work. These picks are completely subjective meaning they are filled with our own biases and desires, taking away nothing from any other of the fantastic Mustangs of Mustang Week. So check it out and let us know what you think of our faves.

There were a lot of Mustangs at this event that tripped my trigger, but having been forced to pick one, I chose Mack Osbourne’s 1966 fastback. Located inside the Myrtle Beach Convention Center, Mack’s Mustang was my choice for no other reason than it was an example of the car I’d build myself. Unfortunately I could never track Mack down so the technical details on the car are sketchy at best, but essentially it’s a mild restomod fastback with ocean-deep black paint (with silver stripes a little wider than traditional Le Mans stripes), a red and black interior with TMI upholstery, carbureted pushrod small-block, 4-speed (at least that’s what the shift knob indicates), 5-spoke Rocket Racing wheels, and just an overall great look. There’s nothing gimmicky going on here—nothing out of the ordinary really, no “gotcha!” aspect, and there are a few small details I would change (like lowering it front and rear an inch or so), but the fastback just looks “right” and is not so radical that it would be hard to duplicate or drive. And with air conditioning, a comfortable but stock-looking interior, stock-based suspension, and just enough aftermarket parts to make it affordable and un-complicated to build, I would drive the wee out of this car. Good job Mack!

If you want a tough job to handle consider what I just had to do! I was tasked with walking roughly six miles of show cars at Mustang Week (according to my Samsung Health app) and picking my ONE favorite. Yes, it was a tough job. Being an owner of a ’66 Mustang and a ’90 Fox LX 5.0L hatch you’d think I’d focus on those generations right? Well indeed I love those years, and in fact love them all. From the ’65 hardtop with inline-six to the Mustang IIs, Fox-era, and up to the newest S550. If I had the money I’d have a garage filled with one of each! So yes, it was no easy task. That is until I came across Danny’s S550 GT Premium fastback in the Croftgate USA display at the show and stopped dead in my tracks.

My Fox is Medium Cabernet Red, which is a burgundy color. It’s always been a favorite of mine (much like Vintage Burgundy on the first gen Mustang) and ever since the ’18 was released with its one-year-only Royal Crimson Metallic color I’ve been in love with it as well. So much so that I convinced our staff to paint our ’67 Mustang Week to Wicked project (with 2018 Gen 3 Coyote 5.0L engine swap) Royal Crimson Metallic as well! So when I saw Danny’s Royal Crimson Pony sitting oh-so-right on those Avant Garde M621 wheels I just stood there soaking it all in. No disrespect to any other Mustang at Mustang Week this year, but if I had an ’18 Mustang it would be Royal Crimson and look JUST like this!

Besides the wheels (20x9 front and 20x11 rear wrapped in Nitto 555G2 tires), the stance is courtesy of a set of BMR lowering springs. Under the hood the fun factor was upped with a ProCharger D1X pullied for 9-10 psi, coupled with Injector Dynamics id1050x injectors and a JMS FuelMAX to supply enough fuel for the boosted Coyote. Tuning was handled by Rick Erdman using an SCT BDX handheld tuner. The combo hasn’t seen the dyno yet, as they got it ready just days before Mustang Week, but Danny tells us it should be good for 650-plus horsepower at the tires.

While Danny has keep the Premium 400A package interior intact, he’s added a little extra boom to the factory SYNC 3 system in the form of a JL Audio 500/1 amp pushing a JL Audio 12W6 sub in a custom trunk enclosure built by Brad Gebhardt at Carlton Customs in Greer, South Carolina. Future plans for Danny’s Royal Crimson ride include Viking shocks and 17-inch Weld RT-S 71 “big and littles” (beadlocks out back of course) to hit the drag strip along with a one piece Driveshaft Shop aluminum driveshaft. We can’t wait to see Danny’s S550 make that first hit!

It’s no secret that Fox Mustangs are uber-hot right now. One of the many people responsible for Next Level Fox builds is Robert Miller. He’s put together a few in the past couple years, and he is one of the many Mustang enthusiasts who have taken Fox builds to another level by adding contrasting colors both inside and out, and bigger wheels and tires at a time when most Fox Mustangs wore a drag wheel setup (not that there’s anything wrong with that). Along with the bigger wheels and tires, Robert is also one of those guys who pioneered the in-the-weeds stance, as well.

His latest build is a 1987 Mustang LX affectionately known as “Sandy,” after its color Sand Beige. Instead of changing the color, realizing how rare the color is with just 47 built, he stuck with it, and most everyone has fallen in love with it. I have, which is why I chose it for my Mustang-360 Editor’s Choice from Friday’s CJ Pony Parts Mustang Week Car Show.

The car’s color is just the tip of the iceberg, though. If it was just a stock LX in Sand Beige, I’m not sure if it would have the following it does. I think it has the following because of Robert’s vision. The 1995 5.0L engine is accented with Sand beige touches, but it also features Edelbrock Victor Jr. heads, a Trick Flow Box R intake, and more, to make 401 rwhp with a Carolina Performance tune through a Tremec TKO and a Flowmaster 3-inch exhaust.

Perhaps the reason everyone loves Sandy is its stance. She features Maximum Motorsports coilovers up front with Tokico adjustable struts, along with the Maximum’s Weight Jacker lower control arms and springs out back. Satin bronze Rovos Durban wheels finish off the car’s attitude, and are wrapped in BFGoodrich rubber. Furthermore, to tie everything together, the car wears a Maker’s Garage front splitter and several other accents to match the Rovos wheels. The contrast between the Sand Beige and Satin bronze additions is one of the main reasons Robert’s coupe is my pick, but the car’s overall execution is why it’s loved by many, and not just me.

Owning a two-valve car myself, I may have a small amount of bias, but the simple look of the car’s Oxford White paint mixed with gold XXR wheels immediately caught my eye. The car has a perfect stance with Viking coilovers and Strange Engineering shocks and struts. Colby’s 2001 Mustang GT is his first car, and he’s done all the work on the car himself.

Even though my car is largely stock, Colby’s car serves as a good example for ideas that I would like implement on my car. For his hard work, Colby received an Award of Excellence at Mustang Week.