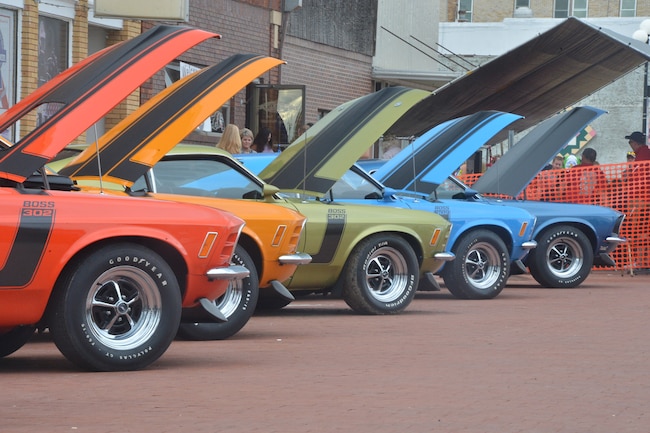 When your last name is Boss, and you own Boss Motors, and you bought a Boss Mustang brand new in 1971 and still own it today, maybe life is telling you something. Maybe you should have your own Boss Mustang car show?

Greg Boss’s friend Rick Ybarra brought up this subject at the Muscle Car Nationals in Chicago in November of 2016. At Rick’s insistence, Greg had trailered his 1971 Boss 351 to the huge indoor Muscle Car and Corvette Nationals (MCACN) show for a 45th anniversary Boss 351 display.

“Rick kiddingly said, ‘you know, Boss Motors is going to be celebrating their 80th anniversary in 2018. Why don’t we have a Boss national car show there in Marysville?,’” Greg said. He answered, “You’re crazy. Marysville is a town of 3,200 people. We don’t have a drag strip. We don’t have a road race course or anything like that.”

Boss already knew of 13 Boss Mustangs in the immediate area around Marysville so in the next few months he kicked around the idea with various friends.

One of those friends was Marc Bodrie from San Diego, California. Bodrie told us, “We all go to shows that are big—you know Woodward [Detroit], Knott’s Berry Farm [Southern California], Mid-America [Tulsa]. Marysville, Kansas, this little Mayberry of a town?”

To get gauge national interest, they put the idea on Facebook and Ybarra says, “It exploded.” Apparently, something about the harmony of the Boss Mustang brand name and Boss Motors in the heartlands of America clicked with people. “Everybody thought Marysville would be a great location, the center of the country, where we could draw from everywhere.” Standing on the red brick streets of Marysville, Ybarra pointed to Boss Mustangs from Seattle, San Diego, Florida, New Zealand, and Australia. We could add many more states—Kansas, of course, Wisconsin, New Hampshire, New York, Missouri, Oklahoma, Texas, and many more.

The event took place with registration and a cruise in downtown Marysville, where Boss Motors is located, on Friday, September 7, 2018. Registration continued Saturday morning. Hotels in town filled up as did the bricked streets on Broadway Street. A huge poster on a table in front of Boss Motors gave guests the opportunity to add their signature and a get-well message to Greg’s daughter, Michelle, who helped organize the show and then missed it with a broken leg.

Tony King displayed, on a series of engine stands forming a “train,” five engines consisting of a Boss 494 out of Mario Andretti’s car, an aluminum block 494 Boss 429, a Boss 302 with in-line carburetors, a 427 NOS Cammer motor, and an iron head Boss 429.