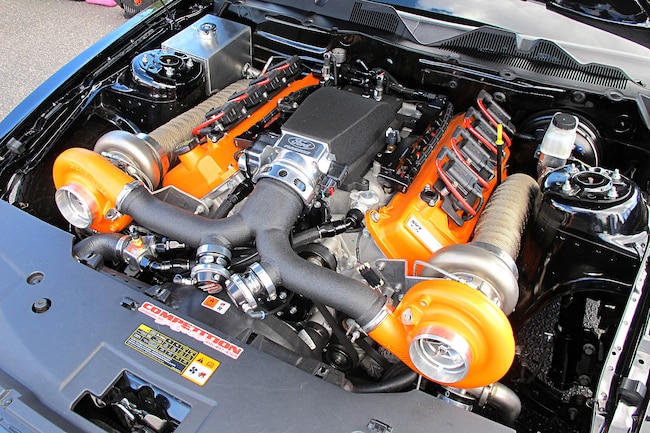 There’s something quite magical about the feeling boost has on one when in the driver’s seat. As you roll into throttle and the boost begins to ramp up, setting you back in your seat, it is like no other feeling out there. Adding boost is one of the most efficient ways to make horsepower and torque as well, which is why the majority of manufacturers are switching over to small displacement turbocharged engines that provide the power of larger engines in smaller packages that use less fuel. While the EcoBoost has been a great platform for Ford we’re not just talking about them here in our gallery.

Sure, there were plenty of EcoBoost and factory supercharged Mustangs at Mustang Week, but we’re talking about aftermarket blowers and turbo kits here. They’ve become big business today, as it is one of the quickest ways to the power levels owners are looking for. Not to mention that the old way of improving an engine (cylinder heads, intake, camshaft, stroker kit, etc.) are much harder to do on Ford’s modular and Coyote engine platforms. Just bolting a blower or turbo onto one of these is actually faster and cheaper than upgrades we all remember from the pushrod hop-up days of yore. This is why supercharging and turbocharging late-model Mustangs is such big business. That said, we did spot some old school setups, including an Incon turbo kit, a B&M 144 roots blower on a Fox, and some good old fashioned 8-71 style blowers poking through hoods with “bug catchers” on them. If you’re a fan of boost then this gallery is for you!