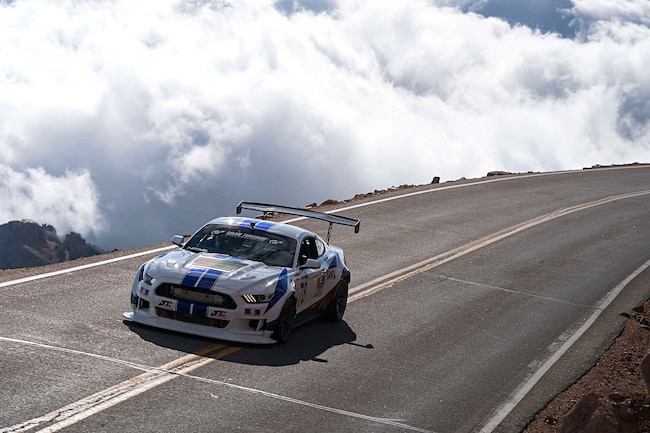 “It goes back to around 1996, when I got involved in the import world,” explains Kash Singh, a Zone Manager for Ford in Seattle. “I had a Honda Accord, and I did the whole car show scene. When you’re building show cars you have to build some sort of performance aspect into it, and that got me started. I did some drag racing around that time too, but I really cut my teeth carving the canyons of Southern California when I got my Nissan 350Z in 2002, right after they were introduced.”

Singh would end up moving to Texas in 2004 after being hired by Ford, and the demands of the new gig put his racing aspirations on hold for a bit. “Eventually I found myself getting bored, so I decided to get a 2008 Mustang GT500 as a fun car for the weekends. I started competing with that car at a couple of local events; autocross and that sort of stuff. I was running a few bolt-ons and the car dyno’d at about 550 rwhp, which was a lot of power at that point.”

He says that while the car was a fast runner, he really had no plans to turn it into a full-fledged race car at any point. “One day, some lady on a cell phone rear-ended my girlfriend, who was following me in my company car, and pushed that car into the Mustang,” he says. “There was enough damage that they were going to have to cut the back section of the body. By then I was already determined to run at Pike’s Peak, and I had purchased a Focus to build for the Rally class. I later realized that the GT500 wasn’t going to be a collector’s item or something like that after the accident, and I started thinking about how great it would be to have 500 horsepower to start with in a race car; all I’d need to do was a few suspension tweaks, add some safety gear, and go racing.”

Kash got his start in the hot rodding realm through the import world, initially focusing on show car builds. He then decided to try his hand at the dragstrip before discovering his true passion for road racing.
Because of the constant on-throttle demands of hill climbing and elevation involved, Pikes Peak isn’t particularly kind to supercharged engines. Kash found that when he move to a turbocharged setup with his EcoBoost Mustang, the engine responded better on the hill than his GT500 had, so his new GT sports a pair of Garrett snails that help the Coyote 5.0L make about 700 horsepower at the wheels.

That’s exactly what he did, competing for his first time at the annual hill climb event in 2011. “That same year I got sent up to Detroit by Ford, and I met a bunch of the guys who worked on the Mustang team,” he recalls. “And I remember sitting in meetings and someone would say, “Wait a minute, are you Kash? The guy who races that Mustang?” They actually had pictures of my Shelby up in their offices from different features that had been done on the car.”

As much as the team admired Kash’s effort, even some of those folks were surprised by his steed of choice for the dangerous, and highly technical, race. “It’s a muscle car; it’s big and heavy with that cast-iron block, and even engineers were saying, “What are you doing racing this thing up Pikes Peak? You’re going to overheat with the high altitudes.” Meanwhile I was falling in love with what would become the 2015 Mustang, which they were working on in the design studio. I remember asking the team what they thought I should run at Pikes Peak. Now, I’m a V8 kind of guy, so I was a little surprised when everyone in the room said EcoBoost.”

The rationale was largely based on weight savings; the EcoBoost would be the lightest Mustang on offer, and Ford Racing already had plans for the boosted four-cylinder powerplant that would give it enough guts to make it worthy of the demanding race course.

Kash heeded their advice. Now living in Seattle, he drove a new EcoBoost Mustang straight from the dealership to Revolution Speed Shop to prep it for the Production class in the 2016 hill climb event. “We put in safety equipment and exhaust, and that’s it,” he notes. “Some teams had a pretty loose interpretation of the class rules, like the Toyota team that came out from Japan with a Scion FR-S that had carbon fiber bodywork from the TRD catalog.” A pair of Dodge Viper ACRs were in the class as well, one which had Lexan windows and the other a racing gearbox.

Since he started competing at Pikes Peak in 2011, Singh has always driven his car to the event from his home rather than trailering it. From Seattle that’s about 1,400 miles each way.
While weather took its toll on Singh’s official lap times, he says that his section times during practice on the dry weather days equated to a feasible time in the 11-minute range in the dry. Next year he’s gunning to get in the 10s – weather permitting, of course.
“I loved my Shelby, but this new car is a totally different animal,” Singh tells us. “Forgestar got us a great set of wheels, and when we matched those up with the Pirelli Trofeo R tires in practice, without even trying I was already beating my qualifying times in the Shelby.”

But rather spoil the fun for the field by protesting, Kash decided to just see how things shook out. “I fell in love with turbocharging up there,” he says. “There were some sections where the car pulled harder and ran faster than my Shelby had, which had twice the power. I had to change my driving style a bit though. I was used to basically point and shoot driving with the Shelby, just drag racing from one corner to the next. With the EcoBoost I could use a little more finesse, but I also had to make sure to keep the turbos spooled up all the time to prevent it from bogging out of the corners.”

Singh found himself missing that low-end power though, so for the following year he decided to swap out the EcoBoost Mustang for a 2017 GT, and the team threw on a pair of Garett turbochargers for good measure. Armed with ample grunt across the powerband, he was ready to step things up for the 2017 event. But fate had other ideas. “It was making a ton of power, but we didn’t get to finish the race,” he says. “I was running personal bests in practice, but I had to pull out of the official run because of rain and fog.”

2018 was a similar story for Singh and his team. “It hailed and snowed, then it backed off,” he notes. “At one point, I came around a corner a little past the halfway mark and there were two goats butting heads in the middle of the road. Trying to race Pikes Peak on a sunny day is a challenge. It’s even harder when the road is wet, it’s foggy, and there might be goats waiting for you around the next turn!” Despite the challenges he managed a run time of 13:22, almost a minute faster than his personal best with his previous race car.

The Mustang’s fenders have been flared to get more grip under the car. Kash runs 315mm-wide rubber at all four corners on 19x11-inch wheels.
“This is really a hobby. I’m not at the track every weekend, I just couldn’t do that with my lifestyle,” Singh says. “Pikes Peak is my vacation every year.”

The team almost missed the event entirely, as it turns out. “While we were testing to prep for the race, we got to about 690 horsepower on the dyno and the engine started smoking. So we tore it down and sure enough, we killed a piston on the factory bottom-end two weeks before I was supposed to drive out for the event. It was a mad dash to get all the parts, and that’s when we reached out to JE to get pistons and rods. They stepped up and it came together at the last minute. The car was finished Wednesday night and we drove it out there Friday morning.”

Looking toward next year’s event, Kash is optimistic about his prospects. “This year I wanted to get into the 12s,” he notes. “With my qualifying time and my two practice sessions, it actually added up to about 11 minutes. So the plan is to get this thing in the 10s next year.”

He’ll be driving the Mustang there and back from his home in Seattle, naturally. “I’m just an average dude that goes and does this insane event,” Kash says with a laugh. “The idea that I could be running with some of these pro racer types is just an awesome thing.”

“Another thing about Pikes Peak; everybody wants to help,” Kash says. “When it started hailing, some guy called out to me to pull my car underneath his tent. Then the officials called for mandatory rain tires, which we didn’t have. One of the other teams just came over and offered to bolt up their wet tires to my car.”
Along with the Pikes Peak events, Singh plans to race the Mustang in Global Time Attack events later this year, most likely in the Unlimited class.

Reader shares the story and photos of his muscle mustang or other fast ford. This week is Michael Watts and his 2017 Mustang GT.