Ten Years of the Big Show in Vegas 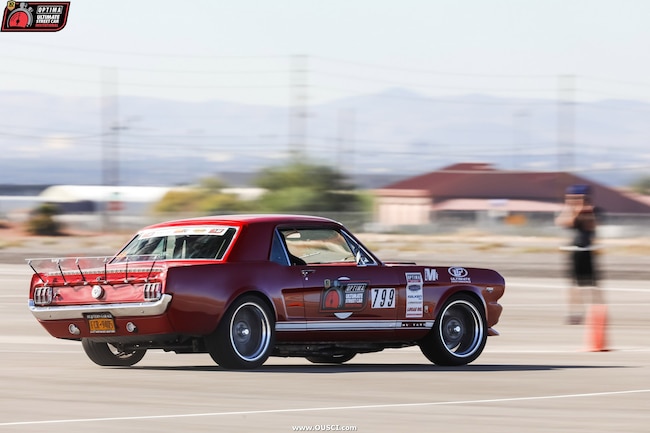 OPTIMA's search for the ultimate street car started at the SEMA Show in Las Vegas back in 2008. It was at that show, that OPTIMA's Director of Product Development & Marketing, Cam Douglass, saw the vehicles on display and asked how many of them could be driven on public roads, let alone enjoyed on a race track? When that question was asked, others clearly had a similar interest because nearly 30 cars agreed to head out to Spring Mountain Motorsports Ranch to find out. Most didn't make it through the weekend.

Over the course of what became the OPTIMA Ultimate Street Car Invitational's ten-year history, the event has undergone several transformative changes. In the initial years, the field was assembled from vehicles already at the SEMA Show. While an increasing number of cars were able to finish the weekend, vehicles at other high-performance events, like open road races, began to receive invitations, which included entry into the SEMA Show and made for larger fields that had even less attrition throughout the weekend.

By 2010, one-off qualifying events like the Faceoff at Road America began popping up, which helped identify potential vehicles to invite to the OUSCI and SEMA Show, where OPTIMA started a car corral to display many of the vehicles headed to the competition. The popularity of those events increased to the point that a full qualifying series began in 2014, complete with coverage on national TV.

Cliff Elliott's 2016 Mustang GT was the runner-up in the regular season Franklin Road Apparel GT Class points chase and was the top-finishing Ford at the OUSCI.

Now, several hundred vehicles compete each year in OPTIMA's Search for the Ultimate Street Car series, for the chance to make it to Vegas. This year, the search began in March at Las Vegas Motor Speedway and that is where it ended on the first weekend in November. After seven events, in seven different states over eight months, nearly 100 cars converged on Las Vegas Motor Speedway for the grand finale. The 2017 field represented some of the world's very best all-around, most-capable street cars. While this event doesn't run a drag race segment, when many of the top contenders do hit the strip, most run deep-11s and some go well into the 10s and they do it not on drag radials, but 200-treadwear street tires.

The segments these cars do run basically puts them to the ultimate test in every regard, covering acceleration, handling and braking. They do it all in cars that aren't stripped-down, purpose-built race cars with license plates, but impeccably-built machines that hold their own with the very best the SEMA Show has to offer. While Ford power has only captured one title (Bruce Cambern's 1966 Cobra in 2009), the brand has been well-represented throughout the years, including 2017.

Cliff Elliott and Mike Maier's Mustangs are both regular competitors in the qualifying series and they were the top-finishing Fords in this year's field. Although the two pony cars had a tie score, the Lingenfelter Design & Engineering Challenge score serves as the tiebreaker, giving the edge to Elliott's Mustang.

Jason Terry's 2014 Fiesta ST is his daily driver with over 90,000 miles on the odometer. He drove to SEMA from his home in California, received a golden ticket invitation to the OUSCI, ran all weekend and drove back home.

The OUSCI still invites ten vehicles to join the field at each event. This year's “golden ticket” invitees included Jeff Allen's Roush-powered 1963 Falcon, Jeff Lacina's 2017 Focus RS which came directly out of the Ford booth and Jason Terry's daily-driven 2014 Fiesta ST. We're happy to report all of those vehicles more than held their own throughout the weekend.

Bruce Cambern's 1966 Cobra won the 2009 OUSCI and he returned in 2010 with his 2005 GT, which finished third that year. They represent the two best finishes by Fords in the OUSCI's 10-year history.
While the OUSCI is about finding the ultimate street car, there are always other aspects of competition within the competition. Mike Gallagher was very excited to see Jeff Lacina's Focus RS get an invite, so he could have another RS to measure his own against. On this weekend, it was Gallagher's RS that came out on top.
The OUSCI really pushes all competitors to prove their vehicles are capable of performing on public roads, as well as the track. Even after they've survived the traffic jam known as the SEMA Show exit parade, competitors are still required to complete the Lucas Oil Road Rally.
The Saturday night LucasOilRacing.tv Road Rally sent the entire field to the South side of Las Vegas for a delicious meal at Shelby American headquarters.
To the victor goes the spoils. Ken Thwaits gets to take home some serious hardware for his victory at the OUSCI. His vehicle will also be placed in the OPTIMA Batteries booth at the 2018 SEMA Show and he is the first competitor invited to the 2018 event.
Hundreds of cars compete each year for the opportunity to make this field. The 2018 schedule has already been announced at www.DriveOPTIMA.com, so if you want in on the action, start making plans now!