Making the Cut at Barber 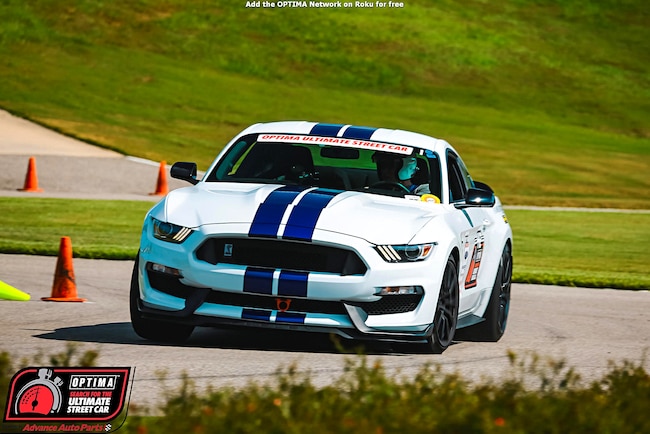 OPTIMA's 2018 Search for the Ultimate Street Car, presented by Advance Auto Parts, headed South in early-August and the heat was on as competitors squared off against each other in six different classes. The largest class in the series is the Franklin Road Apparel GT Class for late model cars and trucks and a 26-car field rolled into Barber Motorsports Park to do battle. The GT Class is limited to two-wheel drive vehicles that are not two-seat coupes, so that allows traditional Mustang versus Camaro versus Challenger rivalries to play out in spectacular fashion.

These aren't just base models going after it, but a field with Shelbys matching up against ZL1s, 1LEs and Hellcats. For the first four seasons of this series, Chevys have had the upper hand, thanks in large part to Bryan Johnson's Camaro, which has won the last three regular season championships. However, Johnson has yet to run in an event this season, which has left the door wide open for anyone looking to claim the title.

Not only did Mike Maier's Mustang catch a ride all the way from California on the Falken Tires hauler, but he brought his wife, Brianne, with him. She did a great job of managing tire conditions and making other wives and girlfriends look bad for not knowing their way around cars.
The LucasOilRacing.tv road rally proves all of these cars aren't just built for track use. The cruise around Leeds, Alabama was much hillier and greener than many of these folks are accustomed to at home, but very enjoyable and ended with a free dinner courtesy of FireAde.
Jonathan Blevins' 2008 GT500 is the leader of the pack, taking home the win in the Franklin Road Apparel GT Class and the overall points lead in the series.

Jonathan Blevins' GT 500 didn't need much prompting, as it took the points lead early this season and hasn't looked back. However, his Mustang's performance is not an anomaly, as the Mustang GTs of Cliff Elliott, Mike Maier and others have also turned in impressive performance at multiple events this season. Perhaps the biggest sign of a power shift came at Barber Motorsports Park, where Mustangs not only swept the podium, but took the top four spots in the Franklin Road Apparel GT Class.

Blevins pulled out a tight battle over John Laughlin's 2016 Mustang GT for the class win, but since Blevins already earned an invitation to the 2018 SEMA Show and OPTIMA Ultimate Street Car Invitational (OUSCI), the invite went to Laughlin. Elliott came home in third and Mike Maier finished fourth, with the top four separated by just 17 points. However, the margin from fourth to fifth place was more than 30 points, so that lead group didn't just win, they did it in dominating fashion.

Henry Crawn's 1968 F100 now rides on a Crown Vic chassis with a 6.0L Powerstroke crammed inside. There is a walk-around video and interview on this truck on the Ultimate Street Car Association Facebook page at the FireAde Welcome Party.
David Griffin is a longtime competitor in the series, who knows he may not run at the top of the standings, but always has a smile on his face. SPECTRE Performance recognized his positive attitude and extended a Spirit of the Event invitation to the 2018 SEMA Show and OUSCI to David's 2006 Mustang.
TCI Engineering sponsors the First Timer Award, presented to the top-finishing first time competitor at each event. In addition to a framed award, Michael Calamaras also received a full refund on his entry fee!

In the QA1 GTV Class, two Fords had a big impact in the Lingenfelter Design & Engineering Challenge. Robert Britton's immaculate '65 fastback finished fourth in class and Henry Crawn's radical Powerstroke F100 finished fifth. Those two builds are relatively-new to the series and as they get their combinations dialed in, we expect to see them both climb higher in the overall standings.

In the RECARO GTS Class, Mike Gallagher's 2016 Focus RS continues to carry the torch among Vettes, Vipers and GTRs. Gallagher had a very solid weekend, posting top-ten overall finishes in both the Lingenfelter Design & Engineering Challenge and the Detroit Speed Autocross. His fifth-place finish at Barber moves him into fourth place in the season-long points chase and in excellent position to secure an invitation to the OUSCI at the end of the season.

An outside observer might suggest a Focus RS versus a Lamborghini Huracan is a knife in a gunfight scenario, even with a heavily-modified car such as Mike Gallagher's 2016 RS. You'll never hear that cry from Mike though and with his top-ten overall finish in the Detroit Speed Autocross, he proves it.

There are now two events remaining in the regular season and plenty of Fords looking to make some noise. If Mike Maier can get his Mustang into Auto Club Speedway, he could shake up the standings and punch his ticket to Las Vegas. Matt Alcala could do the same thing with his vintage Mustang in the QA1 GTV Class. The Sheely Collection has also fielded a Focus RS in different events this season and could bring that back out to make some noise down the stretch. There are also expectations that Henry Crawn's diesel F100 will be back at Road America and could be joined by a freshly-built 1969 Mercury Cyclone out of D&Z Customs' stables.

There are always plenty of incredible cars to see at these events, so if you're near Fontana, California, Elkhart Lake, Wisconsin or Las Vegas, mark the remaining dates on your calendar and make plans to see them run in person. Visit www.DriveOPTIMA.com for all the details.

“Remember Chevy drivers, when you see this flag, move over for the Fords that need to pass you.”
The landscape around Barber Motorsports Park is nicer than most country clubs and filled with all kinds of interesting artwork, including a spider big enough to throw a saddle on. They race cars there too.
Cliff Elliott, John Laughlin and Jonathan Blevins (left to right) represent the first podium sweep by Mustangs in any class in the history of the series.