The Year of the Mustang? 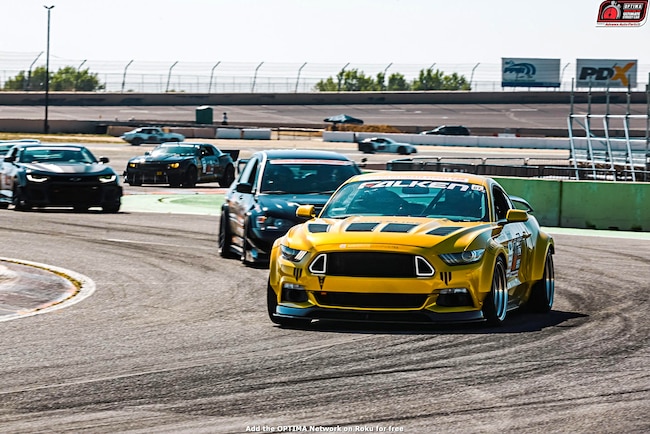 A scan of professional racing today, from NASCAR to the NHRA reveals a disconnect between the fans and the brands they cheer to win on Sunday. The cars that hit the track tend to bear little resemblance to their street side counterparts many historic rivalries have all but been abandoned. One series that hasn't suffered that fate is OPTIMA's Search for the Ultimate Street Car, presented by Advance Auto Parts.

All the cars (as well as a few trucks) are all still very much street-legal and all the major manufacturers and even a few defunct marques go head to head at every event. The Franklin Road Apparel GT Class is where the classic Ford versus Chevy rivalry is waged to a high degree at every event. As the largest class in the series, more than 70 different cars have already run in competition, with nearly 100 scheduled to hit the track before the end of the regular season.

Andy Fritts' 2017 Mustang continues to serve as a rolling test bed for Whiteline Performance, but a tire issue hampered his efforts in Colorado. Fortunately, fellow competitor, Brian Hobaugh and his father were able to help Andy repair his tire enough to score points in all segments, but Fritts didn't want to test the tire at full speed on the Falken Tire Road Course Time Trial and risk further damage, resulting in a disappointing overall finish.
Bob Guido's 1969 Mustang may not have finished at the top of the standings in the QA1 GTV Class, but no one made a better trip out of the event than Bob. The direct route back to his home in Alberta is just over 1,000 miles, but Bob drove the scenic route back, racking up more than 1,700 miles in his Mustang.

Camaros have had the upper hand in recent years, thanks in large part to three-time class champion, Bryan Johnson's stranglehold on the top spot. However, Johnson has yet to make an appearance in 2018 and with the best three performances counting toward the season-long points total and only three events remaining, Johnson will literally have to travel coast to coast if he hopes to keep his crown.

In Johnson's absence, the void has largely been filled so far by Mustangs. While Camaros won the first two events, Jonathan Blevins' 800+ horsepower 2008 Shelby GT500 has captured the last two events at NCM Motorsports Park and Pike's Peak International Raceway. Blevins now sits atop the standings with a commanding lead over the Schoch brothers, who also campaign a pair of Mustangs. Several of the top Chevys have yet to run their third events of the season, but even when they do, they'll find a stiff challenge ahead of them.

Cliff Elliott's 2016 Mustang came to PPIR looking for points in the hopes of capturing an entry at the end of the season. However, Cliff ran well enough that he was the highest-finishing car in the Franklin Road Apparel GT Class, that didn't already have an invitation to Vegas, netting him an early entry into the OUSCI.
John McKissack was plagued with distributor issues all day Saturday and ended up missing the LucasOilRacing.tv Road Rally. Fortunately, fellow competitor, Bob Guido knew a guy in Colorado Springs who had a spare and McKissack was able to post four runs on the PowerStop SpeedStop Challenge and take in the last session on the Falken Tire Road Course Time Trial to pick up some valuable points.

Fords are by no means limited to the GT Class in this series though. Hot Rod Drag Week veteran, Bob Guido drove his 1969 Mustang more than 1,000 miles from Canada, just to make the event at Pike's Peak International Raceway, taking home a top-10 finish in the QA1 GTV Class. He was also joined in that class by Californian and series veteran, John McKissack, who hauled his “Riverside Spec” 1966 Fairlane out to compete. Pat Sheely also represented the blue oval in the ultra-competitive RECARO GTS Class in his 2017 Focus RS.

The series now heads down south, to Barber Motorsports Park on August 4th & 5th for the next round of competition. While that event and the event at Road America are both sold-out for competitors, spectators are always welcome and there is no admission fee. However, because all events are televised, you must consent to allow your likeness to be used on TV, so if you have outstanding warrants, wear a disguise. If you want to squeeze into one of the remaining spots at Auto Club Speedway on September 15th and 16th, head over to www.DriveOPTIMA.com to read up on the rules and get signed up.

Jonathan Blevins' GT500 carried a 9-point cushion into the timed segments from the Lingenfelter Performance Design & Engineering Challenge and Eric Sheely spent the rest of the weekend chipping away at his lead. Coming into the final day, Sheely needed four points to get the win and picked up two on the PowerStop Speed Stop Challenge. Blevins finished right behind him on the Falken Tire Road Course Time Trial though and took the class win with a tie-breaker.
This is what a real rivalry looks like - Ford vs. Chevy in cars that look like they were actually built on an assembly line.
If you want to get an invitation to the SEMA Show and the OUSCI and you don't win an invitation at an event, you need to pick up as many points as you can at your best three events. Living in Fontana, California makes Auto Club Speedway easy pickings for Nasario Birrueta's 2001 Bullitt, but Vegas is a longer haul. Pike's Peak is a 1,000+ mile journey, but he made it out, picked up his points and will set his sights on his next event at his home track.

Pat Sheely is driving a 2017 Focus RS that already has a new paint job. What looks black under most light reveals itself to have a brown metal flake when the light hits it just right.
The Detroit Speed Autocross courses at these events tend to be on the large side with this one measuring more than 3,600 feet, utilizing a portion of the infield road course. Only two drivers in the Franklin Road Apparel GT Class could manage a time faster than 57 seconds and Paul Molina's 2017 Mustang was one of them. He was the only driver to post a sub-56 second run and did it three times, outrunning second place in class by nearly a full second!
Ron Schoch and his brother Tim only signed up for three qualifying events this season, hoping they'd pick up enough points for invitations to Vegas. PPIR was their third event and both ended up eclipsing 1,100 points on the season. Now they'll play the waiting game to see if their scores hold up over