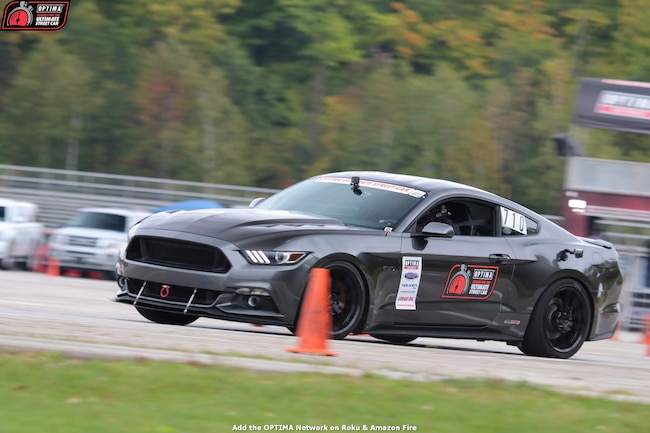 Road America in Elkhart Lake, Wisconsin, was the seventh and final stop in the regular season of OPTIMA's 2017 Search for the Ultimate Street Car Series. While the series has run at Road America in each of the prior three seasons, 2017 marked the first time the series ran the full course. That included the motorcycle chicane, which helps reduce speed heading into “The Kink,” which has claimed quite a few cars over the years. Even with that precaution, Road America's 4.048-mile circuit is still one of the fastest and most-demanding road courses in the country.

That presented a unique challenge for several competitors, who were looking to qualify for the 2017 OPTIMA Ultimate Street Car Invitational (OUSCI) and saw this track as their last chance to do so. While some, like Mike Gallagher's 2016 Ford Focus RS, were confident they'd make the cut, others, like the Mustang of Vernon Jolley had plenty of work to do in Elkhart Lake. Do you push the limits on an unforgiving track, especially on your first visit?

Jolley started off strong, posting a top-20 overall finish in the Detroit Speed Autocross and a top-30 overall finish in the Lingenfelter Design & Engineering Challenge. Sunday brought new challenges in the PowerStop Speed Stop Challenge and the Falken Tire Road Course Time Trial on the big track. Jolley didn't run as well in those segments and perhaps held back on the road course, but by the end of the weekend, he had run well enough to earn an invitation to the 2017 SEMA Show and OUSCI.

Many others fell short of their goals at Road America, but that was inevitable in a series this competitive and at a track so demanding. Mike Maier's 2017 Mustang continued to make progress toward his goal of toppling three-time Franklin Road Apparel GT Class Champion, Bryan Johnson. Maier's Mustang edged out Ken Thwaits' Camaro by a single point for the class win, but it came at great expense, as Maier's engine let go near the end of the weekend.

There weren't many competitors in the series who overcame more adversity in 2017 than Cliff Elliott. While all the regulars encounter issues with their cars from time to time, Cliff endured multiple issues with tow vehicles and an encounter with Hurricane Harvey! Elliott persevered and captured second place in the season-long points chase in the Franklin Road Apparel GT Class.

Further down the GT standings in fifth place was Cliff Elliott's 2016 Mustang GT, just four points shy of a podium finish. It wasn't exactly the results Elliott was hoping for, but given the challenges dealt to his family by Hurricane Harvey, Cliff felt fortunate to be back on the track and enjoying his car. He solidified his runner-up position in the season-long points chase and locked in his invitation to Las Vegas.

Mike Maier's 2017 Mustang carried the Blue Oval flag further and faster than anyone else at Road America, topping out the Franklin Road Apparel GT Class and finishing third in the season-long points chase.

While not the fastest competitor in the series, David Griffin's 2006 Mustang may be one of the most consistent. He followed up a 269-point performance earlier this season at NCM Motorsports Park with a 270-point performance at Road America.
Jim Crews brought a beautiful 1960s knife to a modern-day shootout when he ran at Road America. Because his 1967 Mustang weighed in at less than the 3,200-pound cut-off for GTV, Crews ran in the lightweight class, where his Mustang was the only non-Corvette and the oldest car in the class by 34 years.
Logan Kepler may be the first third-generation competitor in series history, as his father Steve, runs a Nissan GT-R and his grandfather, Fred, has run a Corvette. Road America marked the youngest Kepler's rookie outing and his future looks promising. He already has a win over his uncle Mike's Corvette to his credit.
The RECARO GTS Class proved to be one of the most-competitive classes in the series and Mike Gallagher's 2016 Focus RS was the top-finishing Ford. Gallagher edged out Danny King's turbo Porsche by seven points in the final standings for eighth place overall.
Saroja Raman is a multi-talented driver. In addition to hanging with the big boys on the track, she makes the big boys even bigger off the track, by baking some of the most-delicious track shaped cookies you've ever eaten!
Three of the four top spots in the Franklin Road GT Class points championship went to Mustangs, but none of them belonged to Vernon Jolley. That didn't matter to Jolley, because his goal was punching his ticket to the 2017 SEMA Show and OPTIMA Ultimate Street Car Invitational. When the checkered flag flew at Road America, that's exactly what he did.