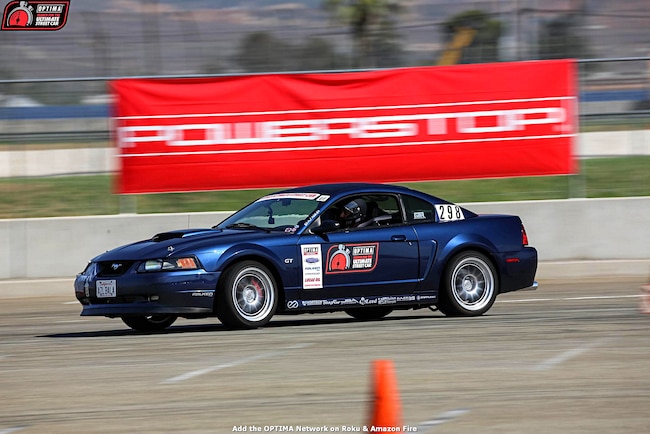 When you have “Street Car” in the name of your series, you need to live up to that claim. OPTIMA's Search for the Ultimate Street Car Series has done that, running with both rain and the threat of snow at their events, but the heat they experienced at Auto Club Speedway was something competitors had not previously encountered. Since most of the events are run in the warmer months, 80 and even 90+ degree temperatures were not unfamiliar. However, when competitors arrived in Fontana, California, it was 114 degrees with little relief over the next several days. Everyone knew both cars and drivers would be put to the test.

Series sponsor Lucas Oil proactively offered their Super Coolant product to any competitors who were interested and everyone buckled in for what turned out to be the hottest weekend in series history. Relief from the heat never came, ironically enough, until after the final track session went cold on Sunday afternoon and the skies opened up. Amazingly, only one competitor in the sold out field said the heat was too much and packed it in early.

Nine Mustangs competed in the Franklin Road Apparel GT Class for late-model musclecars, but it was a Camaro that came out on top. Andrew Fritts did represent the blue oval well, grabbing an invitation to the OPTIMA Ultimate Street Car Invitational (OUSCI) in the GTC class for compact cars, in his 2012 Ford Focus.

It's always great to see folks who work in the automotive aftermarket, who actually get behind the wheel and see how their own products perform. Andrew Fritts works at Anderson Composites and in his first event ever, he managed to grab an invitation to the OUSCI in his 2012 Ford Focus.

Only one qualifying event remains now at Road America on October 7 and 8 and there is still a lot in play in terms of competitors earning invitations to the SEMA Show and competing in the OUSCI. The top-three competitors in each class, who have not yet earned invitations to Las Vegas by the end of the season will be invited, based on their point totals.

Right now, Cliff Elliott's 2016 Mustang is at the front of the line in the GT Class, but he's taking no chances. Elliott is second in points, but he cannot catch Bryan Johnson's Camaro for the championship in the final event. He will be at Road America to try and improve his position in the standings and perhaps even win his way into a Vegas invitation.

In addition to three invitations from each class, an additional ten competitors will be invited, based on their season-long point totals, regardless of class. Mike Gallagher's 2016 Focus RS heads that list, but he's also leaving nothing to chance and will make a run at one of the three transfer spots from the Recaro GTS Class at Road America. Vernon Jolley's 2013 Mustang is on far less solid ground, currently sitting on the wrong side of the points bubble heading into Road America. The good news is, a strong performance by Jolley in Elkhart Lake can punch his ticket for a trip out West.

Dane Gonzalez improved on his earlier performance this season, finishing second in the Franklin Road Apparel GT Class. Although he came up just short of qualifying for the OUSCI this year, he looks to be on the verge of making it in 2018.
Ed Moss 1967 Mustang competed in the OUSCI and would be at home on any show car circuit, but he enjoys flogging it like a rental. Moss' company, TCI Engineering also sponsors the First-Timer award, refunding the entry fee for the top rookie finisher at each event in the series.
Jeremiah Stotler was able to swoop in and grab an OUSCI invite at Auto Club Speedway last year in his lone appearance in the qualifying series. Unfortunately, he wasn't able to replicate that performance in either of the two events he ran this season.
Jonathan Bradford of Falken Tires is another series sponsor, who also enjoys mixing it up on the track. When he's not busy wheeling his 2001 Mustang, Bradford is handing out $500 checks to class winners, who run Falken tires.
Kurt Burris' 2015 Mustang had an impressive debut in the series. Burris finished third in the Falken Tire Road Course Time Trial, pushing him into a fifth-place finish in the Franklin Road Apparel GT Class.
Each event includes a rally segment on public roads, to make sure all these cars are street legal and can handle the potholes, speed bumps and traffic jams as well as cones and chicanes. The Lucas Oil Road Rally at this event ended at MAVTV's world headquarters in Corona, where competitors were treated to a pizza party hosted by FireAde.
The Focus RS continues to be a popular and potent platform in the Recaro GTS Class. Wes Drelleshak posted the fifth fastest time of the weekend on the Detroit Speed Autocross, helping him to a seventh place finish in his class.
Michael Doscher's 2015 Mustang was the top rookie performer in the Franklin Road Apparel GT Class, finishing third, helping Fords take two of the three spots on the podium.
Ricardo Topete's 2001 Mustang underscores how tight the competition in the Franklin Road Apparel GT Class has become. Each position on the track is worth one point and while Topete finished ninth in his class, eighth place was just one point ahead of him and a top-five finish was just 12 points away.