On June 13-17, 2018, Tulsa, Oklahoma was overrun with Shelbys and other Fords for the annual Mid-America Nationals 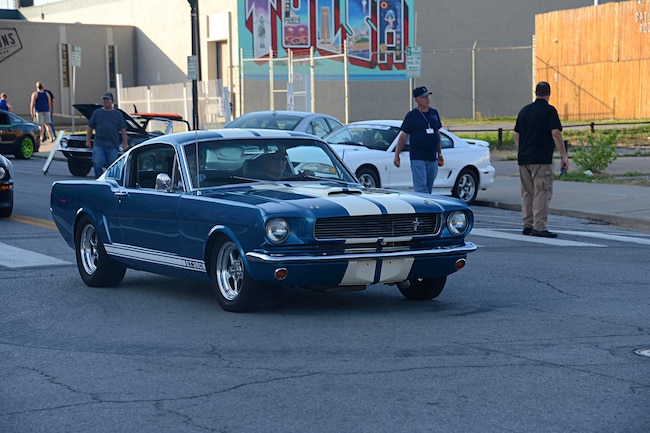 Four big days of action, and a Wednesday the 13th for early arrivers to register at 5 pm, outlined the latest Mid-America 44 in Tulsa, Oklahoma, June 13-17.

The first full day was Thursday, June 14th with an Open Track session at Hallett Motor Racing Circuit, sponsored by Gateway Classic Mustang. Jason and Lonnie Childress were there in their racing suits and with a full crew, their big tractor-trailer rig dispensing copious quantities of cars, products, and displays; and the same could be said for Ford Motor Company and Shelby-American.

This is the Ford & Shelby Nationals. Randy Roberts, one of the organizers, capsulized Tulsa when he said, “We are a user event. That’s what I’ve always told people. We use our cars at everything we do.”

On the last day of the event, Roberts formulated a statement that rang so true for participants with aching muscles, more or less sleep deprivation, hydration issues, sunburn, et al, when he stated in his Oklahoma accent, “We only sit still Sunday because we’re too tired.”

We arrived at the host hotel, the Southern Hills Marriott in Tulsa, late in the afternoon Thursday, and while boarding the elevator heard a trio of sunbaked road racers with dirt caked around their eyes say, “You should have been on the track today, Man, it was hot out there.” Track rules dictate drivers wear long pants and full sleeves, which requires strong wills and big bottles of water in 96-degree heat. These drivers were hot and tired, but they a displayed an air of accomplishment and yes they would recover and return to the track Friday.

We don’t know if this trio made the Thursday night cruise, which is where we were headed. “Cruisin’ Tulsa” requires the least sweat equity of the whole event. One simply drives downtown and parks their pony, or another Ford-powered vehicle. People can walk into the shops and get a cool drink and food. Music fills the air, but those that party too late might sacrifice sleep to drive those 40 miles west to Hallett early the next day in Jennings, Oklahoma.

Racers compete in three classes per driving skill: beginner; intermediate; and experienced. Of course, Shelby-American is there giving rides, courtesy of Gary Patterson, as is Ford Motor Company utilizing of veteran racers Ed Hockaday and Steven McCarley, and the die-hard Gateway Childress crew with Lonnie and Jason, who seem to always be smiling and energetic.

The big deal Friday was a pair of exhibition races, one for late models and one for vintage cars. Most of the entrants’ drive Mustangs, but anything Ford powered is eligible, although a non-Mustang is a rarity on the track. After two grueling days in the summer sun at Hallett, the schedule did not let up. Friday night was the big banquet with literally hundreds of door prizes, followed by Saturday action at Tulsa Raceway Park for quarter-mile bracket racing.

The event wrapped up in Tulsa with the “Super Show,” an appropriate name because even this event requires a lot of elbow grease. We don’t know of another such Ford event in the nation with so much hot action. Roberts sure was right when he said, “We are a user event.”