Mustangs & More Battle Top Street Cars From Around the Country 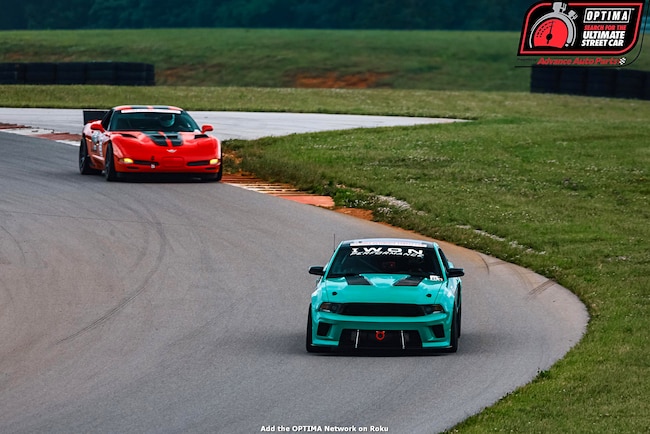 OPTIMA's 2018 Search for the Ultimate Street Car, presented by Advance Auto Parts, visits eight different tracks around the country, seeking to invite the very best to the SEMA Show in Las Vegas and the OPTIMA Ultimate Street Car Invitational (OUSCI) that follows. While Bowling Green Kentucky and NCM Motorsports Park might be more closely associated with cars wearing a Bow Tie emblem, Fords made a strong showing in this mid-South showdown.

Cars competed in six different classes, but Mustangs made up nearly half of the 22-car field in the Franklin Road Apparel GT Class. NCM is the home track of three-time and defending class champion, Bryan Johnson, but he wasn't able to get his car running in time for the event, leaving the door wide open for someone else to emerge with a class victory, invitation to the 2018 SEMA Show, entry into the OUSCI and potentially a lead in the regular season points chase.

Charlie Rogers returned to NCM Motorsports Park for his second event in the series, but the first time running the 3.15-mile Full Grand Course in the Falken Road Course Time Trial. The longer layout includes a straightaway nearly double the length of a dragstrip and some very treacherous turns and significant elevation changes.

Suspects began to emerge. The Schoch brothers (and daughter Allison) are no strangers to the series and always stout competitors and John Laughlin's second appearance in the series included a crossover from the dark side and into a 2016 Mustang, but it was Jonathan Blevins' GT500 that ended up covering the field on this weekend. Blevins finished fourth in the 2017 points chase and started out the 2018 season with a runner-up finish at NOLA Motorsports Park that surpassed his best point total of the entire 2017 season.

Looking to build on that momentum at NOLA, Blevins Cobra won the Lingenfelter Performance Design & Engineering Challenge and finished in the top-20 overall (fourth in class) in the Detroit Speed Autocross opening up a sizable lead after day one. The Schoch brothers, Laughlin and Jason Chinn were all bunched up together, but trailing by at least 13 points. Two events remained on Sunday, which left plenty of opportunities for a shuffle in the standings.

Competing in this series is a family affair for the Schochs, as Allison and her dad both competed in this 2016 Mustang, while uncle Tim ran his 2011 Mustang.

On Sunday, only the Camaros of Clay Shearer and Chinn finished ahead of Blevins on the PowerStop Speed Stop Challenge, but no one could keep pace with Jonathan on the Falken Tire Road Course Time Trial. Blevins finished first in class and seventh overall in that segment, giving him a 19-point win over second-place Jason Chinn and elevating him into first place in the season-long points chase. Jonathan's 452-point outburst was also a personal best and just the kind of point total that is going to put all kinds of pressure on anyone looking to pass him for the regular season championship.

Meanwhile, in the RECARO GTS Class, Mike Gallagher's 2016 Focus RS is once again putting together a very solid season in a class littered with high-horsepower Corvettes, Vipers and GT-Rs. Gallagher finished third in the 15-car field, moving him into fourth place in the season-long standings and in excellent position to secure a third trip to Las Vegas at his next event.

Many of the vintage Fords that compete in the series are West coast-based or under construction, which left series rookie, Robert Britton's 1965 Mustang fastback as the lone representative in the QA1 GTV Class on the weekend. The next event at Pike's Peak International Raceway is flush with vintage Ford entries, including TV personality, Jeff Allen's Coyote-powered 1963 Falcon. If these events come to your area, you should definitely take a day to check them out, as there is free admission for spectators. If you're interested in entering your car, head over to www.DriveOPTIMA.com to learn more about the series and what it takes to run with the world's best all-around street cars.

Ben Dozeman's 2015 Mustang finished second in class in the Lingenfelter Design & Engineering Challenge, helping elevate him into a top ten finish on the weekend.
NCM Motorsports Park has a strict 103 dB sound restriction, which forced some competitors to make changes and others to avoid the track entirely. David Griffin's 2006 Mustang came close to a violation, but kept it under the limit all weekend