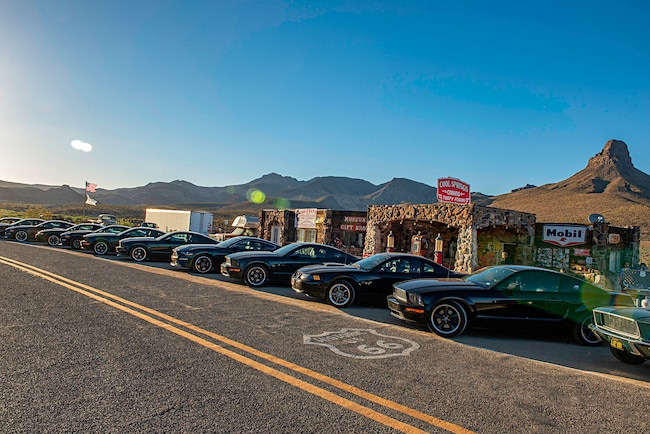 When we left off with part 1 of our Legend Lives II Tour, we were calling it a night just outside of Oklahoma City. According to the Nat King Cole song, “Get Your Kicks on Route 66,” that left about two-thirds of the adventure still ahead.

This tour was created by HoonDog Performance Group to celebrate the 50th anniversary of the movie, Bullitt. It was open to any Mustang, but the majority of the cars that made the drive all they way from Illinois to California along Route 66 were 2001 or 2005 Mustang Bullitt models in addition to a couple of 1968 tribute cars. Ford Motor Company even joined the drive with two pre-production 2019 Mustang Bullitt models, which will be available in the summer of 2018.

Which are the best locations along Route 66 is debatable, but there’s no doubt that the most untouched sections of the road lie west of Oklahoma. As we departed the state, we entered into wide-open sections of the Mother Road.

Our first big stop on this leg was Conoco Tower Station in Shamrock, Texas. This station epitomizes the art deco design that you’ll find from this point through California. It ahs been beautifully restored and provides visitors a glimpse into what a combination fuel stop, garage, and diner would have looked like.

Next up was Cadillac Ranch. If you’re remembering images of somewhat complete Cadillac cars stuck nose first in a farmer’s field, it’s time to update your memory. What’s left of the cars have now become a graffiti destination. Tourists leave there personal mark on the cars. The positive is that with 2-3 inches of spray paint on the cars, rust will not be an issue.

Then it was on to the Mid Point Café in Adrian, Texas. As the name implies, this is the official half-way point along Route 66. The café serves hamburgers along with great pie. If you have time to spare, this a great place to stay for an hour or so and listen to stories from the owner as well as people you meet who stop in for a bite. There’s nothing else around for miles, so pretty much anyone traveling Route 66 will stop here.

The Blue Swallow Motel in Tucumcari, New Mexico was the destination for that day. Tucumcari is the town along Route 66 best known for its neon. While much of the town is still in need of restoration, the Blue Swallow is picture perfect. The rooms are small but decorated with flair from the 1940s and 1950s, including functioning rotary dial phones.

The rest of the trip read a lot like Nat King Cole’s song, “…Gallup, New Mexico, Flagstaff, Arizona. Don’t forget Winona, Kingman, Barstow, and San Bernardino.” Highlights included crossing the Continental Divide, Standing on the Corner in Winslow, Arizona, Siligman, Arizona, and one of our favorites—the stretch from Cool Springs Station over the mountain and into Oatman, Arizona. Not only are you far off the beaten path, the narrow, windy road over the mountain is a blast to drive.

The descent into San Bernadino, California, is a fitting closing for this Route 66 tour. After spending the last three days in mostly sparse desert areas steeped in the Americana history of the road, the trip down El Cajon Pass brings you back into the modern day with multi-lanes of traffic and an endless sea of buildings. Although very well restored and iconic outposts, the Wigwam Motel and Rancho Cucamonga Service Station are islands in this area of convenience stores, fast-food restaurants, industrial buildings, and houses.

The next day of the Legend Lives II Tour was a free day which many used to drive to the Santa Monica Pier—the official end of Route 66—for a feeling of completing the journey. The last day of the tour, the group participated in the Steve McQueen car show at the Boys Republic school in Chino Hills, California, where the HoonDog Performance Group was awarded the King of Cool award.

We can neither confirm nor deny that part of this group may continue to San Francisco to drive over the streets that the original Bullitt Mustang was chased by a Dodge Charger in the movie.

In Part 1 of this story, we included some of our favorite stops along the first third of the trip. Here is the rest of the list:

Standing on the Corner
Winslow, AZ 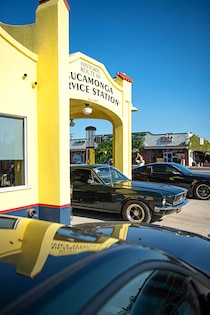 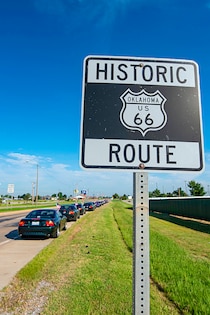