Cashing in on the Competition 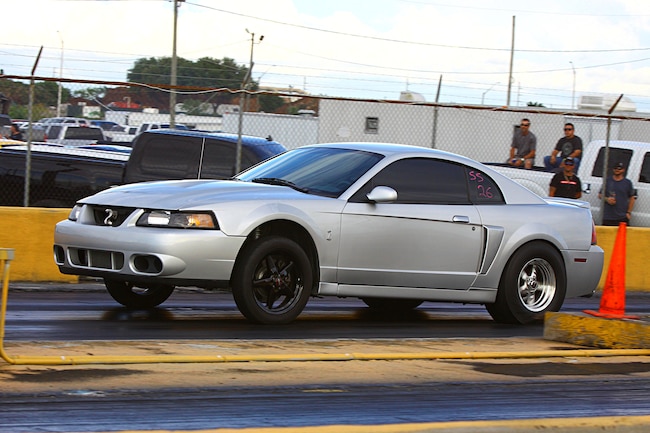 Stick shift racing is big in the southeast, and it shows signs of getting even bigger. With stick shift classes popping up all over the place, and getting top billing at many tracks, more and more people are building stick cars. Frankly, rowing your own gears is way more fun (And at times, more challenging) than letting the transmission do the work. Not to minimize building a fast automatic, because there are challenges to both, but finding a clutch and transmission to handle a ton of horsepower is tough.

When it comes to stick shift racing, there seems to be two lines of thought. The first is simply to make a ton of horsepower, and let ‘er eat. The other is to build the lightest Fox possible, and hope you can stay out front long enough to take the win. With any Ford, making power isn’t the problem. It’s just that with a stick car, you’re asking a lot of the drivetrain to live under the harsh conditions of side-stepping a clutch at high-RPM. However, clutch and transmission technology is helping the stick shift community get what they want.

At the latest Stick Shift Mafia Cash Days, which took place at Showtime Dragstrip on June 15, stick racers put it all on the line, and then some, in the Competitive Edge Racing Cylinder Heads & Engines Stick Shift Shootout. Born on the streets of central Florida, and organized by David and Tiffany Hill, Stick Shift Mafia races don’t have your typical qualifying passes to establish a ladder. Racers get a few test-n-tune passes, then its line-em-up-and-race. After test-n-tune, racers pick out the matchups via a hat, and the race is on. After each round, the process starts all over again for the next round of matchups.

After having a few Stick Shift Mafia events under his radials, Yandro Ulloa was able to get his first event win Cash Days 18.3, and Bubba Crotts went to his second final round of the year. Attrition played a big part at Cash Days 18.3, but racers will have another chance to get a win at Cash Days 18.4, scheduled for August 18, 2018 at Showtime Dragstrip. After attending 18.3, count us in at 18.4.

A recent dominant force in stick shift racing, Yandro Ulloa’s Minion 1998 Cobra is largely accepted as the quickest stick car with an 8.47 at 169 mph. Yandro’s Cobra utilizes a Levin Motorsports-built twin-turbocharged Four-Valve tuned via an AEM Infinity engine management system. HRF Performance in Clearwater, Florida dials in the car’s suspension, while Yandro rows the fully-synchronized gears of an RPM Transmissions-built Tremec T56 Magnum. Aerospace Components brakes brings the Minion to a stop, but in the Stick Shift class at Cash Days 18.3, those brakes were the only thing stopping Yandro. He did also enter the Pro Fab Performance Extreme Street class, but Bob Stuller’s Ford-powered Jeepenstein ended his night in that class. Yandro went through the Stick Shift class and met Bubba Crotts in the final. In true no-prep style format, the times weren’t displayed so we don’t know the details. All we know is Yandro’s win light illuminated to signal he had won the race.

Bubba Crotts has been successful in stick racing in his own right. Getting to the finals at Cash Days 18.3 was his second appearance in the final round this year, and he also has a victory under his belt in 2018 at another stick shift race. Bubba’s Lil Hulk 1992 LX coupe boasts a Ford Performance 408 with AFR Renegade 205 heads, a custom Comp cam, Edlebrock Victor Jr. intake, Holley 950HP carburetor, Kooks headers, Dynomax Race Bullet mufflers, and a Nitrous Express nitrous kit. Bubba also runs a Tremec T56 Magnum transmission, along with Strange Engineering 33-spline axles and spool. Lil Hulk grew up on the streets, and loves regular trips to Mexico, but as we saw at Cash Days 18.3, the car loves no-prep style racing, as well.

Seemingly outgunned, but not scared of a little competition, Byron Oakley brought his naturally aspirated 331-motivated LX coupe to Cash Days 18.3. According to Stick Shift Mafia-ambassador Waylon Crotts (who hopes to be out at the next event with his own Fox coupe), Byron’s combination has over 300 passes on it, and we hope us mentioning this fact doesn’t bring that streak to a halt. We hope Byron gets plenty more passes out of the car’s 331 with AFR 185 heads, Trick Flow Stage 3 cam, Edelbrock Victor Jr intake, and Demon 650 carburetor. Byron rows a G-Force faceplated T5, and a built 8.8 rear with Strange Engineering 31-spline axles. Byron’s coupe is the only other car in which we know what it runs, but we’ll keep that in our pocket.