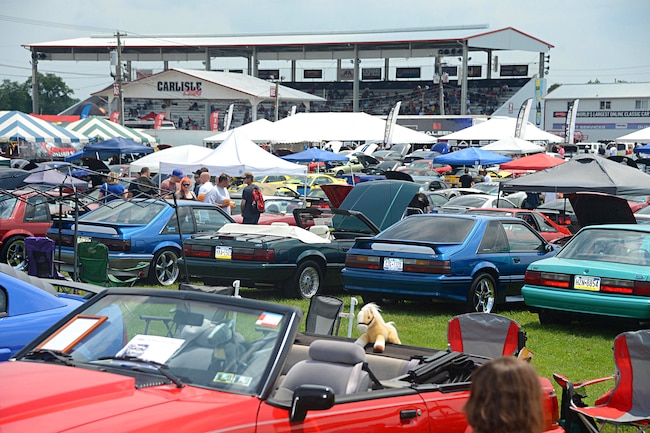 Sponsored by Meguiar’s, the show field at the 2018 Carlisle Ford Nationals was jam-packed with Fords of all kinds, and a big chunk of the participants wheeled their 1994 to 2018 Mustangs onto the grounds and took their spots in the designated sections for each model year and/or special make.

Walking into the show from the main gate, it was all early Mustangs to the left, late-models to the right, and everything else from Ford Motor Company beyond that and over the hill. There were special displays for Saleen Mustangs, and Steve Saleen himself was even on grounds singing posters and showing off his new 2018 Saleen Mustang packages. Likewise, Shelby American had a big presence with their new Wide Body Super Snake and a 1967 G.T. 500 “recreation” car that you can buy new.

This year was also the 50th anniversary of the Bullitt movie and legendary ’68 fastback that Steve McQueen drove in that movie (which has recently been found, but you probably already know that), so there was a dedicated area both inside Building T and outside under a tent for the various years of Bullitt Mustangs, but we’ll bring you a small gallery of those later in the week. Of course, Ford Performance had a big presence, with their big rig full of toys and the Ford Performance Garage where participants could have Ford parts bolted onto the car, right on the show grounds. They even had a $2,500 contest for one lucky winner to choose anything he wants (up to $2,500 of course) from the Ford Performance catalog. That’ll make your weekend!

Like we said in previous Carlisle stories, this is one you should see if you call yourself a fan of Ford. Literally everything that Ford has built in the last 80 years is on grounds (and a few before then too, including a huge display of old Ford tractors). As a single model, Mustangs dominated the show, of course, and the late-models may have had the biggest number on their side of the field. So make plans to check it out next year for the weekend of May 31-June 2, 2019. That gives you plenty of time to get the vacation days and get the Mustang ready to show off to the world!