Season Five Heats up in Vegas 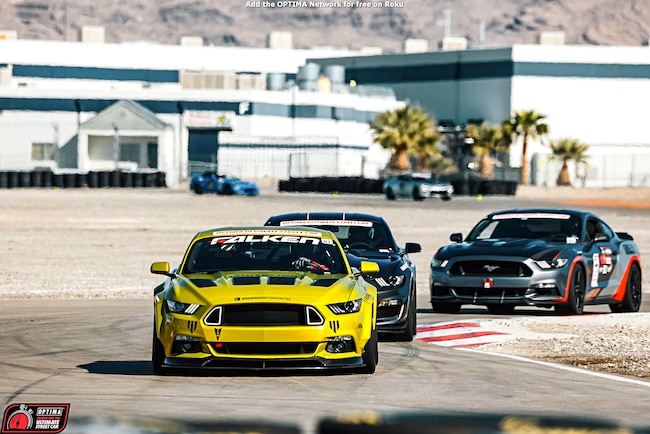 From beginning to end, OPTIMA Batteries' annual search for the ultimate street car takes about eight months. The qualifying series saw it's first stop in mid-March at Las Vegas Motor Speedway and will visit tracks in six other states before returning to LVMS in early-November for the 11th annual OPTIMA Ultimate Street Car Invitational (OUSCI). Most of these events sell out to competitors months in advance and the vehicles that show up aren't just track-capable street cars, but some of the very nicest examples to be found anywhere.

The series divides cars and trucks into six different classes, based on combinations of age, weight and drivetrain. There's even a class for EVs, so if you have a Focus Electric, bring it out and have some fun! Each class awards an invitation to the SEMA Show and OUSCI at each event and the QA1 GTV Class features pre-1990 cars and trucks that weigh over 3,200 pounds. While many think of early Pro Touring Fastbacks in this class, the 1989 cutoff allows most of the Fox-body generation to run with the older generations. Two showed up at Vegas in Curt Croshaw's 1986 Mustang and Joe Ayad's 1987 Mustang. Both made their rookie debuts and could return later in the season at Auto Club Speedway.

This series is all about promoting the automotive aftermarket and the companies that make cars look cooler and go faster. Andy Fritts is a great example of someone who doesn't just work in the industry, but lives it. His 2017 Mustang is a rolling test bed for Whiteline performance parts and saw it's first action on the track at this event with more to come in 2018.
Curt Croshaw showed plenty of four-eyed pride in Las Vegas, running his 1986 Mustang in the QA1 GTV Class.
The PowerStop Brakes Speed Stop Challenge is one of the unique aspects of this event, testing both grip off the line and braking in a run that typically lasts around 15 seconds.

The top Ford in the vintage class in Vegas ended up being Matt Alcala's '65 Fastback, which is one of several different vehicles Alcala has run in the series over the years. Alcala's experience was evident, as the car was well-prepped for the Lingenfelter Design & Engineering Challenge, finishing 11th out of 79 entries, helping him capture a top ten finish in his class.

The Recaro GTS Class covers late-model two-seat coupes and all-wheel drive sedans over 3,200 pounds, which means lots of Vettes, Vipers and GT-Rs, but it's also become popular with Focus RS owners. Five competed in the series last season and Wes Drelleshak returned to Vegas in his 2016 Focus RS, finishing 11th out of 18 entries. Drelleshak has run a variety of vehicles in the series and is scheduled for two more events in 2018, so we'll see if he sticks with the RS or hops into a different ride later in the year.

Jonathon Bradford believes the best way to understand your customer is to be one. As the Motorsports Marketing & Events Manager for Falken Tires, there's no better way for him to figure out if an event is worth sponsoring, than to run his 2001 Mustang in it.
Jonathan Blevins finished fourth in the Franklin Road Apparel GT Class in 2017 in his 2008 Mustang, but he has a new ride for the 2018 season in this 2015 Mustang. Even with his prior experience, getting a new ride up to speed in the series takes time and his eighth-place finish is a good starting point.
This series isn't all about what goes down on the race track. Part of the schedule on every weekend is allocated to a cruise on public roads in the Lucas Oil Road Rally. This keeps the track rats out, especially if the route includes getting stuck in a traffic jam in Las Vegas heat.

The Franklin Road Apparel GT Class is where most of the Fords reside and 16 of the 24 cars running in that class were some variation of Mustangs. Mike Maier's 2017 GT was the class of the herd, posting top 25 overall finishes in all the timed segments en route to a runner-up finish in the class.

Nearly 300 different cars and trucks are set to run in the series during the 2018 season and a few spots still remain at NOLA Motorsports Park and Auto Club Speedway later in the season. If you're interested in competing or just spectating for free, check out www.DriveOPTIMA.com for more information.

Matt Alcala's widebody 1965 Fastback features a 5.0 Aluminator XS powerplant and suspension enhancements from Mike Maier and Detroit Speed; all of which was assembled by the crew at Best of Show Coachworks.
If he had registered for more events on the 2018 schedule, Mike Maier's 2017 Mustang GT might be the great hope to win the Franklin Road Apparel GT Class. Unfortunately, his runner-up finish at LVMS is his only date on the schedule...for now.
Anyone who runs a Focus RS in the RECARO GTS Class relishes their role as an underdog and giant-killer. Wes Drelleshak killed plenty of giants in Vegas, toppling ZO6s, ZR1s and Vipers on his way to an 11th-place finish.
Paul Molina captured the Total Cost Involved First-timer award as the highest-finishing rookie in the event in his 2017 GT350R. Molina's fifth-place finish in the Franklin Road Apparel GT Class netted him a full refund on his entry fee.