In town for business, we hit one of the largest C&C events in the nation to check out the Mustangs and Ford powered cars 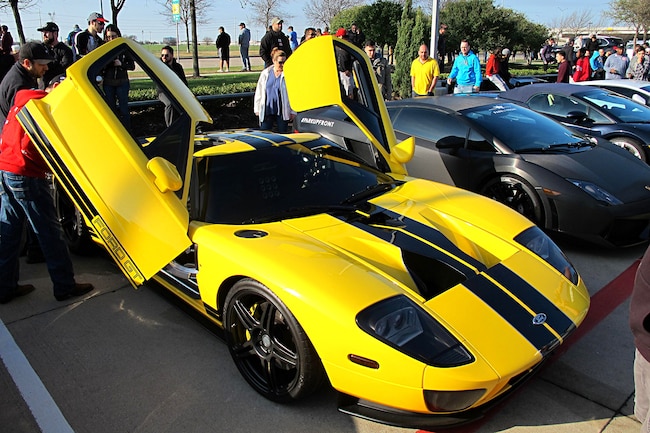 Recently we spent two weeks in Texas producing some upcoming content for our next Week to Wicked build and had a weekend free between business workdays. So, we put the word out to our friends on Facebook we were looking for car stuff to do on the weekend. As our luck would have it we were in town on the first Saturday of the month and we were told we should check out the Dallas Cars & Coffee event held at Classic BMW in Plano, Texas. Apparently it is one of the largest Cars & Coffee events in the U.S. and brings in all manner of exotics and plenty of modern and classic muscle. We got up early (though apparently not early enough), grabbed the keys to our tin can rental car and drove the hour to Plano to check things out.

We arrived about 8:00 a.m. but it was plain to see that some of the early birds were already departing. So we may have missed out on a few Mustangs, but there were still plenty of great Mustangs and Ford-powered rides to check out on this particular Saturday (March 3, 2018). In the exotics section there was but one Ford GT in attendance, but there was a huge crowd around it none the less. Amongst all the Ferrraris, Lamborghinis, and McLarens, the Ford GT was certainly getting noticed, and rumor has it that Aaron Shelby (Carroll’s grandson) often hits this Cars & Coffee with his new Liquid Blue Ford GT as well. Enjoy the photo gallery!