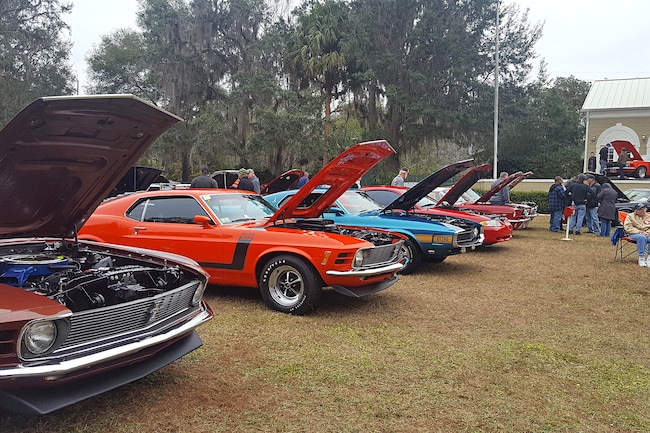 Like most human beings on this big blue marble, we loath change. From our daily routine to our favorite TV shows to the most anticipated Mustang and Ford events of the year. Change brings out the fear in all of us. I have to get up earlier now to get to work on time? My favorite show is moving to Thursday nights and conflicts with another show I watch? My “kick off” Mustang event is not returning next year and this is the last one? Yep, we hate change! So when we heard shortly after 2017’s Silver Springs Ford & Mustang Roundup that the event would be holding a final show in 2018 we knew we had to be there, even if it meant a knot in our stomach as we said goodbye to all of the attendees we’ve met over the years that kept coming back year after year.

Since its inception by local Mustang clubs we’ve attended every single event. Early on it was as an attendee in our Fox Mustang, for a few years we even tag-teamed it with the wife, bringing her Explorer Sport Trac. After the first few years National Parts Depot, based nearby in Ocala, Florida, was so impressed with the event NPD’s Rick Schmidt offered to pre-pay the first 1,000 vehicle entries and take over running the show, using staff from NPD’s Ocala location. The show became huge and was THE show to begin each year’s show season with people coming from as far away as Canada to attend each year. As the show got bigger Mustang Monthly and sister brand Muscle Mustangs & Fast Fords stepped up as sponsors. From then out we’ve been on the grounds covering the show each year, sharing project cars with a vehicle display, and handing out “Editor’s Choice” awards to our favorite rides.

Every year NPD displayed special vehicles on the main show stage (which was traditionally used for concerts at the venue). Some years it tied to an anniversary, others it was just because the cars were cool. The stage saw everything from Shelby and Saleen Mustang anniversaries to anniversaries of a specific Ford model and so on. It was a treat to see what was on display each year, many of them coming from the private NPD vehicle collection that is housed at the Ocala location.

In later years the two day show was shortened to a one day show. As much as the NPD staff tried to keep attendees in place for the Sunday awards (the show was always popular vote ballot with no formal judging, which is why it was so popular) the show’s early event date in January often meant cold and inclement weather, even for Florida. Often the show field would be less than half on Sunday of what it was on Saturday and would be quite disheartening to call out award winners and 70 percent of them had already left Saturday evening or Sunday morning for home. The one day format certainly helped come awards time, and it saved a little on budget too (one less hotel day, one less day of eating out, etc.).

In October 2013 the Silver Springs attraction, which had various owners over the years, relinquished ownership to the state of Florida. The Silver River State Park gained 231 additional acres with the acquisition of the headsprings area and surrounding land. Part of this move included Silver Springs’ famous glass bottom boat rides, an attraction in itself that had been around more than 100 years. While this was a great addition to the Florida State Parks ecosystem, it was quite possibly the end of the annual Ford & Mustang Roundup.

With but two months before the 2014 Silver Springs show Rick Schmidt and his staff at NPD pulled off the impossible and the show did indeed go on. The major changes, including the removal of various children’s rides, the Jeep safari tour, and more meant there was less for people to do, and that was one of the big draws of the old show. A family could come out and everyone had something to do and enjoy. Suffice to say, attendance dropped. At the end of the day the confluence of reduced attendance, reduced attractions for families and kids, combined with the herculean effort it took to produce and execute the show each year caused Rick Schmidt to decide “Let’s call it a day, but let’s go out with a BANG!”

Several have asked why not just move the show to the NPD grounds in Ocala, as they have a large parking area. The truth is, the parking lot, while large, is nowhere near as large as the park’s acreage, and the last thing Rick Schmidt wanted to do was turn the show into yet another parking lot show on asphalt with nothing for the family to do. That was the big attraction at Silver Springs and why NPD became involved in the show early on to support it. Does it mean the show will never come back? Never say never, but for now, we will simply have to enjoy the memories and friends we’ve made over the last 24 years. Until then!

Like the majority of the Silver Springs Roundup events in the past, things got underway Friday morning with the official Pony Trails cruise to Cedar Key. The Pony Trails leaves from NPD’s facilities and ends in the small town of Cedar Key. Here Rick Schmidt provides driving pointers and answers questions during the driver’s meeting before the group is led out of town via a police escort.

Rick led the Pony Trails to Cedar Key in his 1969 Mach 1. Riding shotgun was Rick’s longtime friend and former Mustang Monthly editor, Jeff Ford. In total there were 241 cars on the Pony Trails, which was a new record NPD’s Derek Putnam tells us, easily surpassing the previous Pony Trails best of 162 cars.

Registration has been handled by NPD staff since they took over the show. Every year they sort registrants alphabetically and register the day-of-show participants as well. You can see the variety the show pulled in this single row at the registration area.

Just past registration the vast grounds of the Silver Springs State Park allows the NPD staff to create a designated club parking area. This allows club members who arrive at different times, or pass through different registration lanes to regroup and enter the show field together for group parking. Here, the Yellow Mustang Registry is all together and about to enter the park.

The main show field is in front of the Silver Springs stage, a replica mansion that sees musical acts and more throughout the year. While the main show area is pretty much a “park them as they arrive” setup, the NPD staff do their best to group some of the Ford powered vehicles, such as Thunderbird, Cougar, Falcon, trucks, and so forth. The car count for the final show was an amazing 840 vehicles, harkening back to the earlier years of the show when the two day car count would often eclipse 1,000 vehicles.

One of the more interesting aspects of the Silver Springs Ford & Mustang Roundup over the years has been the inclusion of key product vendors to the show field. The products these vendors sell are available through the NPD catalog lines and they come out on their own dime to showcase these products and answer tech questions and even participate by providing gift certificates/awards to their favorite rides in the show.

Our good friend Courtney Barber of Team Mustang Girls drove her Mustang project for the last show. She also showed off her new Bronco project as well.

Frank Perdomo’s 1991 LX coupe was already pilfered when he became the car’s caregiver. More of a drag car when he bought it compared to its current setup, Frank turned the coupe into a NASA American Iron car using a stock 2014 Mustang GT engine under a Tiger Racing hood with a Tremec TKO-600, American Racing Headers 1 7/8-inch long-tubes, a TigVision roll cage, a Scott Rod Fabrications dash and interior panels, Wilwood brakes to set up the car for the corners, and Griffin Autocare paint. If NPD gave away a biggest wing award, Frank’s car would’ve won that hands down thanks to a RHR Performance rear wing, but the car is built to battle it out at various autocross events, driver’s education events, and potentially a trip to Mustang Week. The car may see more street action than track action in 2018, and you never know, he may take it to the drag strip, as well. The car is tuned by Lund Racing to run on pump gas and VP MS109, and makes 409 horsepower to the wheels on pump gas.

If you ever wonder what happens to various test Mustangs, this should give you a clue. Chris Figueroa picked up what he thought was just a thrashed 1996 Mustang GT. After noticing tell-tale signs of the car’s past, and having a folder full of magazine articles, he thought the car could be a Steeda Autosports Mustang test car. Turns out, he was right. In talking to Steeda reps, including Scott Boda, the car’s pedigree was confirmed. The car made the rounds in all of the Mustang magazines of the day, but it was then sold with a stock engine, and after removing the car’s striped graphic package. As you can see, Chris has restored the car to its former glory, and then some. Back in the day, it had a built engine with a Vortech T-Trim supercharger. These days, Chris is still working on such a combo, but for now it has a Two-Valve/Vortech S-Trim supercharged combination for motivation. We’re glad to see such a car revived for all of us to enjoy once again.

MM&FF Editor’s Choice
Each year at the NPD show we select an Editor’s Choice, and it’s always a tough job to choose just one car to represent Muscle Mustangs and Fast Fords. For the last Ford and Mustang Roundup, we couldn’t think of a more deserving recipient than Dean Santiago. Dean’s worked on this 1991 Mustang GT for a few years now to get it back on the road, whereas his S550 Mustang GT has been a work in progress since he bought it. The Fox GT plays host to a single turbocharged pushrod combination, whereas his S550 features a supercharged Coyote. Dean, owner of Spike’s Refinishing in Ocala, FL, is a hard worker, and not only did we reward that hard work with the Editor’s Choice, his S550 won Best Mustang 2015-Present. Great job, Dean.