Mustang Week is the vacation every Mustang enthusiast needs 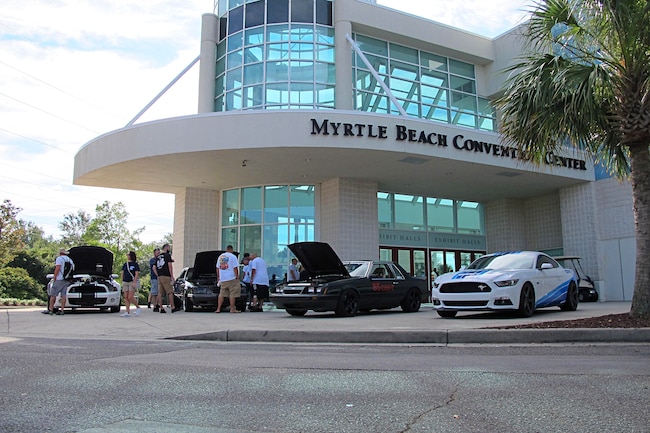 With a week full of festivities, large shows, smaller meets, and driving our Mustangs from here to there, Mustang Week, which takes place in Myrtle Beach, South Carolina, has no shortage of activities in which to partake. There’s a burnout competition like no other, drift displays, drag racing, and autocross action, as well. It’s truly an event that has something for everyone. Plus, let’s not forget about our own Battle at the Beach Pro Dyno competition.

The annual event has matured to a driving age, and just like with teenagers, turning 16 has brought a few changes. First, the dates changed from July to September in the hopes of cooler temperatures, and with the previous date, the Myrtle Beach Convention Center was always booked. Well, the new dates corresponded with the convention center being available. For the Friday and Saturday car shows, more relief from the heat was possible as Mustang Week hosted the first-ever Mustang-only trade show inside the convention center. Along with the trade show, there was a special indoor Mustang showcase on Friday and Saturday.

Tuesday’s Meet and Greet at Myrtle Beach’s Broadway at the Beach was the first opportunity for Mustang Week attendees to get an event T-shirt, and other swag. The line is this long from the start of the Meet and Greet, until the end of the show.

Mustang Week officially started Tuesday September 5th with the Meet and Greet at Broadway at the Beach, but unofficial activities started as early as Sunday the 3rd with various club and Instagram meets across Myrtle Beach. Monday the 4th is known as Beach Day, and frankly where else would you rather be than Myrtle Beach on Labor Day? Driving events took place Wednesday and Thursday at Myrtle Beach Speedway and North Myrtle Beach Drag Strip, respectively. Friday and Saturday are the two main show days before we all headed back to reality on Sunday.

Mario Pineda’s Fox coupe is always one of the nicer Mustangs at Mustang Week. For the 2017 event, he came back even stronger with a smoothed engine bay. Like many Mustang enthusiasts, Mario used Mustang Week to show the fruits of his labor.

However, the 2017 Mustang Week had a little more drama in the fact that Hurricane Irma was bearing down on Florida, and its track showed South Carolina was in jeopardy of feeling its wrath, as well. With many attendees, and members of the Mustang press, from Florida, arrangements had to be made to either leave Mustang Week early, or stay over and let the hurricane pass through before returning home. We left Friday afternoon to get home before the hurricane, and even getting out of Myrtle Beach was the popular thought at that time. Fortunately for Myrtle Beach, it was spared Irma’s wrath.

Tuesday’s Meet and Greet sets the stage for the rest of the week. The quality of Mustangs at the Meet and Greet continues for each day and at every Mustang Week venue. You see many of the same Mustangs at each venue, but when they’re as nice as this group, you don’t mind that at all.