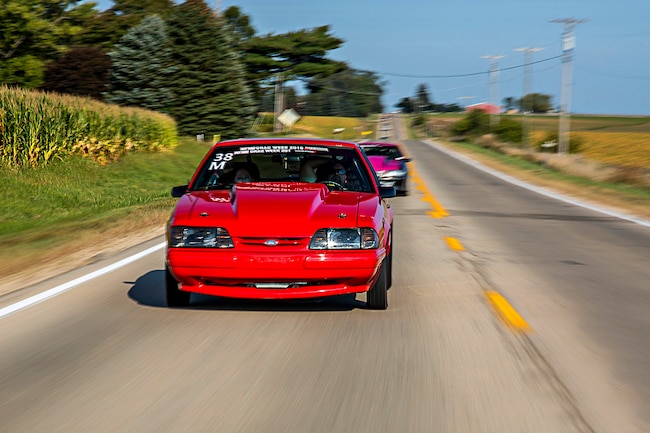 Since 2005, our sister publication Hot Rod Magazine has thrown a weeklong torture test that has been called Drag Week. It involves five dragstrips in five days and contestants travel roughly 1,000 miles as they zigzag across backcountry roads to get to the next destination. The catch is the vehicle in competition must drive under its own power the entire time on the road and make a minimum one pass on the dragstrip each day. At the conclusion of the week, the competitors’ best time from each day is used to create an average. In the 12 years of its existence, the competition has turned into a worldwide spectacle that has attracted entries from over a dozen of countries.

This year, Drag Week, presented by Gear Vendors Overdrive, began at Cordova International Dragway, which is located on the west side of Illinois. A 267-mile road tour on Monday afternoon/evening brought the field of nearly 400 vehicles south to Gateway Motorsports Park (Madison, IL). The caravan of hot rods would then go northeast to hit Byron Dragway (Byron, IL) on hump day. Hot Rod officials then sent the group further north into Wisconsin to hit the famous Great Lakes Dragway. The fifth day of competition circled back around to Cordova International Raceway, bringing the total number of road miles to roughly 1,000 miles.

Last year we rode shotgun in seven-time NMRA True Street winner Mike Jovanis’ 1,400hp 1989 Mustang LX. This year, we were back on tour with Jovanis but picked up a running mate—Alex Corella and his turbocharged 1993 Mustang LX, known as Ginger Red. The Miami-Dade firefighter brought along his girlfriend, Christina High and they narrowly escaped Hurricane Irene in order to attend Drag Week.

Corella is a sophomore competitor in the arduous street car challenge, last year finishing third in the Street Race Small Block Power Adder category with a stellar 8.6356. Though, his 2017 average improved, the level of competition rose considerably as well making his better effort score him a lower spot on the final results.

The Street Race Small Block Power Adder division, which Corella was entered in, doesn’t allow a funny car cage, so it is limited to stern 8.50 elapsed time. At the time of category’s inception, the ET market was a lofty goal and over the past few years, the division has turned into an Index race. The racers run on true stock-type suspension systems with as-measured 10.5-inch tires. Three years later and it is one of the most popular categories with 51 cars and trucks in competition and nearly a dozen of those vehicles are capable of running right on, or past, the 8.50 cap. The goal each day is to not run under 8.50, but get as close to it as possible. A simple sounding task that becomes exponentially harder when many are trying to achieve that goal in one or two runs at each stop on tour, for five straight days.

Corella did a great job staying on target and he even led the 51-car field after the first two days with an 8.5150 average thanks to an 8.512 and 8.517 during the first two stops. And while his performance fell off from there, it wasn’t due to lack of power, the car has run 8.30s at several different tracks, so it was just a matter of slowing the car down enough to run the number. Of the 12 runs in Drag Week competition, he ran under 8.50 just once with an 8.45 at 163 mph on the third day at Byron Dragway.

Corella uses an interesting combination to achieve consistent 8-second performances, his best being an 8.33 at 166 mph during NMRA True Street. The Lujan Motorsports-built coupe features a 308ci small-block that wears a set of Trick Flow Twisted Wedge cylinder heads and box manifold. Proving the grunt is a custom single turbo system with a front-mounted air-to-water intercooler system. A Bullseye 83mm turbocharger provides over 20 psi of boost while a Pro EFI engine management is tasked with controlling all of it. Errol of TPS is responsible for the engine tune-up and building the boost curve in the boost controller. Lujan Motorsports has the car setup so the Mickey Thompson ET Street R 275/60-15 drag radials can hook on any track condition.

Corella’s travelling mate was Mike Jovanis, seven-time NMRA True Street winner. We chronicled his exploits last year from Drag Week. This year, he bowed out of competition on the second day due to engine troubles.

Corella simply has to adjust the launch rpm to deliver him to consistent 1.30 sixty-foot times. That type of simplicity is what enables him to go from track-to-track and be nearly dead-on right off the street. He laughed, “I didn’t even check or change a spark plug. I didn’t even check the oil or trans fluid, either! I just put in gas and adjusted the launch rpm.” His daily routine consisted of adjusting the tire pressure to 17 psi for track use or 28 psi when he hit the streets. The rear shocks are adjusted before hitting the roadways, to compensate for the extra weight of luggage, tools, and ice cooler. A small water reservoir is mounted under the hood, which gets fresh ice for each pass down the track.

The car relies on E85 fuel for racing but thanks to a neat flex fuel sensor that Errol at TPS setup through the Pro EFI, the engine management system adjusts the tune based on ethanol percentage. For example, one day he had too much pump gas in the tank and the sensor showed the fuel had just 56-percent of E85 content. Typically, Corella sees an 80-percent reading in the data log. Regardless of the percentage, the ECU makes the necessary adjustments to keep the engine running properly. The nightly regiment consisted of either draining the tank or running it down very low, then filling up with fresh E85 for the next day’s racing activities.

Corella spent nearly 1,000 miles on the street and it was an effortless drive, with only a leaky valve stem on Thursday as the only notable issue. On the track, Corella completed the competition with an 8.5536 that put him sixth overall in the Street Race Small Block Power Adder class. His quickest run was an 8.45 at 163 mph, a number that wasn’t included in his 5-day average. The slowest pass of the week was an 8.64 at 158 mph at Byron Dragway; it was a run that he lifted early on. He logged ten more runs in competition and all of them were in the 8.50-range thanks to a slight adjustment—up or down—in launch rpm.

While some vehicles struggle to survive the harrowing road tour and barrage of dragstrip poundings, Ginger Red performed admirably. Corella and High got into a routine of getting to the track early, unloading their personal items, filling up the small ice box under the hood, adjust tire pressure, and reset the rear shocks. The routine was followed by mid-8second run and a 250-or-so mile jaunt to the next location. No drama, no breakage, and definitely no question that the red coupe was built to run quickly.

Corella completed the week with a stellar 8.5536 average, placing him sixth in the 51-car field.