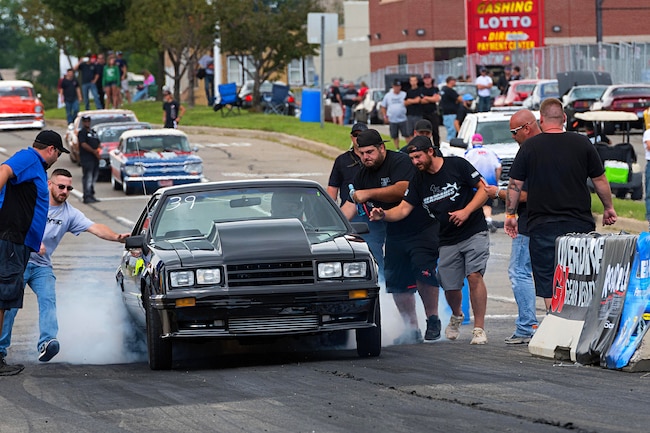 The Woodward Dream Cruise in Detroit, MI happens next Saturday, August 19, 2017, and Mustang Monthly/Mustang-360.com will be there, but to kick off the week of cruising and insanity a little early was Roadkill Nights, which brought real street racing to an eighth-mile stretch of Woodward Ave.

The Woodward Dream Cruise began life in 1995 to bring back the old days of cruising the Detroit strip, days when the factory engineers secretly raced their hot new supercars, like Cobra Jet Mustangs, Hemi Belvederes, and more under the cover of darkness. The Dream Cruise claims to attract over a million people and 50,000 cars, and once you experience it you’ll believe those numbers. Stretching from 9 Mile to 17 Mile roads, that’s an 8-mile cruising route, with events happening at points all along the way.

We’ll bring you full coverage of Woodward next weekend, but kicking it off early is this gallery of photos from the Roadkill Nights event on August 12. Roadkill is an online show and magazine owned by the same company as Mustang Monthly, and they partnered with Dodge to create Roadkill Nights last year. They stepped it up big time for 2017, by bringing in the NHRA Fuel cars of Leah Pritchett (Top Fuel) and Matt Hagan (Funny Car). And they weren’t just static show cars—each one made huge burnouts down Woodward Ave, occasionally interrupted by trains coming through the burnout box!

So check out some of the legal street racing action from Woodward and 17 Mile in Plymouth, MI, and come back next weekend and beyond for more from the Woodward Dream Cruise. Also let us know via social media (Facebook.com/MustangMonthlyMag/ and Facebook.com/mmffmag/) if you’re going to be there!

Freiburger and Finnegan raced their personal hot rods on Woodward. Freiburger has owned his Super Bee since high school, and Finnegan built the “Blasphemi” ’55 Chevy a few years ago, with a Dodge Hemi under the hood. He actually blew the Hemi up at Milan Dragway a few days before Roadkill Nights, putting a hold in the block. Freiburger’s buddy loaned them an aluminum Hemi short-block and they built it all on a picnic table at Milan in order to make it to Woodward. They made it, but the Super Bee won the matchup.
Announcer Brian Lohnes on the mic while Roadkill editor Elana Scherr looks on mockingly.