The 2017 AmericanMuscle.com car show was busting at the seams at Maple Grove Raceway

Show of Muscle: The 2017 AmericanMuscle Mustang Show was busting at the seams at Maple Grove Raceway 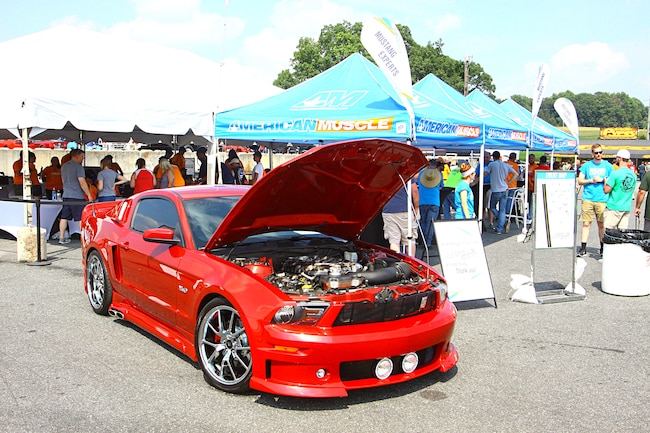 As Mustang shows go, the annual AmericanMuscle Mustang Show is one you don’t want to miss. From its first show back in 2009 at its Malvern, Pennsylvania headquarters, each year Mustang enthusiasts travel to the show like its Mecca. After a couple years at a local community college, AmericanMuscle switched up the venue to Maple Grove Raceway to bring action and excitement a parking lot just can’t provide.

Since moving it to Maple Grove Raceway, AmericanMuscle added a burnout contest, a drag racing display, and more acreage and area for everyone to enjoy. With the track’s great expanse, there’s also room for growth with future shows.

Judging by how many Mustang enthusiasts were at the show, it may not take long for the AmericanMuscle Mustang Show to fill Maple Grove Raceway. Just like every edition leading up the 2017 show, the AmericanMuscle show was another success story for the mail order giant. We can’t wait for next year.

Leo Kray and Robert Rabon are a fixture at shows along the east coast, and especially at the AmericanMuscle show. Robert built his Fox to be a Hoonigan/street car, and it was way different than any other Mustang at the show. Robert’s more known for his S197 Mustang GT, but this Fox is his new play toy. Leo’s convertible, however, is his choice for regular street action, or getting talked into doing burnouts on a regular basis.
“Would you just look at that?!” Curtis Hebert’s 1997 Mustang with a Terminator-swap hogged up its fair share of attention at the show. With a ported blower, along with pulley, intake, and exhaust upgrades, we’re sure Curtis’ Mustang is a runner, too.