Inaugural 2017 Ponies in the Smokies Hit the Ground Running

Ponies in the Smokies, Run 1: As Inaugural Events Go, PITS Hit the Ground Running in 2017 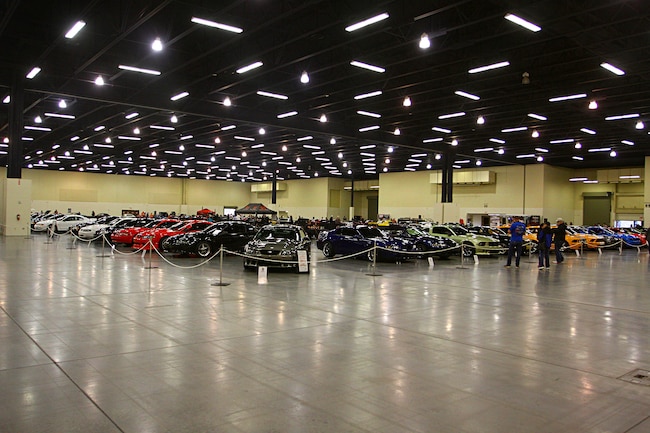 Before the advent of social media, Mustang events used to take a few years to grow. Slowly but surely, year after year, they would gain steam and attract record crowds. Now with the help of social media the results speak for themselves.

For the inaugural Ponies in the Smokies, event promoters did their due diligence by both covering the social media aspect and pounding the pavement, hitting other events to help spread the word. Then they set out to organize an event to back up the social media hype with activities designed to get people behind the wheel of their Mustang and not sitting in a chair behind it. There were times allotted for sitting in a chair, but that was for the Friday and Saturday show days—and honestly, there were too many nice cars to check out to be sitting in a chair.

For Wednesday and Thursday, attendees were too busy driving their Mustangs to sit in a chair. These two days were devoted to Mustang enthusiasts driving their cars on a shine run/poker run to various local landmarks, including the Tail of the Dragon/Deal’s Gap, Floyd Garrett’s Muscle Car Museum, and the Hard Rock Café.

Tim Townsend owns not one, but two Fox Mustangs, and both made their appearance at Ponies in the Smokies as part of the 54 years of Mustangs display. The orange coupe is an 1989 LX featuring Lamborghini Murcielago paint, the usual bolt-ons, and Shelby Razor 18x9 and 18x10 wheels. His white coupe is a 1990 LX with a 306 boasting Edelbrock heads, a Comp custom cam, long-tube headers, a 3-inch exhaust, and 3.90 gears. Townsend plans to have a built engine in the orange coupe before the 2018 Ponies in the Smokies.

In all, the shine run/poker run had six stops, but the Tail of the Dragon stop held three cards for each participant, so that was a big incentive to visit all six stops. Participants could receive up to eight cards if they made all six stops, which increased people’s chances of having a great hand at the end of the Shine Run. Of course, participants received a card for going to registration—that was an easy one. The stops on the shine run were open from 9 a.m. to 5 p.m., so that left time for evening activities.

To conclude the shine run/poker run, Thursday night held the SVTPerformance.com Shine Run Party at Quaker Steak and Lube in Pigeon Forge, where participants turned in their hands. The party also presented another opportunity to check out other Mustangs at Ponies in the Smokies.

When we go events like Ponies in the Smokies, we are obviously there to scout feature cars, too. We are always looking for something different. That’s exactly what we found in Richard Adams’ 1979 Pace Car. Just the fact that it was a Pace Car was good enough for us when it comes to a caption, but its drag look had us wanting to know more. Turns out that Adams swapped in a Vortech-supercharged Two-Valve to go along with the car’s drag race-persona. We liked it so much we chose it as our editor’s choice and photographed it for an upcoming feature.

Of course, you could also get up close to the other Mustangs at the show during Friday’s and Saturday’s shows at the Sevierville Convention Center. On both says, inside the convention center was a display of each year Mustang and Saleen. That meant 54 Mustangs inside, along with 33 Saleens represented. Awards were available for just about every Mustang derivative, including special interest models, too.

Saturday’s All Ford Cruise-In featured any Ford vehicle, not just Mustangs, and also ran from 8 a.m. to 3 p.m. The awards were handed out at 2 p.m. on Saturday. The show’s times were scheduled so that participants could head home at a decent hour, or enjoy another night in the Smoky Mountains and head out Sunday morning. We chose the latter, heading south out of Pigeon Forge and taking a run through the mountains on the way home.

If anyone is worried about Fox Mustangs being generational cars that will someday fade into extinction, we are here to tell you that won’t be the case. Our Dream Auto Museum and Restorations had three Foxes at Ponies in the Smokies, all owned by young dudes. In the foreground is Rob Ruska’s hatch, followed by recent feature car Kody Rydge Smith’s coupe and a future feature car in Manir Karim’s Four-Eye. It is good to see younger people interested in (and more importantly, building) Fox Mustangs. We have plans to shoot Ruska’s hatch for a feature soon.