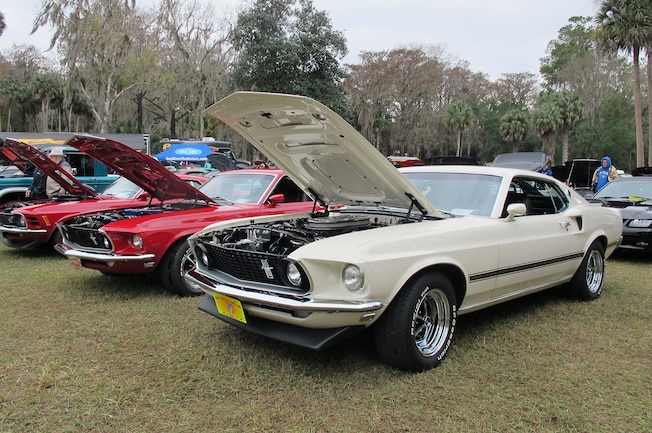 For the majority of Mustang and Ford enthusiasts in the Sunshine state, the first weekend in January is traditionally marked off as “busy” on their calendars months in advance. It is that weekend that people from all over the state, and honestly from many parts of the country, come to congregate at the Silver Springs State Park in Silver Springs, Florida for the annual National Parts Depot Ford & Mustang Roundup. Now in its 23rd year, the annual show is a great way to kick off the show season in the southeast for many.

Over the years the show has adapted and changed with the times, including the Silver Springs attraction being turned over to the state of Florida in 2013 (almost preventing the 20th anniversary show in 2014 to not happen!) and the show becoming a one-day event last year. These things have not deterred the hard core fans of this show, who turn out every year to see longtime friends, listen to some live music, and enjoy the natural beauty of the state park.

The 2017 show did have some foul weather mixed in with the fun. Friday’s Pony Trails event went off without a hitch, missing the rain that came into town in the early evening and lasting until registration opened on Saturday morning, making a soggy mess of the registration and photography staff. The park itself had a few muddy spots, but overall parking went off without a hitch thanks to the “all hands on deck” NPD staff. Saturday started off in the mid to lower 60s and the mercury just kept dropping all day with the show’s awards ceremony starting around 4:15 pm at a brisk 44 degrees. The sun did its best to shine, but only showed itself in the later part of the afternoon, taking some of the chill out of the day-long wind gusts. The good news is, this type of cold and wet weather has never been a yearly occurrence, often happening every few years (the last really cold show was 2010) and with 2017 being both cold and wet, we’re sure next year’s show will be full of bright sun and Florida warmth, so if you’ve never been to the NPD Silver Springs Ford & Mustang Roundup start making your plans for January 2018!

The show weekend actual begins for many on Friday morning with the annual Pony Trails cruise to Cedar Key, Florida. Everyone meets at the Ocala, Florida NPD location and the parking lot fills up fast (there were Mustangs wrapped around the side of the building!).
NPD is open on Friday of course so it’s a great time to pick up those parts you need while visiting the area. Throughout the day NPD’s impressive private vehicle collection is open to the Pony Trails crowd as well.
Before heading out, NPD’s Rick Schmidt holds a brief driver’s meeting to discuss road etiquette and where the police escort will be guiding the cruisers through various intersections on their way out of town. With hundreds of cars on the cruise that is the only safe way to get everyone through intersections and to keep the cruisers together.
Rick busted his Ford GT out of the NPD collection for the day to use as the lead car on the cruise. Talk about riding in style!
Right behind Rick was our partner in crime Courtney Barber from Team Mustang Girls with her Mustang hardtop, our January 2017 issue cover car!
The hour plus drive out to Cedar Key had fellow motorists and pedestrian traffic doing double takes at the several mile long caravan of Mustangs and Fords of all years/generations rolling down the highway.
As we said in our main story, the rain arrived Friday night, but Saturday morning it finally relented towards the end of registration.
As the registrants were parked and the show got under way a live band (for the second year in a row) played some great music from the main stage area.
NPD’s top vendors are invited out each year to show new products, answer product questions, and to award trophies/products to their favorite vehicles (see winner’s list below).
Each year we walk the show field and agonize over the decision of our Editor’s Choice award. There are so many beautiful Mustangs, from pristine restored cars to detailed Restomods, we wish we could hand out something to everyone. This year we bestowed our award upon Daphne Norris and her 1965 convertible. We were happy to find out we weren’t the only ones ogling her sweet Mustang, as she also took home the Best Mustang award from the show. Congratulations again Daphne!