How the OPTIMA Search for the Ultimate Street Car Works

A Track For Every Mustang 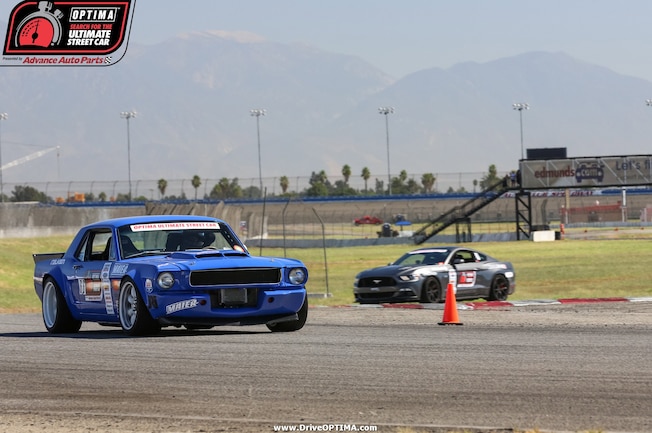 OPTIMA's Search for the Ultimate Street Car, presented by Advance Auto Parts, just finished up its third full season of competition and the numbers are simply staggering. More than 350 cars, spanning more than six decades of production, have competed in one of four different classes in each of the last two seasons. How has the series attracted so many cars and so many different kinds of cars?

It starts with an emphasis on what's important—a safe and fun experience. There's certainly competition involved, but it's a friendly form of competition and takes a backseat to a safe weekend, where drivers of all skill levels from absolute beginners to national champions can get more time behind the wheel than they'll experience anywhere else. The series and the competitors in it are all very welcoming of newcomers and eager to offer assistance.

From that point forward, it really becomes more of a family atmosphere, where dozens of competitors from around the country converge on a racetrack to have fun with their friends and cars in a way that most folks only discuss in bench-racing conversations. The rules of the series are relatively minimal, which helps make for an inclusive experience. Just about any street-legal production car or truck can compete and this series has seen just about everything from a 1940 Ford coupe to a 2016 Porsche GT3, with everything you can image in between from a Super Duty pickup to Mercury station wagon.

How can so many diverse vehicles compete against each other and actually be competitive? The way the classes are divided up helps a great deal. Anything that weighs less than 3,200 pounds runs in the GTL class for lightweight cars. This class also has a minimum weight, based on the vehicle's original curb weight, to keep folks from going overboard with weight reduction modifications.

So how does vintage muscle compete with modern performance? It generally doesn't, unless they both fall into the lightweight class. The series has a GTV class for vehicles built before 1990, which may seem like a somewhat random date as it relates to a specific manufacturer, but it does have some general purpose behind it. That year splits the generational runs of Mustangs, Camaro and Corvettes, so it doesn't favor one model over any of the others.

Right around that timeframe several modern performance advancements began to appear in production vehicles, including fuel injection, anti-lock brakes, and more of a focus on aerodynamics. Many of the vintage cars in the series have these modern features and more, including traction control, but there are also quite a few running old school setups.

The late-model classes are split into GT for four-seat coupes, sedans, and pickups and the GTS class for two-seaters and anything that weighs over 3,200 pounds that has all-wheel drive. That leaves the bulk of the vintage cars in the GTV class to battle it out on the track and off, which brings us to another great equalizer in this series—the Lingenfelter Design & Engineering Challenge.

While some competitors don't like the idea of their score being determined by anything but their performance on the track, the Design & Engineering portion of the series helps give the “street car” in the series title real meaning. A competitor can show up in a gutted race car with license plates that is technically street-legal, but those cars score so poorly in Design & Engineering, that it's a challenge for many of them to finish in the top-five in their class. Design & Engineering can also bite a lot of legitimate street cars; if they are missing some basic items, like a functional radio, horn, and lights, they'll lose valuable points. However, it can also help boost the score of a competitor, who has an exceptionally well-built car.

Another equalizer in the series is the minimum treadwear requirement for tires. All the horsepower in the world doesn't matter if it can't be planted to the ground. The requirement of 200 treadwear on all tires minimizes the potential for a horsepower war, while also keeping the series affordable to the point that several other sanctioning bodies have also embraced the same requirement. Even if a car isn't the fastest on the track or the most stunning in Design & Engineering, Spectre Performance steps forward at each event with their Spirit of the Event invitation to the 2016 OUSCI.

As much as this all sounds like an inviting series, the proof of whether it works as described is in the results. Each of these qualifying events sends at least five cars to the SEMA Show in Las Vegas and the OPTIMA Ultimate Street Car Invitational (OUSCI). A competitor's best three performances of the season also count toward the season-long points chase. Has classic iron been able to keep pace with modern muscle in this series?

In a series that has vehicles spanning more than five decades, ten invitees to the 2016 OUSCI were built before 1970 and 27 cars and trucks were built prior to 1980. The second-highest point total in the series during the regular season was posted by a car built in the 1960s, and Mike Maier's 1966 Mustang came within four points of winning the GTV class championship.

The opportunities are clearly there for someone who wants to compete against legitimate street cars or just have a fun weekend, enjoying their car on bucket list tracks in every corner of the country, from Daytona to Portland and everywhere in between. The 2017 schedule has seven races at tracks between New Jersey and California, and registration for those events will open at www.DriveOPTIMA.com any day now. Most of these events do sell out, so it's best to sign up sooner, rather than later.

Why is it tentative you ask? Well, we are not NASCAR, IMSA, or PWC, Trans Am, etc., and if those organizations decide they want a particular date at one of these tracks, they get priority—it's as simple as that.