Searching for the Ultimate Street Car - One More Time 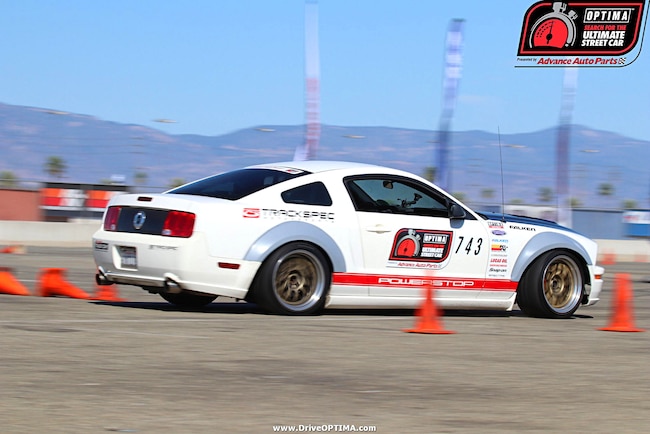 It began in California and OPTIMA's Search for the Ultimate Street Car, presented by Advance Auto Parts, ends in California...sort of. Ten events have now been run, with the first taking place at Thunderhill and the final taking place at Auto Club Speedway in Fontana, California. Each event promised invitations to the SEMA Show in Las Vegas and the OPTIMA Ultimate Street Car Invitational (OUSCI), so there is technically one last event, but Fontana wrapped up the regular season.

Regular season champions were crowned in each of the four classes and the final five invitations to SEMA and the OUSCI were handed out to the lucky few in this sold-out field of competitors. What Fords may have lacked in quantity, they more than made up for in quality, with several strong performances, starting in the GTV class for vintage iron. Jake Rozelle's 1969 Camaro notched the top overall finish in the Lingenfelter Design & Engineering Challenge, which meant Mike Maier's 1966 Mustang would have to find eight points in the three timed events to catch and pass Rozelle for the class win.

Besides the nine Cobras that may have been produced in 1993 in a non-clearcoat red, Scott Anthony's Teal Metallic paint was the rarest color option on 1993 Cobras, with just 1,355 produced. Rare to see one in the wild these days, let alone one that is being tracked.

Maier started to close the gap in the PowerStop Speed Stop Challenge, where he picked up three points on Rozelle and added another point on the Detroit Speed Autocross. That moved him halfway to his goal after the first day of competition and meant he'd need to gap Rozelle by four spots on the Falken Tire Road Course Time Trial to claim the overall victory. Maier did nearly all he could, notching a second-place overall finish and 99 points. However, Rozelle finished right behind him in third-place overall, leaving a gap of two points to decide the GTV class win. The margin was just as tight in the chase for the season championship, where Rozelle edged out Maier for the GTV season championship by just five points.

With every production car under the sun eligible to compete in this series, there's no telling what might show up from one event to the next. The GTS class at Fontana ended up with five different manufacturers finishing in the top-five. Todd Earsley's 2016 Focus RS represented the Ford camp well in fifth-place, considering the car is driven-daily (over 16,000 miles already!) and much closer to stock than many of the cars that finished ahead of him, including a Viper, Porsche GT3 and Evo X. Earsley's season-long point total was enough to get him an invite to Vegas and we expect his Focus will be even further away from stock by the time it gets there.

The GTL class for anything that weighs less than 3,200 pounds is regularly the toughest of the four classes and series Grand Champion, Rich Willhoff, showed why that was the case, posting the fastest overall time in each of the three timed segments. In a class dominated by Corvettes, one wouldn't have expected much from Jonathan Lugod's 2015 Focus ST. However, Lugod more than held his own, notching a sixth-place finish in class and a sixth-place overall finish in the Detroit Speed Autocross.

The GT class is typically one of the largest in the series and often where the most Fords can be found. That was certainly the case at Fontana, where the 26-car class had a dozen blue ovals in the mix. Ultimately, it was Jeremiah Stotler's 2015 Mustang GT that emerged with an invite to SEMA and the OUSCI, thanks to a four-point edge over Kurt Robinson's 2015 Camaro. Andrew Nier's 2012 Mustang GT finished further down in sixth-place, but picked up enough season-long points to grab a spot in the field as well.

With the field from the qualifying series now set, the competition moves to the grand finale in Las Vegas, immediately after the SEMA Show. Ten more entries will be selected from the show floor, but it will be the ultimate challenge for any of them to hang with the cars that have already been battle-tested in the qualifying series.

Never let it be said that there's no telling who will show up at these events. The coolest people in the automotive world will show up, including Bruce Cambern (right), whose Cobra won the 2009 OUSCI. It also happens to be the world's last original-owner Cobra, since Carrol's passing.