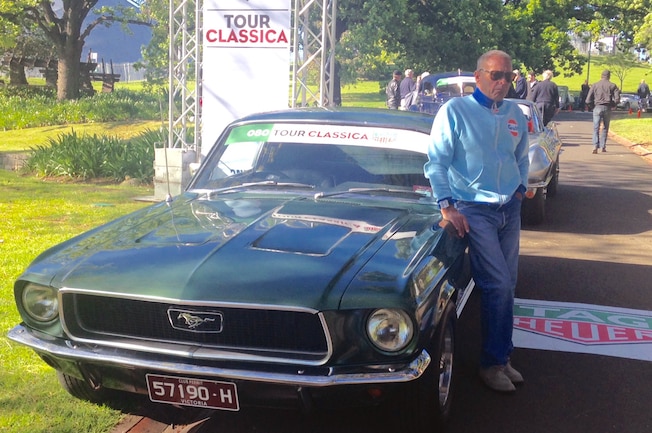 Over the weekend of October 21-23, the annual Motorclassica Concours D’Elegance was organized in a heritage building in Melbourne, Australia. Motorclassica is in its seventh year and had a wide range of vehicles on display, with examples from the late 1800s up to 1970s, including more than a few Mustangs.

With a diverse variety of vehicles on display, the concours attracts as many as 25,000 patrons over the three-day indoor event. As a Motorclassica Advisory Board Member, Australian Shelby Registrar Nez Demaj was asked to host their V.I.P. guest Chad McQueen (son of Steve) as well as his son Chase. On Thursday morning prior to the show, Nez had organized a replica Bullitt 1968 Mustang for the tour, which was a 30-minute drive from the city of Melbourne to the Motorclassica Exhibition Building. This is when he met Chad and Chase McQueen for the very first time, which Nez described as, “a pleasant experience. Chad’s looks resembled his late father to a tee, and while we were in the Mustang on tour, I got to meet a very cool and down to earth guys in Chad and Chase. During the weekend, I had the pleasure of escorting Chad to quite a few publicity speeches on stage, TV, and on the local radio, and also many autograph signings with his fans. So, at the end of the event, we had become friends with an invitation to me to visit the States in the future. It’s amazing how classic cars bring people together all over the world!”

Truer words are rarely spoken—cool cars and especially Mustangs bring us all together in good times and bad. For more on the Mustang Owners Club of Australia, check out http://shelby.org.au, and for more on the Concours go to http://www.motorclassica.com.au/about-concours-delegance/.