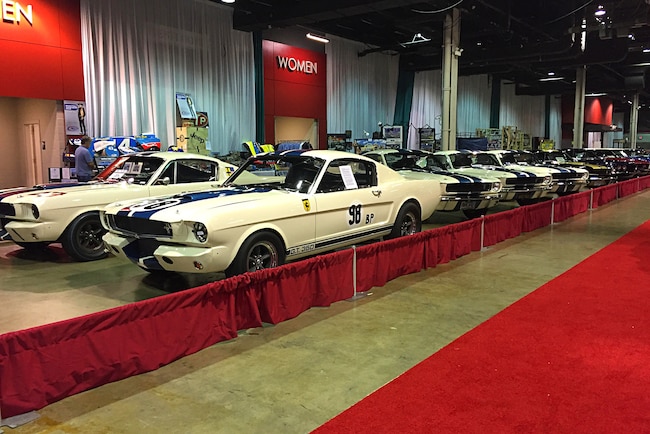 This show never ceases to impress. I had read about the Muscle Car and Corvette Nationals (MCACN) for years but didn’t attend one until 2014—and was totally blown away, with a collection of Boss 429 Mustangs in every color plus more rare and unseen (and sometimes unknown) musclecars of all kinds. Last year was more of the same, with a huge collection of Boss 302 Mustangs. The 2016 show, held the weekend of November 19-20 at the Donald E. Stephens Convention Center in Rosemont, Illinois (right next door to Chicago O’Hare airport), featured every color of 1971 Boss 351 Mustangs plus a special “Cars of Carroll Shelby” section chock full of Shelby Mustangs, 289 and 427 Cobras, and even a GT40 race car.

The convention center covers 400,000 square feet of indoor exhibit space and it was packed to the brim with not just Mustangs and Fords, but rare and special muscle cars from all the other OEs as well.

MCACN’s mission statement says, “As producers of The Muscle Car & Corvette Nationals, we provide the ultimate gathering place for enthusiasts, young and old, who have a passion for horsepower. We host this indoor showcase for the cars that have become a part of our lives and to provide a place to revive past memories and friendships while opening the door to many new memories and friendships. About our team: unlike many other show promoters, we live and breathe cars on a daily basis. Our team is made up of fellow collectors who currently own and maintain a wide variety of collector cars ranging from AMCs to Z/28s. We have shown, raced, toured, bought, sold, and traded many wheeled vehicles and we have all traveled many miles to participate in automotive events in and outside of the U.S.A.”

The highlights for Mustang fans were of course the Boss 351 Invitational (which we’ll show more in-depth in a story to come later) and the Cars of Carroll Shelby, all of which were spectacular, but of particular note are the following:

Brian and Samantha Styles’ 1967 Shelby G.T. 500 convertible: the ONLY ’67 G.T. 500 convertible in existence, Brian has fought off the controversy that his Mustang is a “prototype” Shelby since it’s the only one, but he has recently uncovered all of the documentation to show that it was indeed a production car built immediately before Ford pulled the contract from Shelby American and built the rest of the Shelby Mustangs by themselves, cutting Shelby out of the mix. There’s a LOT more to tell about this car, and we’ll bring it to you as soon as can get everything out of Brian!

Next to the Styles’ car was a black 1969 G.T. 500 convertible with an equally interesting history—it was a factory prototype thought to have been crushed back in the day, but somehow survived and was documented and restored, then unveiled here at MCACN 2016. More on that one to come as well!

Then of course there was one of the very few King Cobra drag cars, Bobby Unser’s winning 1969 Pikes Peak Torino (with Boss 429 engine), and again the Boss 351 Invitational featuring Mustang Boss 351s of every funky color available in 1971. And if you’re not a pure Ford loyalist, there are amazing examples of muscle cars from Chevrolet, Pontiac, Buick, Oldsmobile, Dodge, Plymouth….every manufacturer including a few Studebakers. There are also plenty of traditional muscle car “show cars” and custom builds like you’ll find at any indoor car show—truly something for everyone at MCACN. If you’ve never been to the show, do yourself a favor and make plans to attend next year. The only way you’ll be disappointed is if you’re into British sports cars or exotics like Lamborghinis and Ferraris, ‘cause this show is about Muscle Cars!

Cars will be subdivided into Stock Concours, Period Correct Concours, and Street Stock/Modified categories. Participants do not compete against each other. Each participant begins with 1,000 points and a blank judging sheet and deductions are taken for incorrect, dirty, or missing parts. Each participant has the potential of having a perfect vehicle when the judging begins and depending on the number of deductions the judges apply, will end up with a Gold, Silver, or Bronze level score in their class. Here are the classes for Fords: 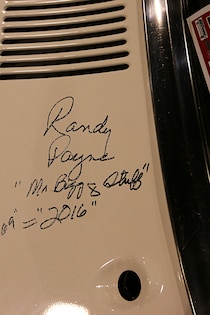