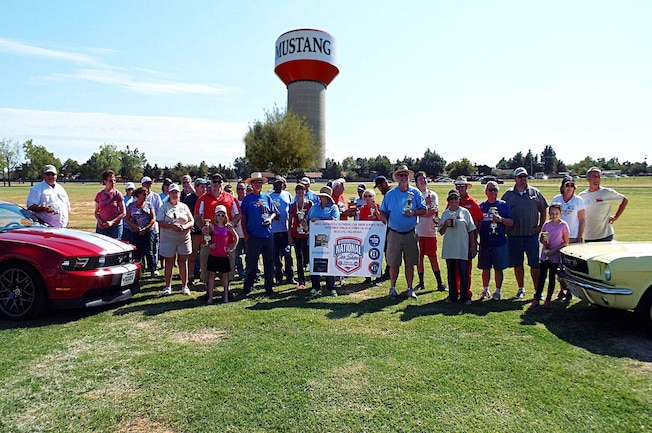 You’ve probably seen stories on the M6A on Mustang-360.com before, but in case you haven’t, it’s a club dedicated to 6-cylinder Mustangs and the people that love them. If it’s a Mustang and has an inline or V6, it’s welcome in M6A. Club president Terry Reinhart said, “The Mustang Six Association continues to grow and is showing the Mustang world how remarkable the 6-cylinder Ford Mustang truly is, both the inline-6 and the V-6. Our members continually are winning car shows with their ‘just a six cylinder’ Mustangs. We now have almost 1,200 members in 17 countries around the world. If you own a 6-cylinder Ford Mustang of any year, I invite you to join us and make your six one of ours!”

The M6A just wrapped up its second national show in the appropriately named Mustang, Oklahoma, after a Pony Trail cruise to Classic Recreations in Yukon, OK, and then the Oklahoma Route 66 museum in Clinton. After the Friday night banquet (where the OK Mustang Club provided some killer BBQ), the show kicked off in the Mustang Town Center with M6A members coming from all different parts of the country, several traveling over 1,000 miles to get there.

There were 43 6-cylinder Mustangs participating in the show, which was sponsored by National Parts Depot and Resurrections from Rust LLC, a first generation Mustang restoration and repair service "restoring memories and creating new ones for the future."

The award ceremony started at 3:00 PM. and all cars were judged by OMC using MCA's modified judging rules. Along with first, second, and third place trophies there were four specialty awards presented for Best of Show Inline-6, Best of Show V-6, Furthest Distance Traveled, and Best Owner Restored 6-cylinder Mustang. A new award was presented at the show: the Marlene Hines Award. OMC and M6A member JJ Hines lost his wife Marlene just prior to the club’s Manassas Regional Show in May of this year. Undaunted, JJ attended the show. As a result, M6A created an award in her honor, which would be a Mustang that Marlene would have liked and JJ’s family picked out—a white 1966 owned by Daniel Lombardi. Unknown to JJ and his family, Daniel had also lost his wife two years ago.

Next year’s National Show will be held in Nashville, TN. The date and venue are still being worked on, but preparations are being made to make it the M6A’s best and biggest National yet, with a goal of a minimum of 100 6-cylinder Mustangs. Will yours be one of them? Check out http://mustang6association.org for more information.