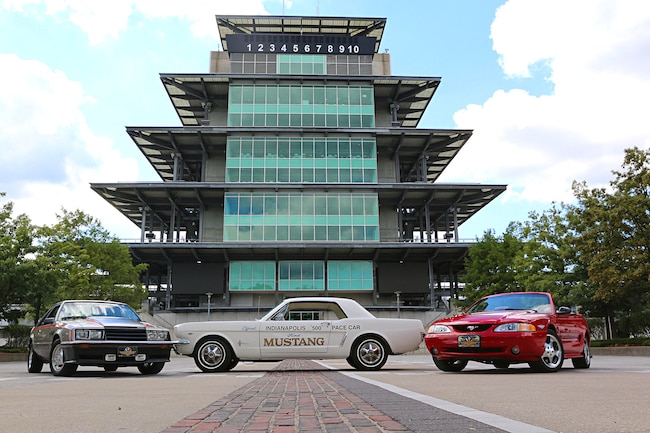 Two years ago, the Ford Mustang hit its 50th birthday. So the Mustang was only eight years old when a club was formed dedicated to it, the Mustang Club of America. The car itself had two big 50th birthday parties in 2014 (in Charlotte, NC and Las Vegas, NV), and the club just blew out 40 candles on its cake at the legendary Indianapolis Motor Speedway the weekend of September 2-4, 2016.

The Speedway is a holy place for race fans, and was the perfect setting to host the MCA’s 40th Anniversary. This wasn’t a typical MCA show, with hardcore car judging and trophies. Rather, it was just a party for MCA members to hang out with each other and their cars, maybe take some laps of the Speedway’s road course, participate in the autocross, and for the various clubs to get together. The weather could not have been better, with temps in the high 70s, not an ounce of humidity, and just enough clouds to make the sky pretty.

The action kicked off on Thursday night with a get-together inside the amazing Indianapolis Motor Speedway museum between turns one and two in the infield, with food, drinks, and fellowship among the Mustang faithful. If you’ve never been and you care about racing history, the museum should definitely be on your bucket list to visit. (Your author grew up watching the Indy 500, and most of the cars he drooled over as a kid and young adult are on display there). Friday the 4th was more or less setup day, as the Mustangs made their way inside the track, and on Friday night an attempt was made to set the Guinness World Record for the largest parade of Mustangs. We have another story on Mustang-360 on that parade, with photos of nearly every car that participated, so check it out.

In the temporary buildings erected in front of IMS’s famed Pagoda, were displays featuring the likes of Ohio George Montgomery’s twin turbo Boss 429 drag Mustang (now owned by Bob Perkins) and the Platte & Payne Super Stock Mustang (owned by Rick Kirk of Ripley, OK). There was one building full of vendors selling everything from memorabilia to wheels.

Though the event carried over to Sunday, it was essentially a wrap on Saturday night, with a banquet that had a few speakers and entertainment. Mustang Monthly contributor and Mustang restoration guru Bob Perkins also received a Lifetime Achievement Award from the MCA for his contributions helping with MCA judging. Congrats Bob!

Also check out the video we shot out the window as Mark Thomure took a female passenger on an unintentional thrill ride around the IMS road course, which runs in a clockwise direction (opposite of oval races).