A terrifyingly spectacular way to end the long day three of our Rally North America adventure. 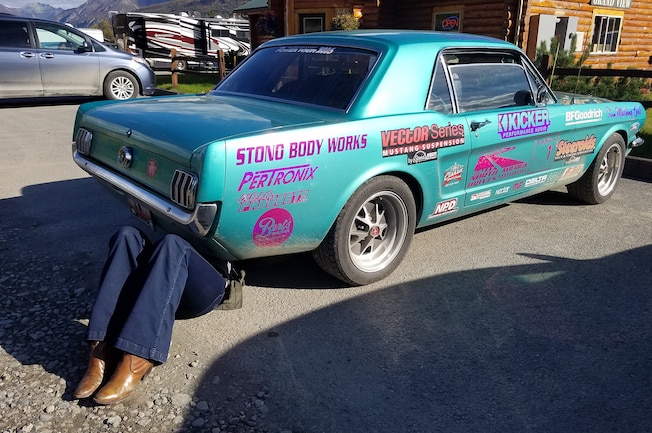 After over 100,000 rally and event miles in my Mustang, I have come to expect that something will happen every now and then. I try to prepare for it by bringing tools and spare parts, but Murphy's Law usually prevails and there's always something missing. Everyone always asks me, “what do you do when you break down?” Well, my Dad taught me well—I remember the first time I broke down after moving away from home and I called my dad. Mind you this was before cell phones were smarter than us—back when they actually were used as just a phone—and his response in my time of need? “Do you see a gas station? Well walk to it!” As dumb as it may sound, those words have helped me a lot. My twist on it: giving up is never an option, so fix your junk and keep going! And on that note welcome to Day three of Drive Alaska 2016!

Up to this point the car had been doing great and running like a champ. The roads were rough on the way out but we were traveling alone, and I took my time getting through the bumps. Now that we were with the Rally North America group, the whole pack mentality kicked in. And while I do have a 347 stroker from Ford Performance, overdrive from FB Performance, a nine-inch Currie rear end, big brakes from CPP, and upgraded suspension from Speed Direct, it's still a lowered steel box and it will only take so much of a beating before it turns on me. I was trying to keep up with the group that were all in rental trucks and one little half SUV thing that Brian Shannon got stuck with, and that was my first mistake. My theory is to stay within your comfort zone.

It took a while to learn that lesson but I like to think that with age comes some wisdom. As much as it's fun to try to keep up with the cool kids, I have chosen my stead in this rally world and it's 50 years older than most of the other cars. Respect the car and she will be good to you. If you push yourself beyond your happy place, bad things tend to happen. And that's what we did. On the way out of Girdwood I was riding behind the Suburban trying to keep up and nailed a bump hard. Everything seemed ok at first but as we got out of the construction zone and started up into the mountains I could tell something wasn't right with my brakes. The pedal was soft and going down further than it should. I still had brakes but as my only car, rally car, and daily driver, I can tell the minute something changes. Many mechanics think I'm nuts for that reason because sometimes I can't use the proper terminology to explain what's wrong, but I know when something's not right!

We stopped at an overlook and I could see there was a leak from the rear line coming from my dual master cylinder. It wasn't huge but enough to drop the fluid level to half in the back. I filled it back up and we continued on slowly looking for a better place to stop and evaluate the situation. Luckily, we found the Grand View Cafe and RV Park (don't ask what city it's in, they don't even know!) But you can find the beautiful spot at mile marker 109.7 on the Glen Highway. I snuck under the car and made the mistake of touching the line. That was the final poke it needed and it split off and dumped the rest of the fluid. Note to self: never touch anything! While I had an extra hard brake line, I was lacking a flare tool. I debated on using vice grips to clamp the line like we did on the Hot Rod Power Tour, but the bumps on the Alaska roads were a lot less forgiving and I was afraid that solution might become a bigger problem. So the next option? Let's see if AAA works in Alaska.Guess what, it does! We talked to Glennallen Fuel and Towing and not only would they come get us, but they were willing to fix the line at their shop, which was on the way to our destination for the night in Valdez.

Another Rally team had stopped to make sure we were safe and we all sat down to enjoy the view and a pizza while waiting on the tow truck. And wait we did... After several hours and many calls to Scott Feicht at Glennallen Fuel we knew help was on the way and forced the Barts, our “leave-no-man-behind” friends, to continue on before they ended up having to drive in the dark. I started to accept the fact that we might not make it to Valdez for the night. The shop in Glennallen was right next to a motel, and I told myself just to be grateful that help was on the way. After six hours we were at the shop with the car and Scott had it fixed in no time. On the lift we could see that my back air shock had given up the fight—I guess our 200 pounds of luggage and tools combined with the unforgiving roads of Alaska were just too much. Scott relocated the line on the rear end to allow a little more room for the bumps, so thank you Scott! So there we were, right next to a motel, all fixed up and ready to roll in the morning and I just couldn't get Valdez out of my mind...

Well if you know me at all, you know I'm pretty much a stubborn A-hole when it comes to giving up on anything. I should mention that at the beginning of the rally we received The Longest Distance of All Time Award from Rally North America, a huge honor. But in my head, even though we had already gone 5000-plus miles just to get to the rally, we still hadn't earned it. And now the award had turned into bad juju in my head, very similar to the episode of the Brady Bunch in Hawaii with the cursed tiki idol. I never want to be given anything; I want to earn it and I felt in order to do that we had to make it to every stop each night. Even though Rally North America organizer Tony Intrieri disagreed, I was still not convinced. It was almost midnight, pitch black outside, and we still had over 100 miles to go on some bumpy windy roads to Valdez and instead of walking to the motel next door, we packed up the car and hit the road again. And I'm happy to report we made it to the hotel by 3:00 am! It was a terrifyingly spectacular way to end the long day! Which at the time I thought was our hurdle for the trip. Little did I know what the Denali highway had in store for us the next day!

Check out the rest of the Drive Alaska 2016 journey here!