Mustangs at the Woodward Dream Cruise

The 2016 Woodward Dream Cruise was insane—again. Here are the Mustangs we saw on Woodward Avenue 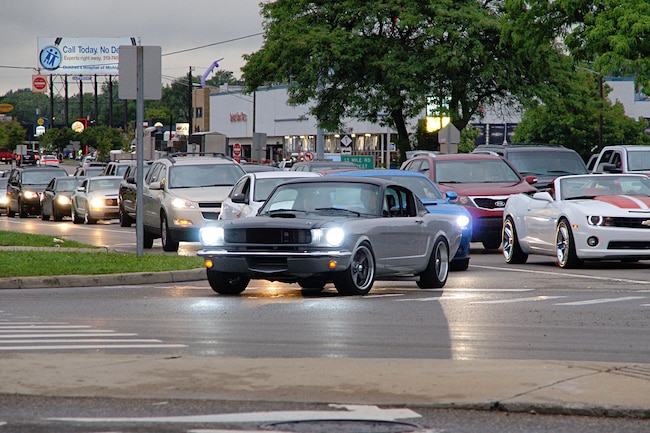 Confession time: Back in 1995, when I was a staff editor at Hot Rod magazine, our receptionist forwarded a call to my phone from someone discussing the idea of resurrecting cruising on Woodward Avenue in suburban Detroit. Of course I knew what Woodward Avenue was—the street from downtown Detroit that runs 17 miles north through Pontiac, Michigan and beyond, was infamous for street racing, including a lot of OE manufacturers “testing” their hot new musclecar packages against regular Joes, at night, completely illegally. The stories we’ve read and heard are legendary—imagine pulling up to a red light in your family car and having your tail waxed by a barely streetable factory prototype that turned out to be the 1968 Cobra Jet Mustang or Hemi Roadrunner—and they make you wish you had come of age in the mid- to late-‘60s when the action was red-hot.

Either the person on the other end of the line that day was vague in what they were looking for, or I was too wrapped up in helping to plan our own inaugural Power Tour to understand the reality of what she was proposing—either way, I (and by proxy Hot Rod) missed out on the chance to be on the ground floor of what has become the world’s largest one-day automotive event.

The initial idea was to revive Woodward cruising as a fundraiser to build a soccer field in Ferndale (Michigan), but the first Dream Cruise in 1995 was ten times bigger than the organizers expected, with a claimed 250,000 people participating. This year’s Dream Cruise, officially taking place on Saturday August 20, drew roughly 1.5 million people and 40,000 classic cars from around the world. The numbers are a mere guess really, because how can you accurately count something that’s wide-open to the public and free of charge? But we don’t for a second doubt those numbers, as Woodward Avenue was essentially an eight-mile traffic jam filled with musclecars, street rods, trucks, motorcycles—any vehicle with wheels (and a few without) were on Woodward making laps, and it was a sight to see.

As we said, the Dream Cruise is considered a one-day event, with the bulk of the action taking place on Saturday, but in reality it begins on the Tuesday before and steadily builds as the week progresses, culminating in the insanity of Saturday. All of the domestic manufacturers are there—Chevrolet and Chrysler have big displays on Woodward and Ford owns the town of Ferndale, where they host Mustang Alley (PUT LINK HERE). A new feature this year was Roadkill Nights (sponsored by Dodge), which brought back “street racing” to the Avenue, by blocking off Woodward at 17 Mile Road in the town of Pontiac. It was a zoo, and was obviously heavily populated by Dodge and Chrysler vehicles, but we did spot a few late-model Mustangs making passes, which you can see in the photo gallery below.

So check out that gallery and the Mustangs we found taking part in the Woodward Dream Cruise. Because the event is so huge and packed with constant action, it’s impossible to fully cover by one person, meaning there were a lot more Mustangs participating than you see here—but you get the idea. 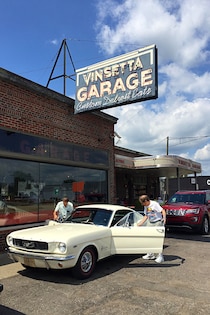