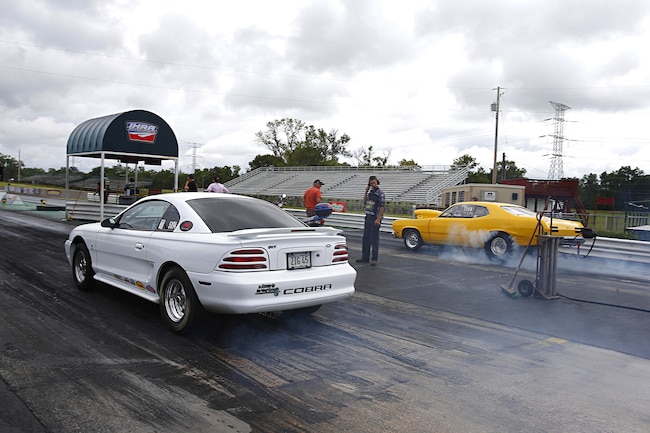 The 2016 Ford vs. Mopar series kicked off August 20th at Cordova International Raceway in western Illinois. The stage was set for a battle of the brands with a Friday night test and tune that saw mostly older Mopars getting warmed up to take on the slew of Ford products in attendance.

This series will feature Ford vs. Mopar at three IRG tracks in August and October. Fans and racers will enjoy show cars, drag racing, a swap meet, and much more. There will be a variety of bracket classes for all levels of performance, plus a ton of show classes with some nice awards. Please note that the events at Maryland International Raceway will be separated into brand-only weekends, one being the Ford Fever Classic and the Mopar Eastern Classic on two consecutive weekends in October.

Jesse Steines heated things up with his 2012 GT.

Cordova International Dragway is a neat track, located near the Mississippi River that’s been in business since the early 1960s. Many of the greats have competed on the renowned quarter-mile and we were excited to see some amazing Fords take on the Mopar contingent.

The Ford vs. Mopar series offers a variety of race and show classes with excellent payouts and awards for show participants. Unfortunately, rain was in the forecast for Saturday’s event and the weatherman, for once, was spot on. After a cloudy morning and a few test runs, the sky opened with pounding rain that cancelled the event.

This Comet GT belonged to Brian Matney.
Here’s another Merc getting the jump on a Mopar.

Nevertheless, we were able to capture a handful sweet show cars, along with a couple of hours worth of racing action. Local participants brought out some great cars, including Bill McFeeters Trans-Am-themed 1967 Mustang, and Steve and Andrea Steines’ 2012 and 1969 Boss 302 Mustangs. We also spotted a few Bob Glidden replica race cars that sadly didn’t get to hit the track.

Bill McFeeters modified his 1967 Mustang for handling and to capture the old Trans-Am look. It was a homebuilt project with a 289ci engine, NASCAR-style truck-arm rear suspension, three-speed manual and custom interior. He also won best Race Car. 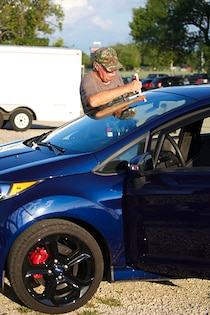