Jay Leno and the Boss 429 Mustang 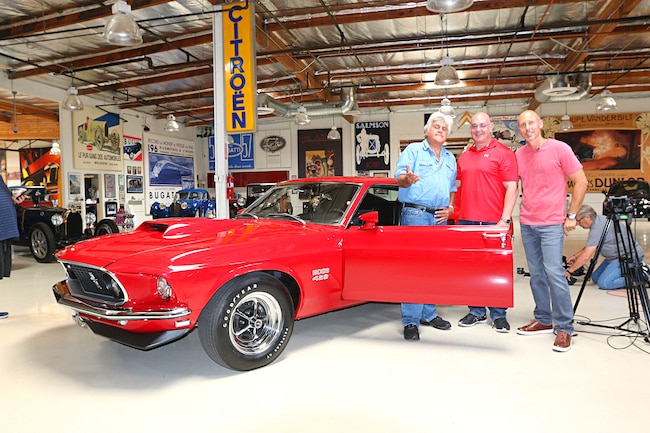 Occasional contributor to Mustang Monthly magazine, Marcus Anghel, called us up the other day with an offer that was hard to refuse. He had just finished a year-long restoration of Eric Felix’s prized 1969 Boss 429 Mustang at his Scottsdale, Arizona shop, Anghel Restorations, and after showing it to the producers at Jay Leno’s Garage, they invited him to bring it to Jay’s infamous garage in Burbank, California to film an episode of the show. Marcus asked if we wanted to tag along and see what it looks like as they tape an episode, and we jumped at the chance.

Located in several non-descript warehouses near the Burbank airport (and conveniently about three miles from where I live), Leno’s Garage is the place of car guys’ and girls’ dreams. Leno has his regular show, Jay Leno’s Garage, on CNBC and also a very popular YouTube channel. If you’ve ever watched one of the shows, then you already know how diverse and unbelievable his car collection is, not to mention the dream shop that is the attached Big Dog Garage, where his cars are restored and chief mechanic/fabricator Bernard Juchli keeps everything running. That’s right, every car in the collection runs and drives, and Leno drives them all on a regular basis—even the turn-of-the-century steam cars, jet bike, modern supercars, and oddball and rare European sports cars.

Wiping the dust off the Boss before shooting.
Shooting the engine compartment.

Leno has a few Ford musclecars, including an original ’65 G.T. 350 Mustang, a Falcon Sprint, a new GT350R, a last-gen Ford GT, and even one of the original Shogun Festivas, so Eric’s Boss 429 was right at home in the garage. The show on Eric’s car is for the YouTube channel, and should be live around the end of June 2016, so make sure to check it out.

Looking behind the scenes, you can see that the production is far more than one guy with a cheap video camera on a tripod. Even though the finished video just looks like two guys talking about a cool Mustang, then taking it for a short drive, this show is all done with professional equipment and an experienced TV and video production team, custom camera vehicles, and camera dollies—it’s basically what it looks like behind the scenes of a medium-level television or movie set.

Once Marcus had negotiated the Boss-9 between the rows of Leno’s Lamborhinis, 1920s and ’30s Bugatti race cars, and other exotics and gave it a quick spit shine, the lights and cameras were positioned and the interview about the car then took place, for roughly 30 minutes. Leno had never driven a Boss 429 Mustang before, so he was genuinely excited to get behind the wheel and take it for a spin, and Marcus reported that he didn’t drive it like a grandmother—he put the car through its paces, and seemed to truly enjoy the power and the overall solidity of the Mustang.

This is about 1/20th of Leno’s collection. You can see an example of the collection’s diversity here, with 1920s Bugattis sharing the same room as a Hudson, a Chrysler 300, a few Citroens, and some other weirdo cars we can’t identify.

[Ed. note] We’ll let Marcus Anghel himself talk about the Boss 429 he brought to Leno:

This Candy Apple Red 1969 Mustang Boss 429 was originally sold in December 1969 at Rice and Holman Ford in New Jersey after sitting unsold on the lot for six months. Part of the reason was the “high” price of these cars in 1969 as the sticker price was $4,934—which was about a $2,000 premium over a similarly equipped Mach 1 of the time. Also, the United States was going through a recession in 1969/1970, so high-priced cars did not sell that well. Interestingly enough the original owner traded in an original black 1966 Shelby with 30,000 miles as part of the purchase—for a whopping $2,400.

The current owner, Eric Felix from Kennett Square PA, bought the car from the original owner after hearing about it becoming available from a mutual friend, and especially when seeing all the original paperwork that is included with the car. Original documentation is always a bonus with any car, but especially with one of these rare Boss 429s. 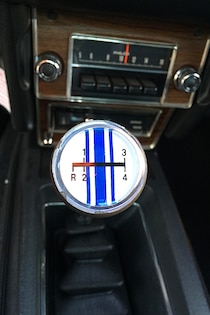 I, Marcus Anghel from Anghel Restorations, got involved with the car after meeting with Eric and seeing the car in person. I knew right away this was a car I was going to work on. I only like to work on Mustangs that have an interesting story or history behind them that peak my attention. Original, documented, low-mileage, rust free cars are as good as it gets, and this car had it all. Once I got the car almost finished I posted some pictures online and heard from someone in Germany through Facebook. He had never heard one of these running and made me think that we never see most of these cars running anymore—they are pushed in and out of auctions and collections.

So I made a video of the car myself that I posted online, but I knew I could do better. That’s when I contacted Jay Leno since I know they had never done a segment on the Boss 429. I knew this could be a great car, and it was. With all that said and done, on the day we filmed, the driving portion almost didn’t happen. Jay told me that they will only drive it around the block since the car was too nice. Too nice? That’s when I told him that I wanted him to drive the car the way it was meant to be driven, and drive it hard. I want people to see and hear what it’s like to drive one of these because most of us will never have that experience. So Jay just smiled and yelled over to the camera crew to let them know we were taking the “long route” on the highway, which was about 20 miles total.

I guess that’s the power of social media today when someone on the other side of the earth asks a question and puts something like this in motion. And a lot of credit goes to the sound, video, lighting, and editing team that works with Jay. They do an absolute top-notch job.

Of interest to Mustang-360 readers are Jay’s ’65 G.T. 350, his 2016 GT350R, Ford GT, Falcon Sprint (289 four-speed fastback!), and the one-of seven Shogun. For those not familiar with the Shogun, it’s a 1989 Festiva that car guys Chuck Beck and Rick Titus dropped a Taurus SHO V6 into in the late ‘80s/early ‘90s. Leno added nitrous to his, and this little pocket rocket will embarrass many of the European exotics that it shares garage space with. 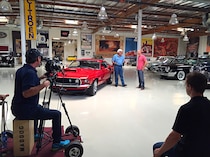 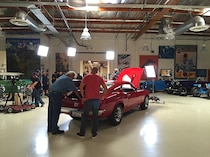