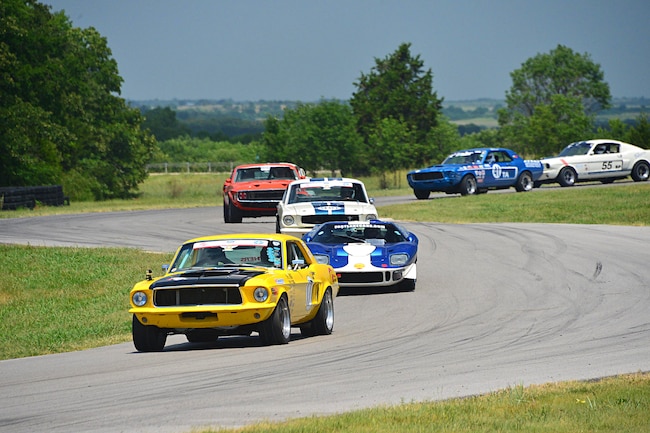 Mid-America, the big Shebang for Shelbys and Fords, has pretty much covered the gamut of what a “car show” can offer, ending with their All-Ford Super Show on Sunday, June 19, 2016 in the parking lot of the Southern Hills Marriott in Tulsa, Oklahoma.

The event actually kicked off four days earlier on Wednesday, June 15th at rural Hallett Motor Racing Circuit, 45 miles west of Tulsa on the outskirts of the little town of Jennings, Oklahoma. Forty drivers gathered on the second floor of the tower at Hallett to listen to Scott Stevens give directions the dos and don’ts of racing. Then, drivers put on racing helmets and suits and headed out to the track for various exercises, starting with braking and following an instructor around the tough, technical course.

Mid-America has developed a reputation for offering time on a Trans Am road racing circuit. Thursday and Friday were open track days where drivers honed their skills prior to the hugely popular vintage exhibition race, won by Vince LaViolette driving a really cool car – a ’65 Mustang that the Venice, California Shelby-American crew of old built to G.T. 350 specifications and updated with an independent rear suspension. Jason Childress of Gateway Classic Mustang, sponsor of track activities all three days, was second in their now famous track-prepped ’68 coupe.

Thursday night saw a six-mile procession of 700 Mustangs and Fords cruise into the Brady Arts district of downtown Tulsa. This event just continues to grow in popularity.

Mid-America held their popular banquet, which filled the huge Marriott banquet hall, on Friday night. Guest speakers this year included Jim Owens of Team Mustang and Gary Patterson of Shelby-American. Saturday was reserved mainly for quarter-mile drag racing at Tulsa Raceway Park, and that evening participants finally get some time off for a little R&R. Many people chose to attend a parking lot party sponsored by Gateway Classic Mustangs and Shelby-American. Everybody ate pizza and got to watch steaming video of Ford’s return to LeMans with their GT-40.

On Sunday morning, we learned Ford won Le Mans, which made the huge All Ford Super Show that much more fun. 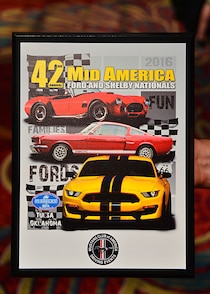