In early June it’s all about Fords, Fords, and more FORDS! 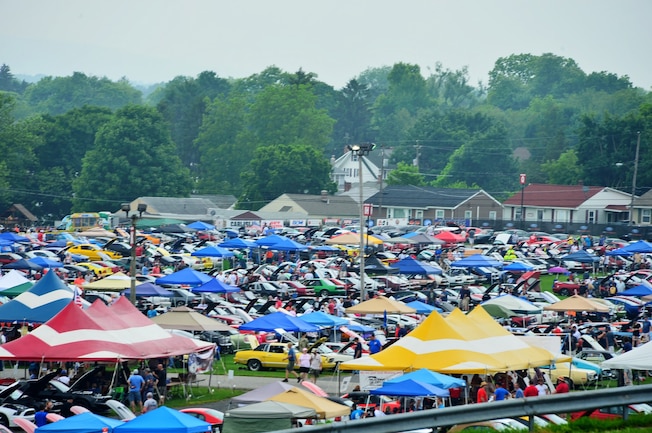 The fairgrounds in Carlisle, Pennsylvania, gets bombarded with cool cars and hot rods several times every year, but in early June it’s all about Fords, Fords, and more FORDS! The three-day Ford party was held on June 3-5 this year, and it was the biggest All-Ford Nats in history, with 3,135 Fords spread out over 82 acres, with an estimated 50,000 people checking them out.

Friday is the day everyone gets there and finds their spot on the National Parts Depot show field, or sets up their swap meet display, and while it threatened rain (and even sprinkled a little bit here and there), the line of cars going through the gates never let up. Saturday was the big day, as usual, and thankfully the sun was out and the rain stayed away.

Once inside the gates, there was a ton of stuff to see. For one, every type of Ford you can imagine was represented at Carlisle, and the organizers thankfully provided areas for everything from Merkurs to Marauders, to trucks, T-birds, Focuses (Foci?), red and yellow Mustangs….you name it, there was a group there that loved it. Among the vendors, the most obvious was Ford Motor Company, with a display showing off their latest performance models (including the white-hot Focus RS) and Ford Racing parts, as well as the Mustang Garage, with a lift and Ford techs from nearby Fred Beans Ford (Boyertown, PA) installing customers’ newly purchased cold air kits, mufflers, suspension parts, and anything else they couldn’t resist buying. Other aftermarket companies were represented, including Classic Design Concepts and Gateway Classic Mustang, among many others.

Roush Performance was also on-hand, with both indoor and outdoor displays, celebrating the company’s 40th Anniversary with both old and new Roush vehicles, including a Gapp & Roush Super Stock 1969 Mustang convertible parked indoors right next to Susan Roush McClenaghan’s (Jack’s daughter) 2010 NMRA Modular Muscle race car. Across from the indoor Roush display were Antonio Fargas (Huggy Bear) and Paul Michael Glaser (Starsky), stars of the ’70s TV show Starsky and Hutch, which was a nice compliment to the roughly 20 Starsky and Hutch “Striped Tomato” Torinos parked outside. Perhaps the biggest “kicker” to the show was on Friday, when the organizers arranged 150-plus red, white, and blue Mustangs in a display that created an American flag, captured on film with a drone.

As with any good show, the swap meet was huge, the burnout contest was brutal, and the bikini contest was, well, hot. If you’ve never been to a Carlisle event, I highly recommend it.