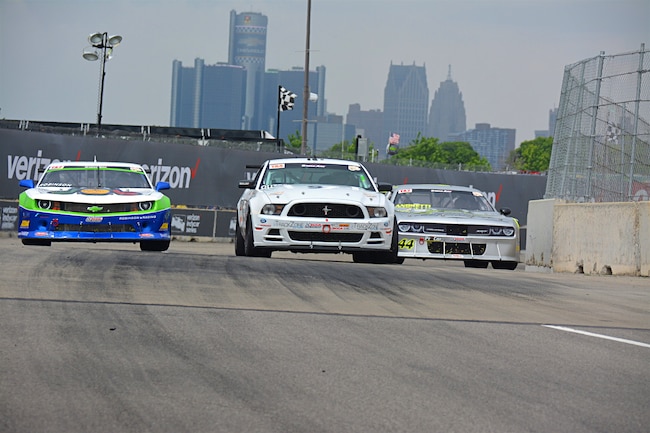 For most fans, the allure of the Detroit Grand Prix is all about open-wheel race cars being flung around with reckless abandonment along the scenic 2.35-mile street course nestled on Belle Isle. This 982-acre island, nestled between the US and Canada on the narrow straights of the Detroit River, has played host to this event since 1992; but, not continuously as city politics, budgets and finding corporate sponsors have interrupted one of the Midwest’s premier racing events on more than one occasion during the past two decades.

And while the race primarily markets the IndyCar series to the fans, the venue also hosts the IMSA SportsCar Challenge and the Trans Am Series. It’s was the Trans Am Series that got our attention, especially with Boss 302S Mustangs banging fenders with Camaros and Challengers in the shadows of the Detroit skyline. Unlike the exotic machinery of IndyCar, one could actually drive some of these Trans Am door slammers on the street but it’s not recommended.

A herd of Boss 302S Mustangs blast through turn two during the Motor City 100 Trans Am at the Detroit Grand Prix.

It was the running of the Motor City 100, two 50 minute Duals during the Detroit Grand Prix, that had some of the best racing of the weekend. Sure, you could say it was just “filler” between the IndyCar sessions, but the Trans Am Series had some of the best racing of the weekend. Think of these cars as the Cobra Jets, COPOs and Drag Paks that run the NHRA Factory Stock Showdown classes. Great side-by-side competition that most fans either miss or don’t know about and such is true with this racing venue. We guess it doesn’t help that the last Trans Am cars to burn rubber and make noise at the Detroit Grand Prix was 2001.

Now, before we go further, we should probably point out that the Trans Am series is no longer owned by the SCCA and instead, is a business venture of a passionate group of ex-racers who formed The Trans Am Race Company, LLC (TARC). Through a five-year agreement, TARC oversees the management and marketing of the Trans Am Series. SCCA Pro Racing sanctions Trans Am events and provides operations services to the series that also includes enforcement of the engine and chassis specs among the various classes that compete in the Trans Am Series.

Dean Martin in No. 52 would claim victory in the first race and runner-up in the second. Heavy traffic, some cautions and sporadic rain kept him form doubling up.

Speaking of classes, Trans Am Series features five different classes ranging from the world-renown GT cars in TA and TA5, to the return of the pony car wars in TA2, TA3 and TA4. These classes can be confusing but they enable racers to build “transition cars” around certain rules that allow the teams to run multiple classes and even other racing sanctioning bodies such as the Pirelli Word Challenge and NASA (National Auto Sport Association) American Iron Series.

Like all racing, there are rules and in the TA4 class the Boss 302S Mustangs play in, they must adhere to what SCCA mandates. For example, the 5.0L gets somewhat neutered by a throttle-body restrictor and engine output around 420 horses to meet the 8.5 pounds per horsepower rule.

Fellow Mustang pilot, Craig Capaldi, in the No. 8 Ford Performance Boss 302S, also had a podium finish during the Motor City 100.

The Mustang Boss 302S competing in TA4 class begins life as either a fully assembled car from Ford Performance or a BIW (body in white) and built from scratch. They have evolved into what is known as the World Challenge spec which is a dry sump engine, the BOSSR transmission (Tremec) along with a new Torsen solid cambered rear axle (built from an 8.8 unit) that allows the teams to adjust the camber for various track conditions.

It was the 2014 Boss 302S Mustangs of Dean Martin (no not that one), running in TA4 in the No. 52 Picture Cars East Ford Mustang out of KohR Motorsports (a company he proudly owns) that claimed victory in Dual 1 and second place during Dual 2 at this year’s Detroit Grand Prix. Fellow Mustang pilot, Craig Capaldi, in the No. 8 Wolverine Bronze Ford Performance Boss 302S, also had a podium finish.

And while the bulk of the backing from Ford Performance goes into the IMSA/WEC Ford GT programs and Pirelli World Challenge, Martin does see the trickle down in technical and engineering support into the Trans Am Series. There are weekly discussions with the race group and a great deal of “technology transfer” between the Trans Am Mustang teams, Multimatic and Ford Performance.

Martin is already working on a new Mustang to compete in TA4 and if the on-track success he’s had in the old car is any indication, the new Boss will be very much like the old Boss.

Like most race cars, the interior of the Boss 302S is all business. Martin’s KohR Motorsports builds many of these Mustang’s to compete in a variety of classes.