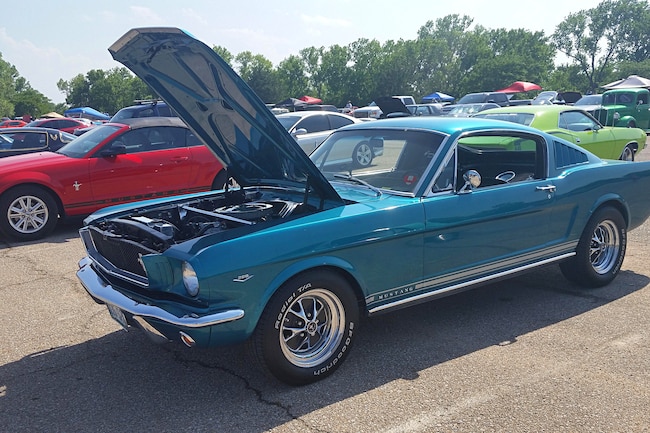 Ed Note: Courtney Barber is our roving Mustang-360.com reporter, and she is also the owner and builder of Mustang Monthly’s Project Road Warrior 1965 Mustang. The road warrior that she is, Courtney was taking the car on the 2016 Hot Rod Power Tour and doing it for the long haul, from start to finish, so we gave her the task of reporting the action from the world’s biggest road tour. This is her report on Day Six of the Power Tour, but also make sure to like her Facebook page, Facebook.com/TeamMustangGirls, and bookmark her website TeamMustangGirls.com. She’s doing some unique videos and reporting there as well, so to get the full scope of the Power Tour and learn what Team Mustang Girls is all about, check those sites out.

Day 6 of the Hot Rod Power Tour started in Oklahoma City. After a very entertaining tour of the city the night before from my favorite Outlaw, Chuck Seitsinger, we were off to a late start. But that's the beauty of the Hot Rod Power Tour, the schedule is more or less up to the individual, so you just do what you want. All along the route you see cars stopped at lunch spots and attractions—there’s no need to pass by something you may never see again!

On our way to the day’s show in Wichita, Kansas we had to make a special stop of our own at Kicker headquarters in Stillwater, OK. Not only are they one of Team Mustang Girls biggest supporters but their showroom is awesome! Where else can you go on a Thursday morning to rock your world?

When we arrived at the show at the Kansas Pavilions in Valley Center, KS it was hot again! Over 100 degrees and no clouds in site so we decided to give the Mustang Monthly Facebook fans a live tour of the show from Project Road Warrior—with the A/C on of course!

Tomorrow is the last day of the Hot Rod Power Tour with the final show at Kansas Speedway. Stay tuned to see the end of one amazing week!

Check out the rest of Mustang Monthly's coverage of the 2016 Hot Rod Power Tour!