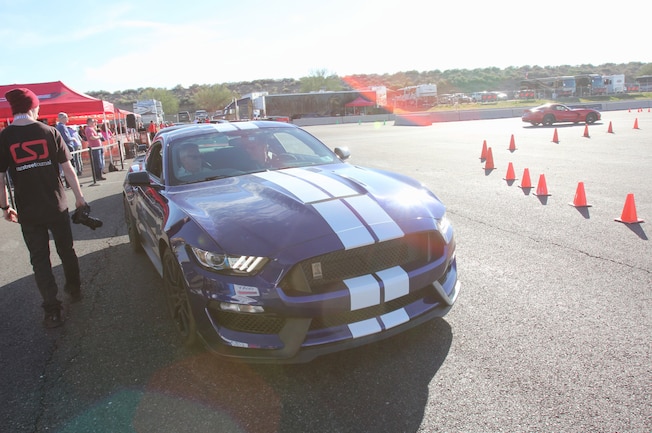 When the MM&FF and Mustang-360.com team headed to the 45th Anniversary Scottsdale Barrett-Jackson Collector Car auction, we knew there would be loads of action plus many muscle Mustangs and fast Fords. What we didn’t expect was the gala spectacle of performance and fun, from the auction block to the vendor area, to the super fun Ride-’N-Drive courses.

The Ride-’N-Drive compound included an off-road section, short autocross for enthusiasts to drive, and a ride along section with sprint sections and a few corners. Best of all, anyone willing to get in line could experience the brand-new Shelby GT350 with the 5.2L flat-plane crank Voodoo engine.

Ford Performance Racing School instructors were on hand to give enthusiasts rides in the brand-new Shelby GT350.

In addition, a few media folks (us included) got the chance to experience the new Shelby Terlingua Race Team Mustang, and a ride-along in the 350 horsepower Focus RS with the master himself, Ken Block at the controls.

While Corvettes and Vipers were also on track, the GT350 drew the biggest crowd. Fans loved the sound of the engine, and the Ford Performance Racing School drivers took advantage of the power, revving to maximum rpm on every lap. One passenger got out and exclaimed, “This is the coolest thing I have ever done!”

Fans got to experience the full thunder of the 526 hp Voodoo engine as these guys poured on the power at Barrett-Jackson.
In addition to the GT350 fun, Ford had many of its models for anyone to experience.

We also rode in the other Shelby, the Terlingua Mustang. With 750 hp on tap and Gary Patterson behind the wheel, we knew our ride would be thrilling. “Driving” Patterson laid into the supercharged 5.0 as the tires blazed. The Yellow and Black Mustang pealed from the gate, and despite the short course we were navigating; Patterson had no fear as he let the rear fishtail, providing maximum fun for the both of us. Shelby’s senior designer of research and development, Vince Laviolette, also gave journalists a thrill. Frankly, no one was having more fun than Vince and Gary.

But wait, there’s more. Ken Block, yeah, you heard of him, gave us a sample of what the Ford Focus is capable of. Lets just say the man has no fear and wicked-good car control. You can check back soon to read our interview with Mr. Block, and see how he helped develop the Ford Performance Focus RS.