Spring Break Shootout—the name alone conjures up images of bright paint, thunderous burnouts, and wheels-up Mustang hammering under the warm Florida sun. It’s a sight we see every March, when Ford fans and racers pack the stands and pits at Bradenton Motorsports Park for the Nitto NMRA Spring Break Shootout, presented by MM&FF.

Now in its 22nd year, the NMRA season opening SBS is stronger than ever. QA-1 True Street had 120 entries, the heads-up action was insane, and the bleachers were packed, creating a fun, energetic environment. Race fans were treated to four days of drag racing, including everything QA-1 True Street, to the screaming heads-up and index classes. And every NMRA event includes a massive UPR car show, giant manufacturer’s midway, endless swap meet and good old-fashioned people watching. But what makes the Spring Break Shootout special is the specialty races such as the Watson Racing Cobra Jet Showdown, Tremec Stick Shift Shootout, VMP Superchargers GT500 vs. Terminator Shootout, Livernois EcoBoost Shootout, Fluid Turbo Concepts Coyote Class and the MM&FF Spring Break Shootout, which pits the top 16 True Street competitors in a no-hold-barred, heads-up showdown for street-car supremacy.

True Street has enjoyed a strong following for over two decades and there have always been those dedicated to producing the quickest runs. The reward in Bradenton for producing a quick average is making the top 16 and participating in the Spring Break Shootout class, plus the extra cash and prizes.

With a multitude of True Street and SBS wins, Randy Seward is always a threat. The Orlando runner was all business, testing on Friday and then laying down passes of 8.33, 8.30 and 8.32 to score his 6th TS win (NMRA and NMCA) with an 8.32 average. He was the class of the field—the nearest competitor was Wall, New Jersey’s Mike Jovanis, who averaged 8.68. Jovanis, who has a few True Street wins of his own, showed potential, but was still tuning on his new combination. Jovanis was followed closely by Jeff Bloem (8.95), Raul Torres (8.99) and Grant Guise (9.90).

Saturday’s QA-1 True Street set the stage (and qualifying sheet) for the Spring Break Shootout. Seward, took the pole, and the bump was held by Bill Dudley who averaged 10.091. Seward got off to a winning start, defeating Edgar Negrod 8.47 to 8.97. Jovanis also scored a win over Sergio Rojas (8.66 to 8.78), and Jeff Bloem took out Randy Thomas (8.56 to 10.03). In each match, top qualified driver march though Round 1, this included Grant Guise, Kristian Guergo, Kurtis Forsgers, Raul Torres and Alex Garcia. In Round 2, Bloem scored a 9.82 to top Guergo’s 10.14, Torres beat Garcia 8.86 to 10.65, Forsgers upset Jovanis, and Seward singled as Guise couldn’t make the call.

Torres moved first in the money round, ripping a 0.052 light to Seward’s late 0.257 and by 60-feet the Black GT was a full car length ahead. The race looked dim for Seward, but miraculously, as they approached half-track the gap was shrinking and the race was getting tighter and tighter. With inches to spare, Seward’s powerful LX reeled in the GT, while blasting to an 8.53 at 166 mph, to barely nip Torres’ 8.81 at 152.

Seward overcame a huge holeshot in the final to score the SBS win.

“True Street and the Spring Break Shootout are so much fun,” said Seward, after claiming his third SBS win. I know everyone and it’s just fun to compete. I take a lot of pride in winning, but it never hurts when I lose because I like all the competitors,” he added.

Seward’s winning combination consists of a 363 Dart small-block with TFS high-port heads and a Garrett turbo that produces 25 psi. He generally launches on 9 psi and ramps in 25 psi for the run. The LX has over 1,050 passes on it and weighs 3,550 with driver.

“One of my secrets is that I now run a 30-inch tall tire and my car really hooks, producing 1.20 and 1.30 60-foot times. I leave with the same boost and change how it comes in,” Seward explained. “Winning is great, but when your car makes 3 consistent passes within 0.025 in those conditions, it feels really great. It’s always exciting, but I take what the car gives me.” 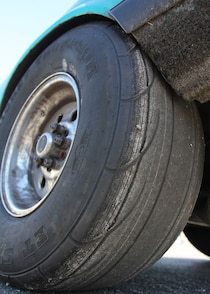