IMSA puts the “Stock” back in Showroom 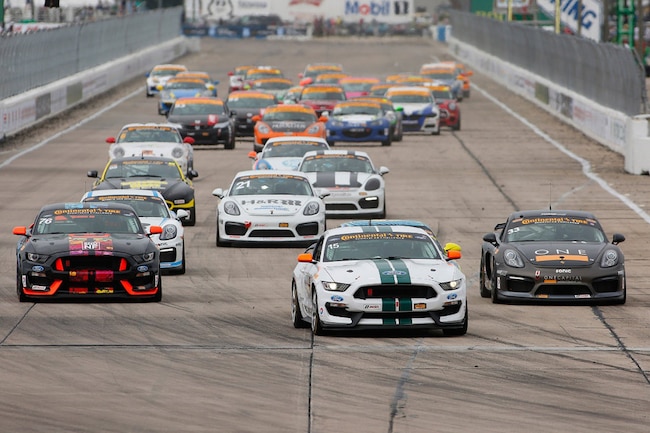 While most of the attention at this year’s 12 Hours of Sebring was focused on the Ford GT and how it would perform at its first outing at the granddaddy of American endurance racing, there was a contingent of two Shelby GT350R-C Mustangs in the house doing battle with the competition that was (in our opinion) just as important.

One of the best-kept secrets IMSA has is its Continental Tire SportsCar Challenge. It showcases sports cars from manufacturers worldwide and straight from the showroom floor. Well, not quite. There are modifications for both safety and performance that need to be done before they go out on the track. However, you could drive these things on the street to your local cruise night if you so desired.

The two Continental Tire SportsCar Challenge classes are Grand Sport (GS) and Street Tuner (ST). It’s the GS class where the Mustang Shelby GT350R-C comes to play with the likes of the Porsche 997 and Cayman GT4. The Ford Mustang is the only American brand in the series, and for whatever reason, the Camaro and Challenger are no-shows. It’s quite a pity that Chevrolet and Dodge don’t compete in this series anymore, as it would make for some great brand rivalry.

Getting dust kicked up your face is part of racing at Sebring. The Shelby’s looked strong throughout the race and almost had two podium finishes.

It was during Friday’s Sebring 150 that Scott Maxwell and Billy Johnson, in the pole sitting No.15 Multimatic Motorsports Ford Mustang Shelby GT350R-C, almost won their second Continental Tire SportsCar Challenge race in a row. They had claimed a victory in the opening round of the 2016 IMSA Continental Tire SportsCar Challenge back in January in Daytona before the Rolex 24. It was the Ford Shelby GT350R-C’s debut at Sebring, the track notorious for both its history and challenging racing surface.

“This is the first time the car’s been at Sebring, and it’s just awesome,” Johnson said. “The ride and the outright grip are awesome. It’s a fantastic job for (the Ford Shelby GT350R-C’s) debut at Sebring.”

The second Shelby GT350R-C was car No. 76, campaigned by Compass 360 Racing from Toronto, Canada. Driven by Paul Holton and Pierre Kleinubing, their Mustang was just shy of a podium finish and came in fourth.

Pole winner Scott Maxwell dominated in qualifying, and drove the opening stint in the Sebring 150 before handing off driving duties to co-driver Billy Johnson.

Since both the GS and ST classes compete at the same time on the track and among the herds of Porsches, Hondas, Mazda’s, Minis, and BMWs, the Shelby Mustangs look huge. The only “larger” race car is the Aston Martin Vantage, which also runs with the Shelby in the GS class.

Originally intended to be a “grassroots” entry-level class for IMSA, it takes a dedicated crew and a transporter worth of parts and equipment to play in the Continental Tire SportsCar Challenge; not quite you and a buddy with a pickup truck and an open trailer type of an event.

Yet, from the stands, these cars are just as fun to watch as the faster, more exotic (and more expensive) Prototype, Prototype Challenge, GTLM and GTD cars that compete during the same events. There’s passing, bumping, spinouts, and everything else that makes racing fun and exciting. It’s just with cars that look like production models.

So, if you haven’t checked out an IMSA event lately, you don’t know what you’re missing.

The other Shelby GT350R-C came from the Compass 360 Racing camp and barely missed a podium finish by coming in fourth.
Shelby drivers Scott Maxwell and Billy Johnson did the Blue Oval proud. They beat the Aston Martin Vantage and all but one of the Porches for a second place finish.