Our Favorites from the Auction

Jack Miller has a passion for Mustangs. Fortunately, his successful chain of Miller’s Ale Houses, which spans through 10 states, has provided the means to collect a few ponies. Miller’s stable consists of nearly 100 of the most sought-after models, including early and late-models, most of which are low-miles, super-rare examples of our favorites. Not to be locked away forever, buyers at the recent 45th Anniversary Scottsdale Barrett-Jackson Collector Car Auction had their chance to drive home in one of the 39 Fords that crossed the block at “no reserve.”

“While many car enthusiasts and collectors focus primarily on vintage models, Miller was among the first to understand the incredible performance and historical significance of newer Mustangs. In particular, he collected an unparalleled assortment of limited-edition Shelby, Saleen and Roush specialty cars based on the 2005-2014 S197 Mustang platform,” explained noted muscle car expert Steve Magnante.

The Jack Miller Barn collection was a big hit with buyers at Barrett-Jackson, as all 39 Fords sold at no reserve. One of the first to cross the block was this amazing 510 hp P-51 Mustang.

Adding to the value were signatures on the cars from Steve Saleen, Jack Roush and Carroll Shelby. Walking the rows of Miller’s collection at Barrett-Jackson was amazing. There were two low-mileage Roush P-51 Models, a few one-off paint jobs on Saleen Mustangs such as Grabber Green, and as you could imagine, the Fords came loaded with all the proper paperwork and literature.

These Mustang formerly resided in Jack Miller’s Mustang Barn in Jupiter, Florida. Open by appointment, Miller shared his herd with appreciative car clubs, school groups, friends and fellow enthusiasts. And at Barrett-Jackson, enthusiasts had their shot at each of the 39 Miller machines. According to Magnante, they were “grouped by type and sold in sequence.” Barrett-Jackson Vice President of Consignment Gary Bennett said, “I’m honored to handle the sale of these cars and I’m honored to know Jack. For him to gather together such a collection of significant contemporary Mustangs was very smart, and to offer this many modern muscle cars originally from that collection in one setting at auction is unprecedented.”

It doesn’t get much cooler than the 2008 Dan Gurney special-edition Saleen. This model, serial number 002, was boosted with a Saleen blower and jazzed up with Vista Blue paint with a “Boss 302” look, color-matched seats and awesome five-spoke wheels. Hammer price was $51,700.

A key detail that set these Shelby, Saleen, and Roush Mustangs apart is the virtually brand-new condition and low actual miles. 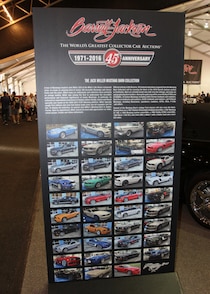