VIDEO: The Shelby Cruise-In at the Petersen Automotive Museum

The newly renovated Petersen Museum’s first car show was in tribute to Carroll Shelby on his birthday. 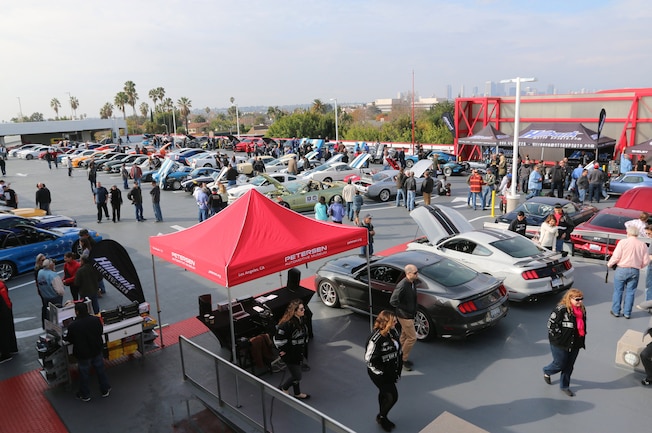 Carroll Shelby was born on January 11, 1923, and we don’t need to tell anyone how significant a force he was not just in the Ford and Mustang worlds but in the racing and automotive worlds in general. To celebrate his birthday four years after he passed, the Petersen Automotive Museum in Los Angeles hosted the Shelby Cruise-in, sponsored by Superformance and Hillbank Motorsports, on Sunday, January 12, 2016.

Though there was a threat of rain for the weekend, Sunday turned out to be a typical Southern California winter day—sunny and mid-60s—so the outside parking deck was filled to the brim with Fords and Mustangs of all kinds, but especially Shelby Mustangs and Cobras. Superformance brought out a bunch of their cars, ranging from several Cobras, a Daytona coupe, and the black GT40 that the company used to get Carroll’s approval to sell as a Shelby-licensed vehicle (and was also used for the event flier). Superformance CEO Lance Stander said, “We sell a lot of the GT40s, but I’m keeping that one. It’s special to us.”

Shelby American and Shelby Craft Beer and Beverages were also heavily involved with the cruise-in, and there significant cars of note. Local hot rodding patriarch Bruce Meyer brought his CSX2001 and Lynn “Mr. Cobra” Park’s incredible and 100-percent original Shelby Cobra CSX2307, with pale yellow paint and to-die-for patina everywhere. The car won the Petersen Perfection Award, and it would be a crime to restore this car; check it out in the photo gallery, along with all the other rides that showed up.