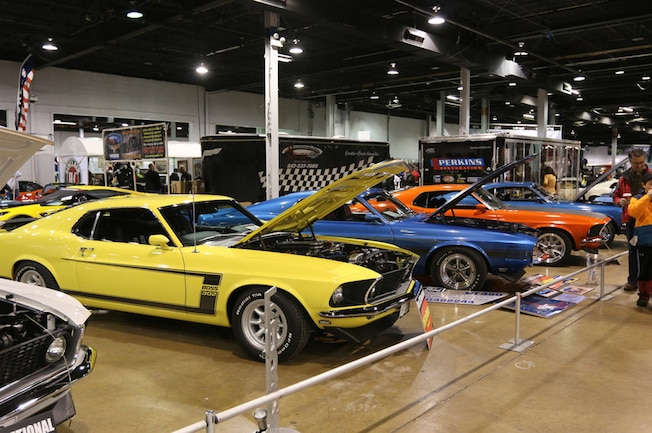 Historically speaking, there have been bigger displays of Boss 302s, such as the big Boss Reunion in Detroit in 2011. And who can forget the incredible Boss Reunion at Carlisle in 2005? Wow, time flies! But as far as quality and diversity, the Boss 302 Display at the 2015 Muscle Car & Corvette Nationals on November 20th and 21st, 2015 was as good or better than any previous gatherings we’ve witnessed so far.

Officials of MCACN seemed to agree. They were impressed enough to award the Boss 302s assembled by ringleader Bob Perkins (with help from friends Jim Cunningham and Rick Campbell) with the “Outstanding Display” award. Bob did not bring one of his personal Boss 302s but he went a step further, trailering Richard Boeye’s 1969 Boss 302—maybe the best unrestored of this first model year in the world—and filled his glass-sided trailer with a cornucopia of Boss 302 accessories that was a show all of its own. This was a follow-up to 2014’s collection of Boss 429 Mustangs, which was show here and was also Mustang Monthly’s April 2015 cover story.

The Perkins set-up in the immense Stephens Convention Center (adjacent to Chicago O’Hare International Airport) was very representative of Boss 302 history. “We had the Shinoda prototype Boss, which was kind of the beginning, and then we had the Shelby Boss 302 prototype, which was kind of the beginning of the end of the Shelby,” Perkins said. Of course, the display of ten Boss 302s also included three production 1969 models and five production 1970 models of various colors and descriptions.

The only problem now is how do Perkins and his cohorts top 2015’s Boss display for MCACN in November of 2016? What will be their encore? We can’t wait to see.

On the far left end of the Boss 302 display, John Grafelman of Hanna City, Illinois displayed what he billed as “Larry Shinoda’s personal Boss.” He couldn’t say Boss 302 because under the hood is a 428 Cobra Jet—the stock engine in the car Shinoda used at Ford Design to prototype the first Boss 302, this very car. Already a Rare Find featured in this magazine, we will soon run a story on the finished car with full details.

A Boss display needs at least one modified. MCA Gold Card Judge Terry Snyder of Hudson, Colorado tricked out his Bright Yellow ’69 Boss 302 with an assortment of Trans Am-inspired Ford performance parts. Mini-Lite wheels were de rigueur in 1969 on the racetrack, as was the Cross Boss intake with an Autolite inline carburetor, four-wheel disc brakes, and Ford’s Competition Suspension – all period correct. Synder won an award for “Best Day Two” car.

Shelby Mustangs of 1969 and 1970 did not option Boss engines. However, this 1969 Shelby G.T.350, owned by Billy Jay and Debbie Espich, proves there was a plan for a Boss 302-powered Shelby G.T. 350. Although this program did not get off the ground, one pilot car was built. 9F02G482244 was pretty much a Boss 302 in Shelby clothing, i.e. with Shelby fenders, front grille, hood, fog lamps, and other specific Shelby features, such as the unique interior trim and roll bar.

This Calypso Coral 1969 Boss 302 is owned by Phil Schultz, who is more than a Mustang enthusiast. He owns Vintage Restorations in Hartford, Wisconsin where he recently finished a ground-up restoration of the Shinoda Boss prototype for John Grafelman.

This Acapulco Blue Boss 302, owned by Richard Boeye of Denver, Colorado, is probably the best unrestored ’69 model in the world. We photographed this car for a full feature to appear later in Mustang Monthly. The car still has the battery it was born with, four original Goodyear tires, exhaust system, and much more.

Randy Bramwell trailered his 1970 Boss 302 from Anderson, Indiana. This Wimbledon White SportsRoof is one of the ultra rare W-code Boss cars. (W is Ford’s code for a 4.30:1 Detroit-Locker rear axle.) This car also came from Dearborn Assembly with a shaker hood scoop and a set of Magnum 500 wheels.

Mustang of Chicago in Bensenville, Illinois just completed this 1970 Boss 302 in time for the show. Norris Bristow of the same town owns this Medium Lime Metallic Boss featuring a shaker hood scoop for ram air and the standard Boss issue bright trim rings with hubcaps.

A Boss 302 display wouldn’t be complete without a Grabber color. Troy Kuyoth of Stratford, Wisconsin brought his shaker hood ’70 Grabber Green Boss 302 to the show.

Another W-code, 4.30:1 Detroit-Locker Boss 302 with shaker was Steve Grover’s ’70 model. This Medium Red fastback came from the factory with radio delete, deck lid spoiler, and sport slats. MCACN 2015 was this car’s first outing after a ground-up restoration to factory original. Grover’s Boss included a big display of paperwork, including the build sheet (found under the carpet), a factory invoice from the files of the late Lois Eminger, a Marti Report, and a “999” report from Ford Motor Company.

Perkins’ transparent trailer held a huge collection of Boss 302 memorabilia, including factory showroom banners, Boss 302 parts (such as an NOS set of rear window louvers), various Shelby and Ford over-the-counter intakes for a Boss 302, a complete Boss 302 engine, even vintage apparel such as jackets. The Boss 302 engine was topped with a very rare Ford 850 cfm “Cross Boss” intake with a two-piece magnesium top. Of course, Perkins also displayed one of the Trans Am racing Cross Boss intakes topped with a 1,400 cfm inline Autolite carburetor.