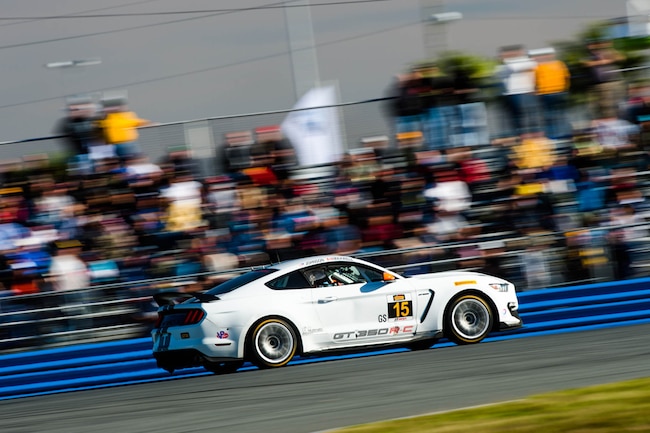 If you need the raciest of racey Mustangs, you go for the track-only version of the GT350R—where the R already stood for Race, and you get the GT350R-C. If you aren’t sure that the 350R-C is up to the task of your road-coursing, take a look at the podium from the 2016 Continental Tire SportsCar Challenge race at Daytona International Speedway.

Not one but two Mustangs graced the winner’s stairs after the race, Billy Johnson and Scott Maxwell in the No. 15 Multimatic entry—and yes, that’s the same Multimatic that is building the Ford GTs—and Pierre Kleinubing and Paul Holton in the Compass360 Racing GT350. Kleinubing and Holton were in a customer car, so it’s not just factory-backed efforts that win races.

A champagne-soaked Johnson said, “It’s the first time the car’s competed at Daytona and we’re really happy to be in victory lane with the car and a 1-2 finish for the GT350R-C. Scott did a fantastic job on the first stint and I just can’t thank him and the team enough for all the hard work and good job they do.”

Scott (Maxwell) smiled at the praise and said, “The hardest part for me was taking the first part and having to hold back, to save some car and not dice it up.”

Kleinubing and Holton had never raced their Mustang GT359R-C before, although both are experienced drivers. “It’s a very different car to drive, for me,” Holton said. “I’ve driven Street Tuner and GT cars, nothing with that kind of torque and that small of a tire. The Continental Tires are really good. We had a really green track because it was raining all week and this was the first dry day. In practice, we were just drifting around the corners in a spray. I didn’t have a single dry lap going into that race, so as we went on, the track got grippier and grippier and then greasier and greasier, so it was quite a handful, but really fun.”

He then told us he watches Roadkill. So there you have it. HOT ROD and Roadkill, brain food for winners.