All 6 Shelby Cobra Daytona Coupes Together at Goodwood

With its vintage theme and countless examples of classic racing vehicles, the Goodwood Revival is a spectacle that needs to be seen to be believed. 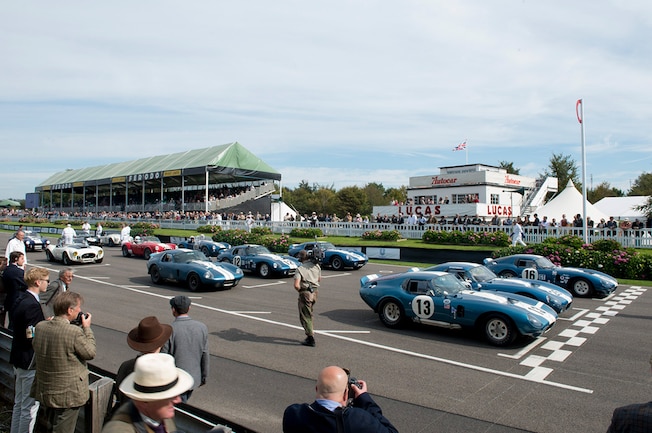 The UK’s Goodwood Revival is an event like no other. A yearly outing for classic and often notable period race cars, it is firmly fixed in the calendars of individuals who appreciate seeing these historic performance vehicles going head-to-head on the race track. The range on show is always impressive. With Ford heavily represented—from GT40s in the Whitsun Trophy to Fairlane Thunderbolts in the St. Mary’s Trophy, the action delivers a thrilling assault on the senses. A highlight of the event is also the one-hour, two-driver RAC TT Celebration race at dusk, which features AC Cobras battling it out with the likes of Jaguars, Ferraris and Corvettes.

A visit to the Revival is like a step back in time. Period dress is very much encouraged, to the point where attendees wearing modern-day clothes look very much out of place. A quick glance around you, and it’s clear that visitors don’t simply throw on any old garments; they make a real effort putting together their outfits, ready to pose for pictures with the cars and stars which they so rarely get to see.

So what was special this year, attracting the record sell-out crowd of 149,000? Well, in amongst the fantastic racing around Goodwood Motor Circuit, there was a great Stateside presence, as always. Perhaps the biggest celebrations of note were those surrounding the Shelby Cobra Daytona Coupe. It was the first time that all six original examples, including the prototype, had been brought together in one place. As Neil Cummings, Co-CEO of Shelby International said, “Even in ’65, they weren’t [in the same place at the same time]; they were all at different places.” 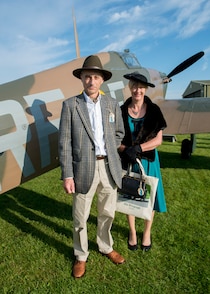 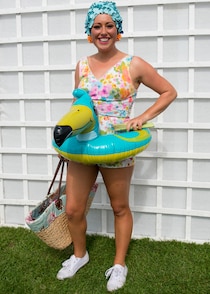 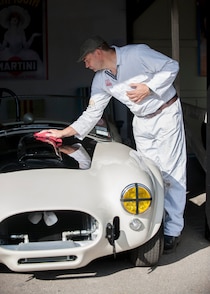 Spectators were treated to a host of ways to enjoy these exclusive cars. From the comfort of the grandstands, they could be seen taking a not-so-stately tour round the track, before heading back to their paddock. As you might imagine though, this was never going to be an ordinary parking spot. Instead, it was a recreation of the 1965 Sebring pits (1965 being the car’s World Sports Car Championship winning year). As if proof were needed, the area provided yet another example of the unrivalled access granted to visitors at the Revival. It was clearly appreciated, as demonstrated by the beaming smiles of anyone who got close enough to peer through windows or examine the bodywork in close detail.

Elsewhere on site, over at the Retail Village, the folks at Bill Shepherd Mustang were putting on a show of their own. During the afternoon of the first day, they got together with Carroll Shelby International and Shelby American to recreate a 1965 press conference. In the cast were, among others, Aaron Shelby (acting as his grandfather). Following the re-enactment, an autograph session was then arranged with original team members including Peter Brock, Allan Grant, and Jack Sears. But perhaps the biggest draw to the stand was a shining beacon in the form of the new aluminum-bodied continuation Daytona Coupe, which had its launch at the show.

With so much history surrounding the vehicle, it was good to have Steve Wood of Panavia on hand to explain. “The Cobra Coupe,” he said, “was a wonderful machine because by putting a very aerodynamic body on it, like the one designed by Pete Brock, the car instantly was 25 if not 30 miles an hour faster and used one third less gasoline… Jack Sears is the only gentleman that ever raced all three configurations.”

It’s always interesting to hear what the event’s appeal is for these guys, and for Bill Shepherd himself, the answer is simple. “Driving. Racing!” he said. “I’m in a ’63 Galaxie. [Renowned racer] Jochen Mass is driving with me.”

Of course, it’s not just all about Cobras at the Revival. One of the notable attractions each year is the Earls Court Motor Show display, which offers a small detour from the main theme. In a nod to the original display in London (now sadly no longer with us), in this large covered area, marques such as Maserati and BMW show off their current models alongside classics from the 1940s-60s era. This year, Ford had an interesting display centered around a ‘Henry’s Cavern Club’ set. With a bright yellow 2015 Mustang nestling comfortably alongside gleaming examples of a Mondeo Vignale Hybrid and original Zodiac, visitors were encouraged to take their spot for a photo opportunity, before collecting their complimentary picture.

The great thing about these Goodwood shows is that they always offer something a little different in addition to what you’re expecting. Yes, the majority of people go along for the cars, but first-time visitors are often surprised to see so many motorbikes, the aviation displays and character actors, not to mention the fairground, live music, Bonham’s car auction, and more. There are often significant tie-ins, too; for example, 2015’s event coincided with the 75th anniversary of the Battle of Britain and featured a 12-Spitfire flyby.

A walk around the many paddocks always reveals a plethora of stories - about individuals, experiences, racing heritage and vehicle history. Talking to Darren Ramsay, who was working on a GT40 entered into the Witsun Trophy by Richard Meins, a fascinating story transpired. “It’s a 1967 Ford GT40, running to a 1965 specification, chassis no. #1070. It was originally a road car, sold to the States new. Raced in a couple of club events, it actually crashed and caught fire in 1970, I believe. It spent ten years in litigation and court cases and was bought by the current owner as a burnt-out wreck and restored to how it is now.”

As part of the restoration, attention to detail has been paramount, right down to the car’s colour and livery. Darren continues: “I managed to contact the second owner’s brother through Facebook and he sent us those photos [displayed in the windshield]… That’s when the first owner had it, and we’ve copied the livery, the rings around the roundels, the decals on the rear bodywork, that sort of thing.”

Each year, Goodwood brings something new to the table and as its popularity with American visitors continues to grow, it’s not surprising that we see bigger and bolder displays of high-performance machinery flexing its muscle. Circuit racing is, of course, the overriding theme, but this year also saw representation from hot rods in the Gassers display, with an on-track burnout demonstration each morning.

The event spans several days and, much like the Festival of Speed earlier in the year, members of the public often find that a single day spent at the show isn’t enough to see everything. There are plenty of options for camping and local accommodation; taking advantage of this opens up the possibilities further still, with festivities at the on-site bars stretching into the evenings.

From famous Le Mans winners to futuristic road car prototypes of the 1950s, world-class drivers to classic racing bikes, the Revival has something to offer every visitor. For more information, you can check out Goodwood’s website www.goodwood.co.uk.