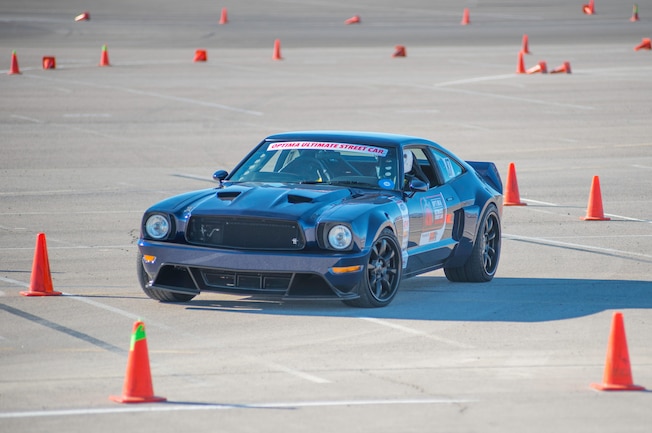 You might remember Brett Behrens’ head-turning and unique ’78 Mustang II from the May 2015 issue of Mustang Monthly. If not, here’s where you can find that story: A 1978 Mustang II Worthy of Our Affection

After shaking the car down and making some appearances at shows through the year, Brett decided to throw his hat in the ring and gain entry into the 2015 Optima Ultimate Street Car Invitational (OUSCI). Since he didn’t make it to any of the OUSCI qualifying events, Brett had to take his chances and see if he could gain one of the coveted Golden Ticket entries into this year’s main event. Fate smiled upon him, and at the 2015 SEMA Show Brett’s name was announced as one of the Golden Ticket winners.

For those not familiar with it, OUSCI takes place at Las Vegas Motor Speedway (LVMS) now, after moving from Pahrump, Nevada, in 2014. Day one of the event consists of the autocross competition and the speed/stop challenge set up on one of the large asphalt pads at the LVMS complex. Day two things move to the LVMS road course, where groups of cars from the three main experience level classes are let loose upon the twists and turns of a full on pro course to test their driving skills and cars’ mettle. To see a full story on the event, go here: Optima Ultimate Street Car Invitational 2015: Fords Chase OUSCI Title Photo Gallery

Since Brett’s car uses the suspension and transaxle setup from a C5 Corvette underneath the highly modified and lightweight Mustang II body, its agility and handling prowess was more than capable of setting some fast lap times, especially when combined with its torquey 6.5 liter V-10 engine. Unfortunately the car’s T-6060 six-speed expired after the third road course run on Sunday, but Brett still managed to place 49th in the competition with his times from both days of the event.

“In the turns I could easily pull away from the guys competing with me, but on the straights they had more top end power and could catch back up and take me. With some more tuning and mods to the V-10, more horsepower could be had that would equalize things on the straights.”

Next up for the Mustang II is a new transmission, then a full detail job before it heads off to auction at the 2016 Barrett-Jackson Scottsdale event. And check out the gallery here for action shots of car in the heat of battle, along with the other early Mustangs of the OUSCI.